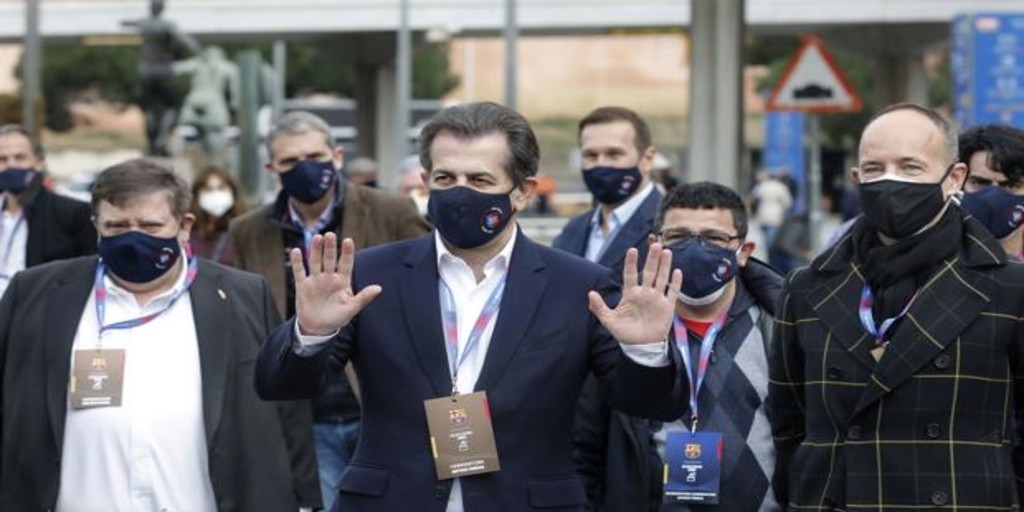 The Barcelona partner is aware of the importance of the current elections to put an end to more than four months of misrule. This is indicated by the participation rate, which is increasing minute by minute and that already started with the 20,662 votes by mail that were received before the electoral day began. With a little less than three hours to go until the polls close, Barcelona has already exceeded the participation of the last elections. If on July 18, 2015, 47,270 of the 109,637 members of the census voted (43.12%), this time there are already 51,049 members who have exercised their right to vote: 20,662 by mail and 30,387 in person. That is, 46.29% of the total census of 110,290. Remember that the elections that registered the most participation were those of 2010, with 57,088 votes, which assumed a participation of 48.11 percent. They were won by Sandro Rosell, who became the most voted member in the club’s history. They were followed by the 2003 elections, which Laporta won, with 50,745 votes, 53.79 percent of the census, which was the highest at the time, with 118,665 fans with the right to decide. Now the second place is for the current elections.

The institutional, economic and sports crisis in which Barcelona finds itself is so worrying that nobody has wanted to miss the opportunity to exercise their right to vote. The example has staged it Leo messi launching a silent message to all partners. The Rosario, who had never participated in an electoral process, went to the Camp Nou before noon, accompanied by his son Thiago who jealously guarded the ballot. A gesture that many interpreted as an approach to the possibility of renewing their relationship with the club. “That Messi and other players have come to vote is proof that Barcelona is more than a club and that the players can also decide who will be the next president in an election that has had many obstacles due to the coronavirus and the pandemic” , Laporta explained, seeing the images of Messi voting and giving himself a mass bath, with fans chanting his name and asking him to stay.

«The more participation, the more legitimacy will have the elected president. We are experiencing a pandemic but it is necessary for the president of Barcelona to be legitimized. We have all moved these days when we have had an important situation and for the Barça member there is nothing more important than the club, “he claimed Toni Freixa, in a petition that Laporta and Víctor Font also signed. Precisely, to minimize the risks of contagion by the Covid, the absentee ballot (22,811 members availed themselves of this possibility) and the elections were decentralized in six venues (Camp Nou, Tarragona, Lleida, Girona, Tortosa and Andorra) in which the remaining 87,479 members were summoned. However, mobility restrictions have caused damage to some members who have traveled from outside Barcelona to vote, since the Mossos d’Esquadra have placed controls to avoid violating this restriction. Several partners have commented on social media that they have been fined for skipping the district confinement. The game between Atlético and Real Madrid has also been a reason for comment among the fans who have gone to vote in the afternoon. It was curious to see how the Camp Nou celebrated a Real Madrid goal, and it is that Benzema’s draw reopened the League and Barcelona’s options to fight for the title