journey to the entrails of the ‘festival’ seed, the Matinales del Price 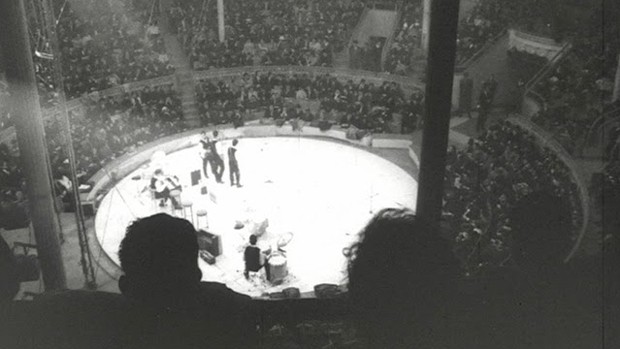 At the end of the 1950s, in Spain, group competitions had already been held in colleges and even in the Palacio de Deportes of the Community of Madrid, but the first mass gathering of bands that transcended the concept of ‘contest’ was the Matinal that was held on November 18 at the Teatro Circo Price, at that time located in the Plaza del Rey in the capital.

The idea for this first Spanish pop festival came from Miguel Ángel Nieto, brother of Pekenikes drummer, Pepe Nieto (years later, founder of Radio Antena 3), who worked a real miracle by convincing the owner of Price to carry out his ambitious project there. “Like everything in life, if you want to do something, you have to attend to the saying ‘whoever wants fish to get his ass wet'”, he says. Ignacio Martín Sequeros, the only current member of Pekenikes that was in that first edition of the Matinales del Price.

“There were people who wanted to do things, but without exposing themselves, without risking, and they never achieved anything. These experiments were not being carried out in Spain, because for our government we were nothing more than ‘a bunch of hairy men’. The police were afraid that if the first festivals that were held in England were reproduced, the riots that sometimes accompanied them would also be reproduced. The problem they had is that at the same time, they began to want to give an image of openness. That is why, thanks to the efforts of Miguel Ángel Nieto, it was possible to do the Price thing, ”explains Martín Sequeros.

Nieto was studying journalism, and he also devised the Matinales as a way to learn to organize shows. «The difference with events like El Enlace, which was held every Sunday at the Calasancio school in Narváez, is that the Matinales were not a family affair, with the students’ parents and others. It was of young people who were on their ball, something that had never been seen in this country until then, ”says Martín Sequeros.

That November 18, 1962, was the first time that hundreds of young people released from guardianship enjoyed professional concerts by their idols. Ontiveros, Dick and Los Relámpagos, the Filipino ‘singer’ Eddy, Los Tonnys, Los Pekenikes and The Diamand participated, with Miguel Ángel Nieto presenting them with a microphone that hung from the ceiling in imitation of the famous boxing master of ceremonies Bobby Deglané.

Behind the scenes, it was less glamorous. At that time the Price hosted shows with animals that lived there in their own ‘dressing rooms’, with the consequent smell for the facilities. «The first thing I remember about the Matinales is the plague of the shit of the elephants when entering to leave our instruments. That was scary, like being in the jungle, “he says. Micky, the leader of Los Tonnys (later Micky and Los Tonys), a group of “daring young people who did not give everything the same, and who joined everything,” he says between laughter. «Miguel Ángel came to meet us at the Castellana Hilton, where we always used to be. He asked us to participate and we didn’t think twice. On the night of November 17, Micky and his cronies partied until five in the morning. «We finished cooked, hoarse, and after a while we showed up at the Price, at ten in the morning … an hour before the concerts started. We had the last beer, and pa ‘inside. As we were kids, the body held, haha! ». Micky remembers being excited when they plugged in their equipment “on the same stage where Pinito de Oro had made his trapeze shows,” but things got complicated before they started. «At that time, two electrical currents were used, 125 and 220. Our devices worked at 220, with which, if you weren’t vigilant, you risked that some smart guy would make you the lollipop by changing the cables, so that you would sound horrible. We had to literally watch over the team. But we devastated: I still did not call myself ‘the rubber man’, but I already had that spasmodic roll that left people stony, especially because the other singers sang with the microphone that fell from the ceiling, but I had taken one that I plugged into an amplifier. It sounded like ass but it allowed me to get off stage and jump into the audience, a total punkada. The only one who could compete in savagery with Micky in the Matinales was Henry ‘Le Diable’, “I don’t know if he was a pieds-noirs or a member of the OAS, a very impressive guy who later opened a whorehouse in Alicante”, he says the singer, who assures that there was “a rivalry to see who was the best of the day.”

“We did a quick microphone test at ten o’clock in the morning, without further ado,” explains Martín Sequeros, who remembers more camaraderie than Micky among the participating musicians. «At that time we were six or seven bands that were active, and we were always on stage. We already knew each other and there was no rivalry between us, although each one went his own way. It was said that we were rivals of Los Relámpagos, because they also made instrumental music, but not at all. The audience, recalls the Pekenikes bassist, was amazed by the sound equipment that some of the bands were running. “We carry an Italian tape echo equipment, Echolet brand, which we had imported to perform there. What Lucas (Sainz) was doing with the guitar reminded people of the Shadows, and they were stunned hearing him why it was something they had only heard on the radio».

The Matinales del Price “represented the birth of a modern national music, since the groups until then were widely dispersed, performing at parties of higher schools, and were only known in their neighborhoods or universities,” Nieto himself would tell ABC in 2012 , when the fiftieth anniversary of the Matinales was celebrated. “That was a way of presenting them in society, and that they could be seen by the directors of the record companies, who began to realize that there were good musicians here.” Because of charging, little, as Micky reveals. «They paid us the taxis, not a fucking hard more. Although I understand it, because it was a very big risk for Miguel Ángel ”, who, according to Sequeros,“ did not give any economic pitch but rather the opposite ”.

Micky remembers with youthful effervescence the moments before the start of the first edition. «The Plaza del Rey was filled with gushing. We saw people coming from the Price cafeteria, which was right next door, and the scene seemed tremendous. The girls, the grays watching the gangs of Bola, Los Ojos Negros, Los Trompas… we seemed to be living an adventure ».

Who did not find it so exciting was the journalist Adolfo Marsillach, who later published a column to condemn those rowdy meetings of ‘rebels without a cause’, to the surprise of those who took him for a ‘liberal’ person. “Years later I shot a champagne ad with him for Christmas, and I regret not having thrown his eggs, like ‘why the hell did you write that?” says Micky.

The article would nevertheless cost him a good scare, since as Micky recalls, “in the next morning after publication, the slogan of ‘burn down Marsillach’s house’ was circulated among the people”. At the end of the concerts that morning, several gang members went to the journalist’s home, ready to reduce her to ashes. Marsillach was not there, but the housekeeper in charge of the cleaning noticed the arrival of the crowd and called the police, who dispersed the attackers, presumably among whom was the famous ‘El Bola’. “It boasted of being the most modern and scandalous,” recalls Martín Sequeros. “He had some chains hanging from his arm, he had four or five other thugs who supported him, and they made some trouble from here, I’ll wait for you.”

The suspension of the Matinales was precisely due to the fact that in one of the editions held in February 1964, ‘El Bola’ left the Plaza del Rey towards Gran Vía, accompanied by his band, breaking streetlights and shop windows as he passed. They reached the Banco de España metro station, and there he was detained by the police. But someone took photos of the scene and it ended up in the press. “When the government saw it, it said ‘letting the long-haired guys do whatever they want is over! And the story of the Price Matinals is over,” recalls Martín Sequeros.

In the booklet of the triple CD of homage to the Matinales del Price published nine years ago by the Rama Lama Music label, it is said that Miguel Ángel Nieto went to protest at the district police station. But the die was cast: “Son,” the police chief told him, “dedicate yourself to something honest, moral, and constructive.”