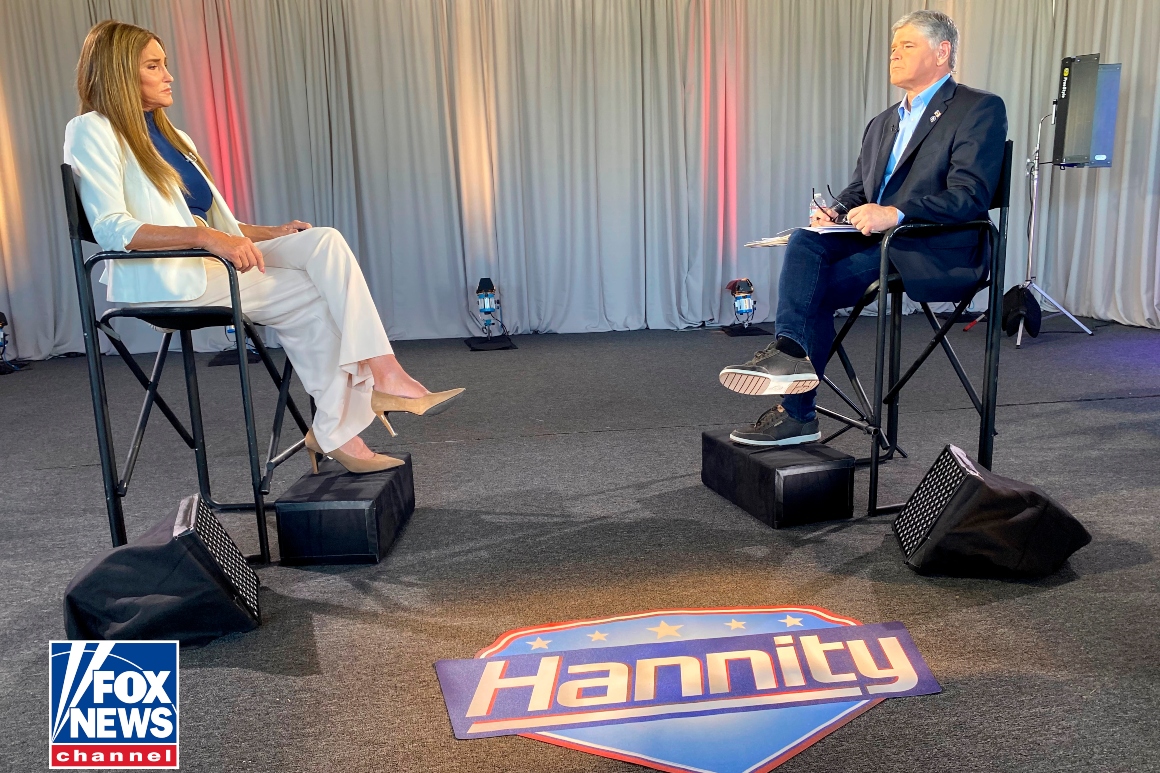 GOP recall candidate Caitlyn Jenner may have played right into Democratic Gov. Gavin Newsom’s hands when she lamented on Fox News that a neighboring private plane owner at her airport hangar is abandoning California because he “can’t take” seeing homeless people anymore.

In her first interview as a political candidate, Jenner told Fox News host Sean Hannity on Wednesday that she liked how former President Donald Trump “shook up the system,” supported his border wall effort and hasn’t agreed with anything President Joe Biden has done this year.

But it was her plane anecdote that went viral. “The guy right across, he was packing up his hangar,” Jenner said during the sitdown in her own Southern California plane hangar. “And he says, ‘I’m moving to Sedona, Ariz. I can’t take it anymore. I can’t walk down the streets and see the homeless.'”

In less than 24 hours, that comment has drawn more than 5 million views on Twitter and prompted a caustic string of rebukes, potshots and one-liners mocking the TV reality show star as out of touch. It raised the more serious question of whether — in one brief moment — the candidate disarmed one of the Republicans’ most effective caricatures of the wealthy Democratic governor as a tone-deaf leader who dined at the French Laundry during the pandemic.

Some said the quip delivered a flashback to Jenner’s uber-upscale “Keeping Up With the Kardashians” persona — not exactly a gubernatorial profile.

“It was a disaster, one which placed Jenner in exactly the same mold … of the French Laundry thing,” GOP strategist Robert Molnar said of the hangar comment. Except this time, it was “my elite wealthy friends are jumping into their private jets and shutting down their hangars and moving to Arizona because they don’t like homeless people.”

“Homelessness is a problem — and you need to solve it,” he said.

Jenner, 71, has spent plenty of years in the limelight, from her gold medal win in the 1976 Olympic decathlon to her years on reality TV and high-profile interviews on being transgender. But she has never before run for office and has only a few months to convince voters she can lead the world’s fifth largest economy — one burdened by natural disasters and a severe housing shortage along with the ever-changing Covid-19 crisis.

After the Fox News interview, Jenner’s GOP competitors saw an immediate opening to underscore her status as a neophyte who has never dirtied her hands wrestling with the issues affecting average Californians. For weeks, they’ve been desperate to find a foothold as Jenner’s candidacy drew national attention — so desperate that Republican hopeful John Cox brought a live Kodiak bear to a campaign stop in Sacramento this week.

“It just shows the world that she lives in,” said Steve Puetz, a spokesperson for Republican candidate Kevin Faulconer, the former San Diego mayor. “She’s a celebrity and social media person, and extremely wealthy. And her friends and experiences are a little different than most Californians.”

Puetz said voters will see the clear difference with such moments. Faulconer “has been dealing with trying to make impact in the homeless crisis in San Diego for years,” and has discussed at length “what works and what doesn’t” to address the problem, Puetz said.

But other Republicans were willing to give Jenner more leeway. Conservative radio host Jennifer Kerns, a former spokesperson for the California Republican Party, said the reality star merited an “A-” for her Hannity appearance, saying she is “getting her sea legs” and effectively introducing herself to voters — especially GOP voters who will be crucial to her political fortunes.

Jenner’s appearance was a concerted appeal to Republican voters considering the Fox News venue alone, where Hannity said he was broadcasting from “the united Socialist state” of California. She admired Trump for being a “disrupter” though she said there were “some things I didn’t agree with,” acknowledging her past criticism of how Trump handled transgender issues.

She also aligned herself with Republicans on immigration.

“I am all for the wall, I would secure the wall. We can’t have a state, we can’t have a country, without a secure wall,” Jenner said.

While professing empathy for immigrants, Jenner noted, “I mean, some people we’re going to send back, OK, no question about that.” Asked if she would eliminate sanctuary status of California, Jenner told Hannity, “I would do my absolute best to do that.”

Dan Newman, a Newsom campaign spokesperson, said the most revealing moment in Jenner’s interview — and the ones that will haunt her even more in coming months — was her embrace of the former president who remains historically unpopular with California voters.

“When you say that you oppose every single thing that Joe Biden is doing and believes in — stimulus payments, accelerating the vaccine, infrastructure improvements. support for schools, just across the board — it really makes it clear that this [recall] is all Trump.”

But Kerns said Jenner’s point on the hangar comment was “not that people don’t want to look at the homeless — it’s that the politicians and the elected officials in California who are in charge aren’t actually doing anything about the homelessness crisis.”

Republican consultant Dave McCulloch said in an interview said that Jenner’s initial appearance achieved her goal of “making that transition from celebrity to politician,” arguing that she can lay out more detailed policy prescriptions as the campaign unfolds. McCulloch argued that Jenner openly talking about her wealth is preferable to Newsom downplaying his affluence.

“It wasn’t relatable to the average Californian going through economic hard times but in terms of electing a politician it’s less of an issue than ever before — look at Donald Trump,” McCulloch said.

At the very least, Jenner missed an opportunity in the Fox News interview to lay out what she would do to solve homelessness in California. Her campaign website this week added an issues page, where she said she would work with local leaders to remove restrictions and “revisit” any regulation that blocks affordable housing construction. She also said she would push large employers to help build housing and come up with a plan addressing physical and mental health challenges.

But all she said to Hannity on homelessness was the hangar anecdote.

Jeremy B. White contributed to this report.