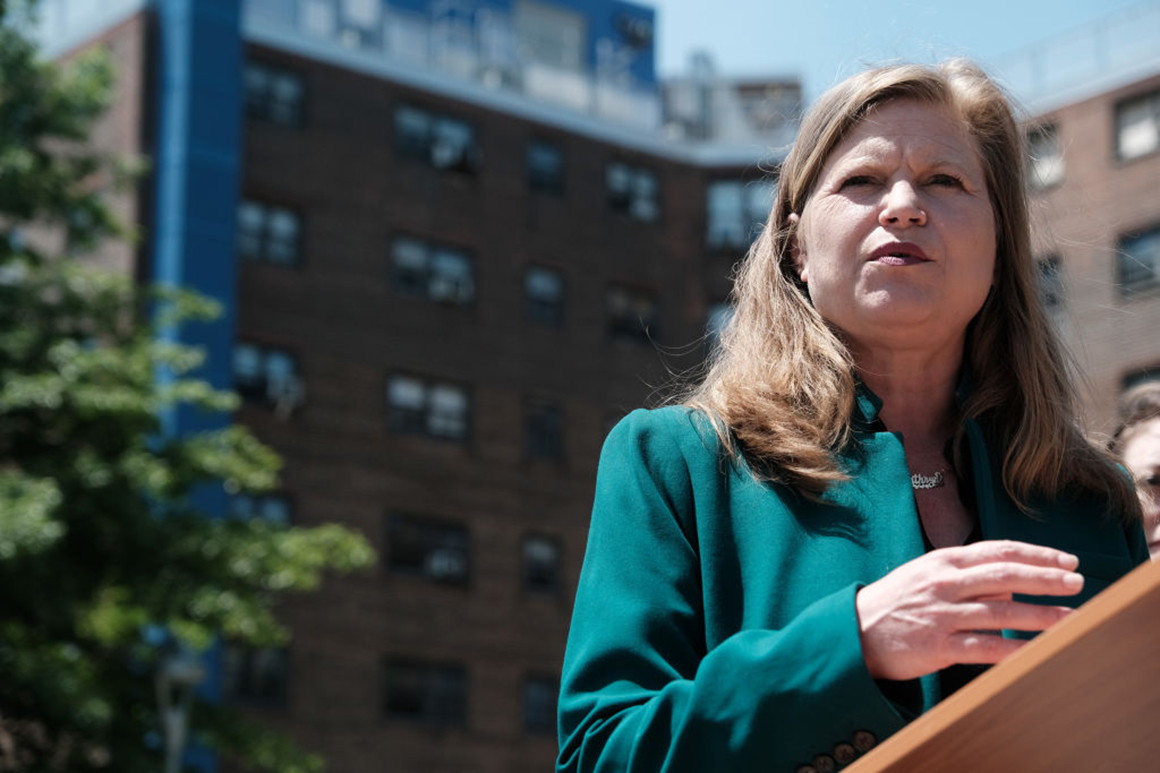 After years in the wilderness of the de Blasio administration and waning influence in Albany, charter schools are gaining a foothold in the city again — if the race for mayor is any barometer.

The three leading candidates in the Democratic primary are decidedly supportive of charter schools — a dramatic shift from when Mayor Bill de Blasio was elected eight years ago and another sign of the citywide electorate hewing closer to the center in the June 22 Democratic primary.

Brooklyn Borough President Eric Adams, former city sanitation commissioner Kathryn Garcia and entrepreneur Andrew Yang — all of whom have hit first place in recent polls — have pledged to allow for the creation of more charters, publicly-managed but privately run schools that occupy space in public school buildings, if elected.

Of those three, Garcia has gone the farthest: The city’s former sanitation commissioner recently said she supports lifting the charter cap — a limit set by law on the number of new schools that can be created — during a forum hosted by Civic Builders, Democracy Prep and Achievement First.

Adams wants to keep the cap but called for closing failing charters and duplicating successful ones during a town hall hosted by the United Federation of Teachers, the city’s teachers union. He also said he supports smaller charter networks and unionizing charters.

Yang also wants to keep the cap, but is pushing to resurrect “zombie charters” — schools that won a charter but either closed or never opened. He and his former test prep company in 2008 put up at least $110,500 to help start a charter school in Manhattan.

De Blasio has continually butted heads with charter leaders, most notably Eva Moskowitz, the CEO of Success Academy and, for many years, the face of the city’s charter movement. In Albany, charters reaped the benefits of Democratic Gov. Andrew Cuomo as well as the GOP-controlled state Senate, but saw that support slowly dissipate, culminating in a Democratic takeover of the state Senate in 2019.

Richard Buery — president of the charter network Achievement First who also served as a deputy mayor for de Blasio — attributed the shift to charter leaders doing more work in their communities, more robust electoral and political work and polling showing most Democratic voters support families having the choice to send their children to charters.

The ongoing fight over the city’s notoriously segregated schools has helped. De Blasio’s attempts to diversify the city’s best-performing district schools came late in his tenure and — in the city’s elite public high schools at least — segregation has worsened on his watch. The city’s reluctance until recently to remove admissions screens for the high schools and high-performing middle schools may also be driving more support from Black and brown families for alternatives to the district schools.

Roughly 138,000 students currently attend 267 charter schools citywide, and Black and brown students that come from homes with low incomes make up the majority of those students.

“As I look at the vast majority of [the mayoral] field, what I see is a bunch of people who are not approaching this question from a deeply ideological standpoint,” Buery said, adding they’re “open to conversations or asking the question, ‘What [is] best for children?'”

Yang has the support of donor Jeff Yass, co-founder of investment firm Susquehanna International Group, who said Yang would be the best candidate for school choice. Jenny Sedlis, executive director of pro-charter group StudentsFirstNY, is leading a political action committee on Adams’ behalf.

Other charter supporters, including hedge-funders Kenneth Griffin and Daniel Loeb, contributed a combined $2 million to the Adams PAC. Griffin and Loeb also donated $500,000 each to the Comeback PAC run by public relations consultant Lis Smith to support Yang.

Sedlis, charter supporters say, has been a crucial player in the new energy around the schools. She took a leave of absence from StudentsFirstNY to run the pro-Adams effort, and even supporters of rival campaigns are singing her praises.

“Jenny’s the consummate coalition builder, she knows how to mobilize just a whole range of stakeholders — parents, philanthropists, politicians in pursuit of a common cause,” said Rep. Ritchie Torres, a co-chair of Yang’s campaign and one of a few pro-charter Democrats. “Most people in politics over-compromise and under-deliver. Jenny, in my experience, under-compromises and often over-delivers.”

He alluded to a discrepancy between rhetoric on Twitter and what rank-and-file Democratic voters are expressing, particularly in communities of color.

“There seems to be a set of people who are shocked that the leading candidates for mayor — Andrew Yang, Eric Adams and Kathryn Garcia — have pragmatic views on education and public safety,” Torres said. “I’m not shocked at all given the conversations I have on the ground in the community.”

Sedlis said she was around when de Blasio put a “big target” on charters in 2013 — when it was politically popular “to say ‘let’s annihilate them.’”

Times have changed, she said.

“My view is if you are a champion of charter schools and of kids and families, I wanna support you, I wanna pull resources together, voters for you and put an infrastructure around you to ensure that you can get elected, keep your seat,” Sedlis said. “The charter sector is a community that supports our friends.”

James Merriman, CEO of the New York City Charter School Center, also credited Sedlis and StudentsFirstNY with helping improve the political fortunes of charters and said mayoral candidates are, at the very least, willing to work with charters. Candidates Shaun Donovan and Ray McGuire — who also wants to raise the charter cap — have both spoken in support of charter schools, though their campaigns have yet to catch on with voters, according to the polls.

“We decided that the future was with the Democrat Party in New York… we also knew it was the more natural party for charters to be in,” Merriman said. “The teachers union’s politics made that almost impossible to actually do but… we’ve become part of the family of interests and activities and a sector that the Democratic party looks to.”

Another major piece of the shift is the growing presence and recognition of leaders of color within the charter movement as well as charters pursuing less punitive and draconian practices.

The Black Latinx Asian Charter Collaborative, a partnership of public charters, was established in late 2018. The group recently hosted a forum on education equity issues with Adams and McGuire.

“[We] met with a bunch of elected officials [in Albany] who were quite frankly shocked that there were charter schools run by people of color and that was the thing that we heard repeatedly,” said Miriam Raccah, executive director of Bronx Charter School for the Arts, who is part of the collaborative. “When electeds specifically were reacting to charters, they were not aware that there were charters in their communities that were run by and founded by people of color, which was just shocking to all of us.”

Even as charters see a new dawn of sorts this election season, there is still a movement of families and advocates who remain wary of charter growth and are taking steps of their own to fight it. City Comptroller Scott Stringer remains a strong candidate in the race and his skepticism over charters was among the factors that won him the endorsement of the United Federation of Teachers — the city’s powerful teachers union which is helping fund a multimillion dollar, independent expenditure in support of his campaign.

Maria Bautista, campaigns director for the Alliance for Quality Education — one of the groups that participated in the rally — told POLITICO the shift is about who’s funding the campaigns.

“I’m sure that’s the story they’re telling, that they’re super invested in Black and brown communities, but the reality is that they have infinite amounts of money to pour into these elections,” Bautista said. “The candidates are looking for people to bankroll them and it’s very clear that that’s what’s happening, I mean, follow the money.”

She applauded Stringer, Maya Wiley and Dianne Morales, who are running more to the left in the mayor’s race, “for standing up to big money.”

When asked why the rally only targeted Yang and Adams given Garcia’s standing in the polls, Bautista said Garcia’s strong position came about only a few days before their rally.

“We’re gonna be focused on all candidates that are supportive of charter schools and taking this sinister money and calling that out,” she added. (Garcia, so far, has not had a big super PAC supporting her campaign.)

Rafiq Kalam Id-Din II, founder of Ember Charter Schools in Brooklyn — an elementary school that focuses on African American culture and anti-racist practices — said he wants candidates to address the racial equity gap in the charter sector as far as school leaders of color not getting issued charters, noting only McGuire and Adams have addressed it.

He also said the receptiveness stems from recognition of the work schools did during the pandemic, noting how they did “innovative things” and worked hard to “be open and available as much as possible.”

“I think any mayor who’s going to be taking over the city coming out of this pandemic is gonna wanna make sure they have at their disposal every possible tool and resource, especially one that’s as good and as powerful as charter schools,” Kalam Id-Din II said. “I think they’re thinking strategically about that.”