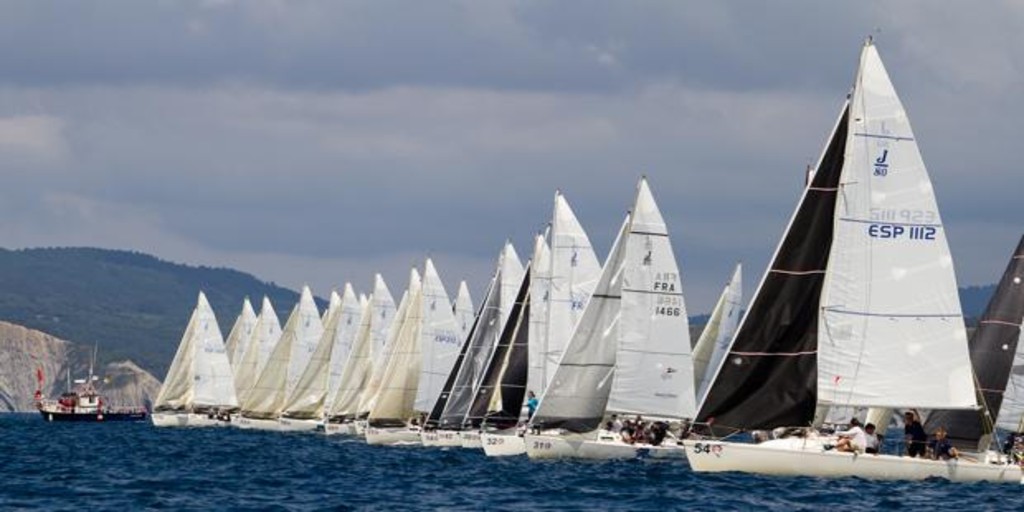 After not being able to be disputed a year ago due to the pandemic, one of the classics returns to the Biscayan waters of the Abra: the XVI SURNE Regatta-56th Eskarra Trophy, which will also be the Basque Country Championship in the J80 class. Since this month of June and until the end of September, most of the most outstanding regattas of the calendar of the Real Club Marítimo del Abra-Real Sporting Club take place, which already organized the ‘II International Women’s Sailing Cup’ a few days ago. One of the most relevant appointments for cruises and boats of the J80 class arrives this weekend of June 5 and 6 and warns that the leading sailing competitions (with the Spain J80 Cup included) are approaching the Abra. It was in 1964 when the first edition of this historic Eskarra Trophy took place, a test with tradition and history of Basque sailing. This Saturday marks the 57th anniversary of that longed-for start (56 editions after being suspended in 2020). There will be about 40 boats of the cruiser classes and J80 monotypes -with a scheduled departure by the race committee at 1:00 pm-, which will sail to pursue the victory in a regatta with a lot of pull among the crews, who consider it as one of the the most special of the wide calendar of the Club de Las Arenas.

For this reason, sailors aspire to inscribe the name of their boat in the trophy that will be raised by the absolute winner of an Eskarra Trophy that emerged in the 60s of the last century by a beautiful initiative of the former president of the Real Club Marítimo del Abra-Real Sporting Club, Don Ramón Zubiria, as a tribute to José Luis Azqueta and his sailboat ‘Eskarra’. Dozens of units from the Cantabrian fleet will be noticed in this XVI SURNE-56th Eskarra Trophy Regatta, consolidated as one of the most anticipated competitions and which changed its name seventeen years ago for sponsorship reasons. In addition, to this classic competition is added the Euskadi Championship of the thriving J80 class. On the list of entries for these monotypes are ‘Biobizz’, ‘Mandovi’, ‘Fhimasa’, ‘Vissi’, ‘Dorsia Covirán Sailing Team’, ‘Decoexsa’, ‘Marina Rubicón’, ‘Dr. Chacartegui ‘,’ Enbata 80 ‘,’ Zeoestrés’, ‘NJ’, ‘Freus’,’ Wilco ‘,’ Hib-Brut ‘,’ Katxoka ‘,’ Etnia Barcelona ‘,’ Jet Set ‘and’ Pilgrim ‘.