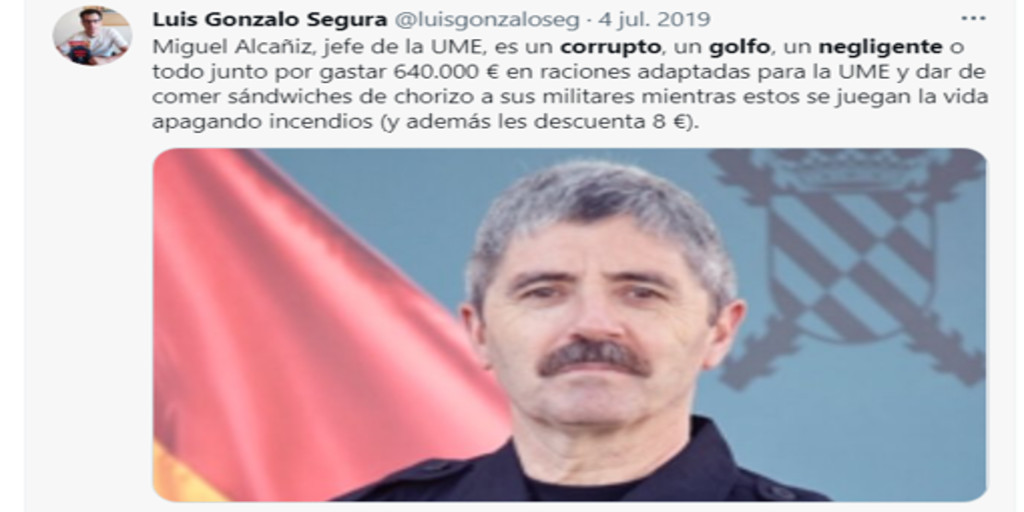 The Provincial Court of Madrid has upheld the appeal of the former Army Lieutenant Luis Gonzalo Segura, who has been acquitted of the crime of serious injuries after calling on Twitter “corrupt, gulf, negligent or all together” the general Miguel Alcaniz, then head of the Military Emergency Unit (UME).

Thus, the Provincial Court revokes another sentence issued on March 12 by the Criminal Court No. 23 of Madrid and which ABC reported.

According to the new sentence: former Lieutenant Segura “echoes a real news story, not invented or openly false. The relevance test is fulfilled, since the exercise of a public responsibility as is the top management of the UME, requires submission to criticism and with a plus with respect to other military or civilian assignments or functions and finally the proportionality test is fulfilled. since the expressions are not openly insulting, although they are partly hurtful, excessive or unfair, but they appear directly linked to the news and therefore to the subject matter of the criticism.

The facts tried were denounced by the Minister of Defense herself, Margaret Robles, on July 4, 2019 after former Lieutenant Gonzalo Segura published a tweet in which he criticized, with the aforementioned insults, the Lieutenant General of the UME for alleged nutritional deficiencies suffered by the military while participating in firefighting tasks forest in June and July 2019.

“That one of the three military meals that are putting out fires is a sandwich of four slices of chorizo ​​is a scoundrel. Miguel Alcañiz Comas, head of the UME, is corrupt, a gulf, a negligent or all together because that food is not received and does not cost € 8 “or” Miguel Ángel, head of the UME, is a corrupt, a gulf , a negligent or all together for spending 640,000 euros on rations adapted for the UME and feeding chorizo ​​sandwiches to his military while they risk their lives putting out fires and also deducts 8 euros “said the published tweets that included a photograph of the lieutenant General of the UME, the shield and the colors of the aforementioned unit. For this reason, the Ministry of Defense denounced it.

Thus, former Lieutenant Segura echoed information that had appeared in digital media with headlines such as: “A child’s sandwich with 5 slices of chorizo: the military’s food in the Tarragona fire.” This information was based on an anonymous report that appeared in the Telegram channel of ‘Citizens in Uniform’.

The Defense Ministry denied that this was the food that had been given to the military who put out the fire. And he provided precise information to the verification portals of EFE or Maldita.es.

Beyond the controversy over the slices of chorizo, the new ruling enshrines the protection of freedom of expression in this specific case and in the context that the tweet against the former head of the UME was published. Nor does the Provincial Court believe that criminal proceedings are adequate as they are not serious injuries.

«Every person who holds a public position of responsibility, whether by political, civil servant, statutory designation, merits or for any reason, it is subject to such scrutiny of public opinion or published opinion “, wields the judgment of the Provincial Court regarding the legal grounds.

For his part, former Lieutenant Gonzalo Segura, who must bear the costs of the appeal, considers that complaints such as this one by the Ministry of Defense in response to tweets such as those published in July 2019 are part of “a state strategy to repress a whistleblower corruption “, as expressed to ABC. Regarding this allegation, which was also made by the former lieutenant, the Provincial Court considers it “superfluous” and did not want to enter into it.