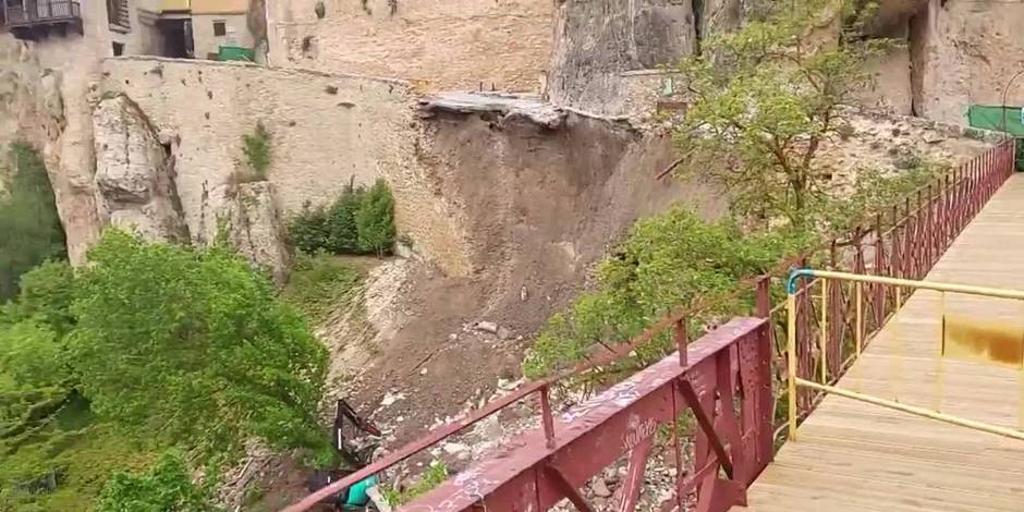 The mayor of Cuenca, Darius Dolz, has announced that the works to clean up and rebuild the wall of Canónigos Street, which collapsed on May 12, will be completed before the end of this year, since the works to return the wall to its original state have been declared of emergency both by the City Consortium and by the City Council.

During the Plenary on the State of the City, which took place this Tuesday, Dolz took time to talk about the works being carried out by the Consortium of the City of Cuenca.

There it has been extended greatly on this street located next to the Hanging Houses of Cuenca, making a chronology of the work that was going to be carried out at first to repair the breakdown of water such as those that are currently being carried out.

Thus, on January 26, the acron company Carry out repair works on the road surface on Canónigos Street in the affected section, the reconsideration of which was signed in April and said collapse occurred on May 12, at 10.20 am.

Then, it was on May 14 when the Consortium declared the sinking a catastrophic accident and it was approved to carry out an emergency procedure to carry out the insurance works in the area, delegating the order of the works to the management.

In this way, after contacting three Cuenca companies, it was finally decided to propose the work to Sarrión Constructions, that on May 15 he agrees to do the work.

Thus, from that May 15, they began to carry out the works to consolidate the wall, stabilize and secure the street and on May 24, the Local Government Board declared urgent the works to rebuild the wall in order to shorten deadlines and that both works could be concatenated.

“In this way, according to what has been discussed with company technicians, the works are being carried out and we mark that all the consolidation and reconstruction works of the street are carried out and completed before the end of this year,” he argued Dolz.

On the other hand, the city councilor from Cuenca has addressed the Debate on the State of the Municipality, highlighting that “it has been a year of intense work and with very positive results”, highlighting as a milestone the election of Cuenca as the permanent headquarters of the National Center for Prison Studies. A space that will be a reference for all prison officials in the country, 24,000 euros at present, “which will generate a permanent flow of people in the city throughout the year.”