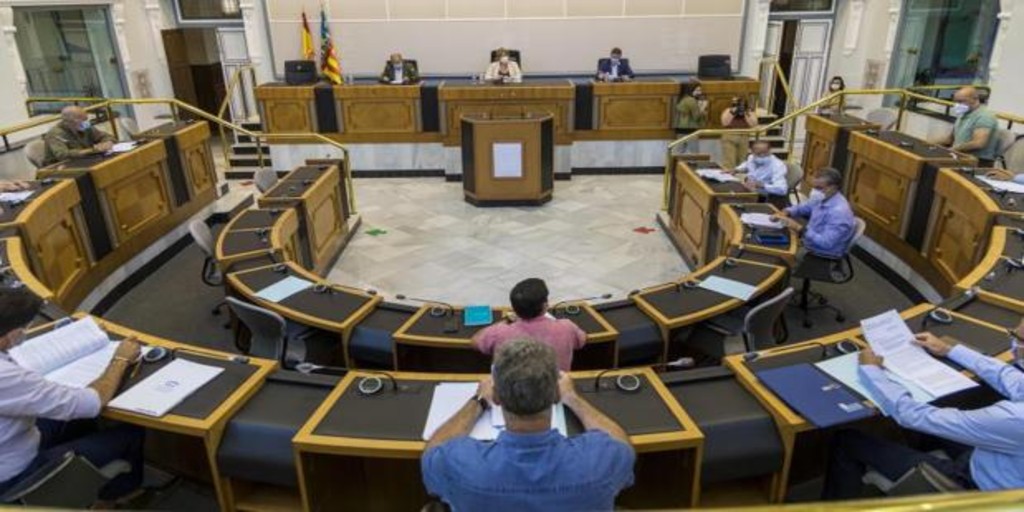 The Diputación de Alicante will allege against the draft of the Tagus Hydrological Plan that will substantially reduce the transfers al Segura -when raising ecological flows in Aranjuez- and the president of the provincial institution, Carlos Mazon, does not rule out the presentation of a contentious-administrative.

The Technical Commission of the Provincial Water Commission has met this Tuesday to address this document that will lead, according to the technicians, a reduction in flows for transfers to Alicante, Murcia and Almería de 146.5 cubic hectometers per year on the horizon of 2027, above the 90 initially calculated by the irrigators of the Scrats unions.

Mazón, who has been accompanied by the second vice president and deputy of Ciclo Hídrico, Ana Serna, has announced the dispute if finally the plan promoted by the central government goes ahead, in addition to “going out to the streets to defend the transfer clearly and forcefully.” The Provincial Council will also urgently convene the Technical Water Commission, which will meet in the next few days.

«In the defense of the transfer, reason assists us and it is not a tantrum, nor a complaint from a territory, nor a measure of lack of solidarity. With the defense of the transfer we are, precisely, fighting climate change and favoring the environment and sustainability “, indicated Mazón, who pointed out that the ecological flows of the Tagus” are compatible “with the ecological flows of the Segura,” which must also have them. ”

“Lies and half truths”

The Alicante leader has also expressed his “fatigue at the lies and half-truths of those who say that the transfer will continue when only drops fall from the tap. We are facing an irreversible process of definitively closing this infrastructure. Every month that passes, with each decision that is made, the tap is increasingly turned off. It is no longer worth them to tell us that the transfer is inalienable», Insisted the president, who has warned that«in 5 or 6 years the transfer will die».

Mazón has appealed to reason, common sense and dialogue and has conveyed a conciliatory message to clarify that these demands do not harm anyone: «to our brothers from Castilla-La Mancha that we are not going against them, but in their favor ». At this point, he has indicated that the investment and exploitation works to be undertaken in the Tagus “would solve many problems and it is something that should not undermine water solidarity.”

Likewise, the president has described as «derision»The response of the Tagus Hydrographic Confederation to the allegations presented by the Alicante Provincial Council to the Outline of Important Issues, a step prior to the preparation of the Draft of the Tagus Hydrological Plan. “Neither the content has been entered, nor have the allegations that have been presented with scientific and technical rigor been properly answered. Automatically it has happened to the next level ”, has lamented Mazón.

In this sense, from the Technical Commission meeting this Tuesday it has also been criticized that in the response to the allegations presented by the provincial institution it is limited to answering, “with practically no motivation”, that the uses of transferred water are uses of the cessionary basins and therefore their valuation does not correspond to the Plan of Basin of the Tagus. At this point, the technicians warn that “the Tagus planner cannot ignore the existence of other legal configuration rights, which are those covered by the law that includes the Tajo-Segura transfer.”

During the session, convened on an extraordinary basis, they have analyzed various reports prepared by experts in legal and water matters that refuse to increase ecological flows based on technical, environmental, social and economic criteria.

The coordinator of the Commission and professor and director of the Water Institute of the University of Alicante, Joaquin Melgarejo, has explained that the allegations that will be presented from the Alicante Provincial Council will question the methodology used to set the environmental flows in which, in his opinion, the reports that have been prepared from different academic and technical institutions have been ignored.

“It is not necessary to increase the ecological flow in the Tagus above 6 cubic meters per second,” said Melgarejo, who also pointed out that this proposed increase “has some social and economic effects of the first magnitude in the receiving basin, because each cubic meter per second that is increased in Aranjuez means 31.5 cubic hectometres less per year that they come to the receiving basin ».

In this sense, he stated that “being very conservative, we are talking about the decrease in flows for the Tajo-Segura transfer will be 146.5 hm3 / year in the time horizon of 2027”, since, in addition to the ecological flows , transfers will be affected by the change of exploitation rules and the disembalses to the La Mancha plain.

The Alicante professor has also explained that the intention of the Ministry of Ecological Transition to supply these flows by desalinated water will raise the price of water, since currently the transfer is paid at 11 cents per cubic meter «while that of the desalination plants is paid to 60 cents per cubic meter, that is, five times more ».

The reduction of the transfer will also have an environmental effect, since the production of desalinated water “requires four times more energy than that consumed by the Tajo-Segura transfer (1kw / h per cubic meter)”. «It is paradoxical that the Ministry of Ecological Transition is dedicated to increasing the supply of water with a higher cost of energy and therefore CO2 emissions», Has lamented.

For her part, the deputy for the Water Cycle and also the mayor of Albatera has shown the “absolute concern” of the municipalities of the Vega Baja and of the farmers and irrigators “who depend on this infrastructure.”

“From the Diputación de Alicante we are going to be by their side in any action that comes in defense of the transfer,” said Serna, who has insisted that “these changes respond to a political decision that was already taken and the only one who could have reversed it is the president Ximo Puig, which has not done so because the interests of his party have prevailed over those of the Valencian Community.