The King, “impressed” by the works of “Lux” 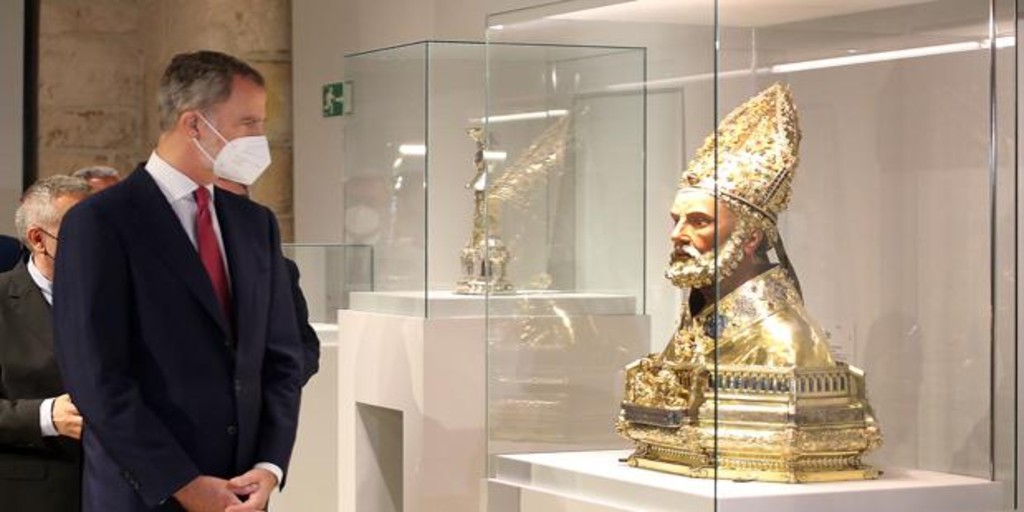 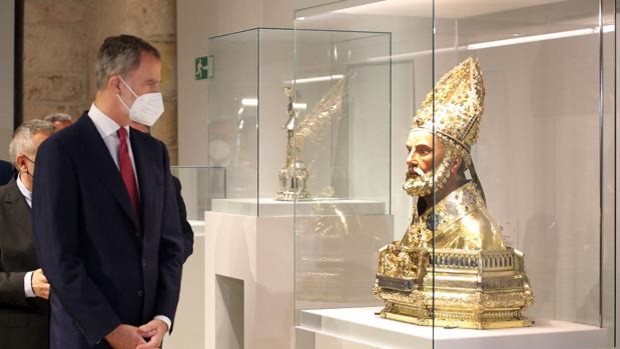 His Majesty King Felipe VI was shown this Tuesday “impressed” by the pieces that are housed in the twenty-fifth edition of Las Adades del Hombre ‘Lux’ in Burgos Cathedral. This has been reflected in the words that the monarch left reflected in the Honor Book of visits to the exhibition after touring it. “Really impressed by the wonder that the new edition of The Ages of Man has gathered here in Burgos to celebrate both the eight centuries of the history of this Cathedral, as well as the new Jacobean Holy Year,” he wrote. Likewise, His Majesty has highlighted that “the XXV exhibition of the Las Adades del Hombre Foundation, under the name of ‘Lux’ brings together treasures from our Cathedrals and Churches and diocesan museums from all over Spain and focuses its attention on the era of cathedrals, in the pilgrims to Compostela and in the special Marian devotion of our country ». «I want to congratulate all those who have worked and supported this spectacular new exhibition of our sacred art and our cultural heritage. I am sure that it will be a success and will highlight its precious pieces, as well as the heritage set. With my admiration and gratitude ”, he concluded with his signature in the Book of Honor. From 11:30 a.m. and for an hour and 45 minutes, Felipe VI has toured the Upper and Lower Cloister of the Cathedral, where a total of 120 pieces of sacred art from forty cathedrals in the country are exhibited that try to explain what a cathedral is, the origin and meaning of these temples, through seven chapters. The monarch was guided during the visit by one of the curators of the same, the professor of Art History of the University of Burgos (UBU), René Jesús Payo, in whose group was also the president of the Board, Alfonso Fernández Mañueco ; the mayor of Burgos, Daniel de la Rosa; the Minister of Culture and Sports, José Manuel Rodríguez Uribes, as well as the bishops of the dioceses of the Community. The King shows the 18th century artillery car that houses ‘Lux’ in Burgos – POOL / ICAL At the end of the visit, René J. Pay has revealed, in statements collected by Ical, that the monarch “has been very interested” and «From the beginning he has been integrated into the message of the exhibition, he has interacted a lot, asked a lot of questions, you can see that he has a very deep knowledge of what Spanish history and heritage is, which was seen above all when we talked about historical dates, monarchies, dynasties … ». “It was a very interesting and interactive visit,” the curator also highlighted. Regarding the pieces that most caught his attention, René J. Payo highlighted the tomb of Don Mauricio, the construction tools of the Cathedral of Toledo and Segovia, the crown of Sancho IV, the Alfonsi tables, the model of the Seville Cathedral, from the 15th century, and the bust of San Valero, among other pieces in which it has stopped. “Unpublished” photos of his great-grandfather Asismimso, has indicated that the Head of State has shown “great interest” in the photos that have been shown to him from the Cathedral of the visit of his great-grandfather, King Alfonso XIII, noting that “some of they did not know them and that they were unpublished for him ». “These photos are in the archives of Burgos, Diario de Burgos, municipal and private archives,” the commissioner told the journalists gathered there.