The six news you should know today, Wednesday, June 30 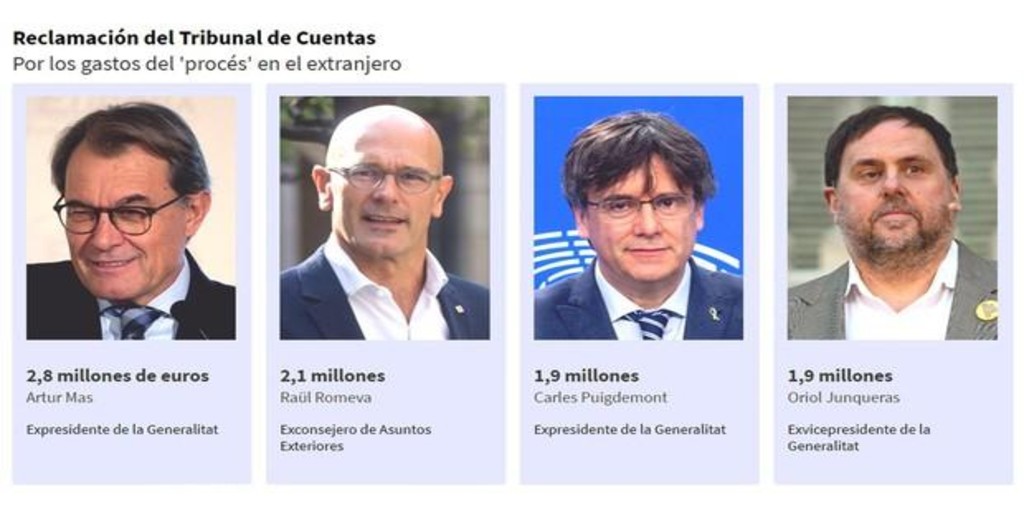 1. Secessionism requires getting rid of the economic cost of the ‘procés’. Today will end the summons from the Court of Accounts to inform the 42 people involved in the spending of the foreign action of the Generalitat of Catalonia between 2011 and 2017 linked to the procés’ independence. The amount is, according to the provisional liquidation act consulted by ABC, of ​​5.4 million euros. After listening to the defenses and the lawyers of the Generalitat, today it will be the turn of the Public Prosecutor’s Office, the State Attorney’s Office and, as a public action, Catalan Lawyers for the Constitution and Catalan Civil Society. In fifteen days the final settlement and the beginning of the process to collect the bonds will be known. The 5.4 million euros are distributed among those involved and the figure is joint and several based on the alleged irregularities and the temporary period of office of each of the quarantine of those involved.

2. The Government appeases the Calvo-Ábalos duo in front of Montero to consummate their most ideological agenda. Nobody imagined that France would be defeated by Switzerland in the European Football Championship. Nor did anyone in the PSOE suspect that they would be the ones who would not pass the round when, just a year ago, senior organic officials released an internal document -with the signature of, among others, the Minister of Transport, José Luis Ábalos, and the Secretary of Equality of the party, Carmen Calvo- to reassure the rest that socialist acquiescence to the ‘Trans law’ as it had been drawn up by the Ministry of Equality would never be possible. The meeting (rather months of collision and blockade included in La Moncloa) between the partners of the Government coalition on account of the draft Law for Real and Effective Equality of Trans People has been won -for the moment- Irene Montero, that has subdued the rivals who did not even want to include the expression ‘gender self-determination’ in the norm, something that finally is in the articles.

3. Spain and the EU gain momentum to overtake the US in group immunity. Spain and the European Union as a whole have taken momentum to meet their vaccination targets against the coronavirus. The current rhythm of the autonomous communities in the administration of doses will allow countries with a stagnant campaign after a brilliant start, such as the United States, to overtake, as long as the challenge of immunizing the young population during vacation periods is successfully overcome. Spain has already covered 35.0% of the population with the complete vaccine, and 51.3% have at least one dose, according to data up to June 27 from ‘Our World in Data’, the statistical project of the Oxford University that allows comparison between countries. The percentage is close to the EU average, with 31.2% with the entire pattern and 49.4% with at least one puncture.

4. José Luis Moreno cheated millions of an Argentine producer. A complaint lodged by several banking entities –ING before the Police, Abanca before the Civil Guard, and later others from Bankinter, Bankia and Liberbank–, in which he realized a loss of almost 1.4 million euros caused by a abuse of banking operations by a business plot, and the arrest of a ‘mule’ (carrier) who was carrying more than one million euros in cash from drug trafficking in the double bottom of the trunk of the car. That was the starting point of the investigation that yesterday culminated in Madrid, Barcelona, ​​Valencia, Alicante and Murcia with the arrest of 53 people who are accused of fraud, document falsification, money laundering and belonging to a criminal organization that would have defrauded more than 50 million euros.

5. A letter warned in April that the deterioration in the Miami building was accelerating. Less than three months before part of the twelve-story Champlain Towers South building collapsed in Surfside, north of Miami Beach (Florida), the community president alerted the rest of the residents that the deterioration of the concrete detected in 2018 was “speeding up.” This was made known to residents by Jean Wodnicki in a letter dated April 9 that he signs as chairman of the board of directors and which was made known yesterday through the US media. In the letter he made reference to the report that three years ago the engineer Frank Morabito had prepared before the mandatory recertification that buildings in Miami must undergo 40 years after their construction (this is from 1981) and that already pointed to structural damage. Despite this document, a municipal engineer that year guaranteed the neighbors that the building was “in very good condition.”

6. Ethiopia stops the civil war to avoid defeat and famine. The Ethiopian government announced on Monday an immediate and unilateral ceasefire in Tigray, the northern region where it launched an offensive on November 4 on the orders of Prime Minister Abiy Ahmed. The decision came after the troops of the Popular Front for the Liberation of Tigray (FPLT), the party-militia facing the government of Addis Ababa, managed to regain control over the provincial capital, Mekele. “The capital of Tigray, Mekele, is under our control,” Getachew Reda, a spokesman for the FPLT, congratulated himself on Monday. On the streets of the city, rebel troops and civilians could be seen celebrating their arrival with glee, Reuters reported. Shortly after, the Ethiopian government reacted to the news by declaring a ceasefire “which will continue until the end of the agricultural season. [en septiembre]».