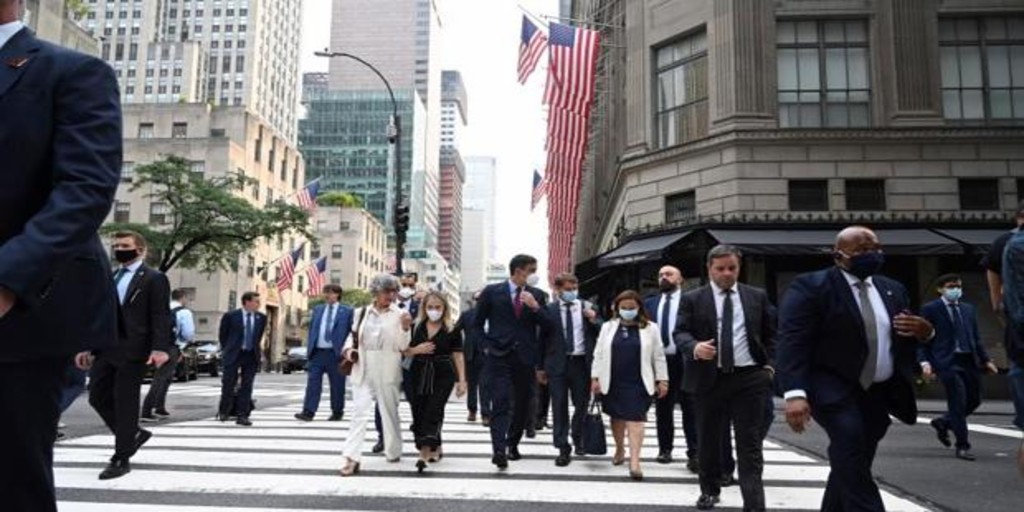 The president of the Spanish government, Pedro Sánchez, yesterday made the unusual decision to comment on US policy at the start of his tour of New York, The Angels Y San Francisco, which takes place this week. Before meeting with businessmen and investors, Sánchez was interviewed on the morning show on the cable television network MSNBC, praising current White House tenant Joe Biden and very harsh in his criticism of his predecessor, Donald Trump.

Moreover, the head of the Spanish government even had no qualms about criticizing a third country, China, with whose president, Xi Jinping, spoke at the end of May, according to La Moncloa, to “bet on multilateralism to face the challenges global ‘.

Of the Chinese regime, Sánchez said in New York that he is a “competitor” and “rival” of Spain. “It is a systemic rival when it comes to democratic values, but it is true that we must speak with them, open a dialogue with them on great challenges, such as the ecological transition,” he said when asked if he agreed with the criticisms. the communist regime of the Biden Administration, which are on the rise.

It was not the only time that Sánchez aligned himself closely with the current White House tenant during the interview conducted by host Mika Brzezinski and agency correspondent Ap Jonathan Lemire.

“I think that when President Biden says that America is back that is good news not only for you, but also for us,” Sanchez said on the ‘Morning Joe’ program. “In Europe we are very committed to the ecological transition and in Spain we will allocate 40% of European funds – 162,000 million dollars for the next six years – to the ecological transition,” added the Prime Minister.

When asked about Biden’s arrival in power, Sánchez reiterated that “this is great news.” And that “it is very important after this pandemic that the transatlantic relationship between the US and the European Union is closer in the future and unfortunately the relationship with the previous Trump Administration was very difficult to understand. To see a US president say that the EU was some kind of enemy against US interests was a mistake. ‘

The programa ‘Morning Joe’, in which Sánchez premiered, is not one of the most watched in American mornings. It does not compete with the magazines of the generalists, such as ‘Good Morning America’ on ABC or ‘Today’ on NBC, which have informative sections. ‘Morning Joe’ is more of a niche program, within a news network, which ranks second in audiences after Fox News. Sánchez also plans to give an interview to CNN en Español, but not his older sister, in English.

It is uncommon for a visiting president to the United States to interfere in political matters of this magnitude, especially when Trump is still studying running in the primaries for the presidential elections of 2024. It is true that Trump’s relationships with Sánchez were icy, so to speak, and that the former’s criticism of Spain for various issues, from investment in defense to trade balance, were common currency during his tenure.

It is not that things have changed too much with the relief in the White House. For now, in six months of a new mandate in Washington, Biden and Sánchez have seen each other briefly at a NATO summit in Brussels, but there has not been a calm conversation between the two leaders, either by phone or in person, something that is strange given that both countries have a defense cooperation agreement.

The Spanish government does not take for granted, and says that the relationship is normal and that Biden is focused on the pandemic and that he has little time. The heads of government or state of Germany, Israel, Afghanistan and Jordan, among others.

In New York, Sánchez was seen with the former mayor of the city, Michael Bloomberg, but not with the current, Bill de Blasio, who is out. He also spoke with the CEO of the investment management company BlackRock, Larry Fink, and inaugurated the Economic and Commercial Office of Spain in New York in the iconic Chrysler Building.

Later, the Prime Minister will travel to California, where he will hold more meetings in Los Angeles and San Francisco.