Messi, burqas and Qatari money on the cover of ‘Charlie Hebdo’ 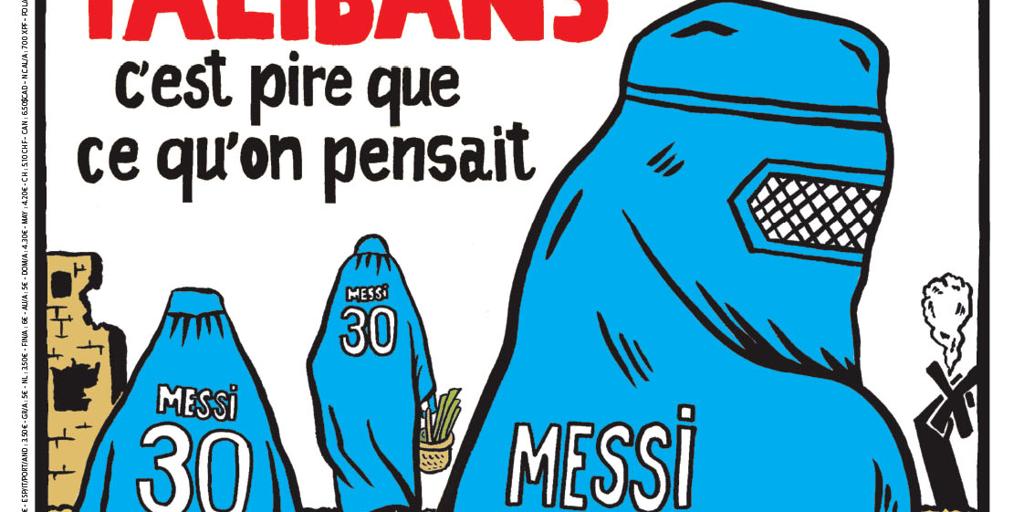 The last cover page from the satirical weekly ‘

Charlie Hebdo‘by Biche, one of the cartoonists / humorists of his penultimate generation, raises with luminous clarity the most flammable of the most dramatic current problems: the financing of international Islamist fundamentalism.

Taliban. It was worse than it was thought “, says the text that illustrates a cover with the image of three men? Women? Dresses with burka, blue, with this message on the back: «Messi 30».

30 is the number Messi wears as a player of the PSG, great club financed by Qatar… The emirate accused for years of directly or indirectly financing small groups and terrorist activities.

Taliban: it’s worse than we thought!

👉 Investigation of nuclear tests in Polynesia and the contamination of almost the entire population
👉 What if it’s the end of speed?
👉 Summer series: meet Maurice and Patapon!

Amnesty International and other non-governmental organizations have on many occasions denounced the lack of basic freedoms in the emirate of Qatar, where Islamic religious rigorism imposes legislation that violates basic freedoms of men, women, children, the elderly, treating with sadistic cruelty to many immigrants.

France, Spain, big soccer teams (Barcelona, PSG), have been behaving in a “sympathetic” manner for many years with the religious fundamentalism of Qatar, a billionaire investor.

After Messi’s installation in Paris, the French press recalled with some modesty that the Argentine player had been confirmed as an excellent “diplomatic weapon” for a confessionally Islamic state, “very strict.” The reinstatement of an Islamic emirate in Kabul has been perceived on the world stage as a new triumph for Islamic terrorism. Qatar, Saudi Arabia, the vast majority of Muslim states, have officially “distanced themselves” from Taliban power. The cover of ‘Charlie Hebdo’ has the virtue of recalling, with ironic cleanliness, passably cruel, the always atrocious reality of diplomatic hypocrisy.

Officially, the PSG has preferred to keep a deathly silence. But nobody is fooled on social networks, where comments of this type have multiplied: “Deep down, nobody cares about the behavior of a billionaire like Messi. It is about something deeper. ‘Charlie Hebdo’ reminds us that those who buy his shirt are giving money to Qatar, a state that also has worse than wrong relations with the financing of radical Islamist groups, who do not always understand each other: they are all equally sinister.