The repatriations of minors were managed by email: “Proceed today” 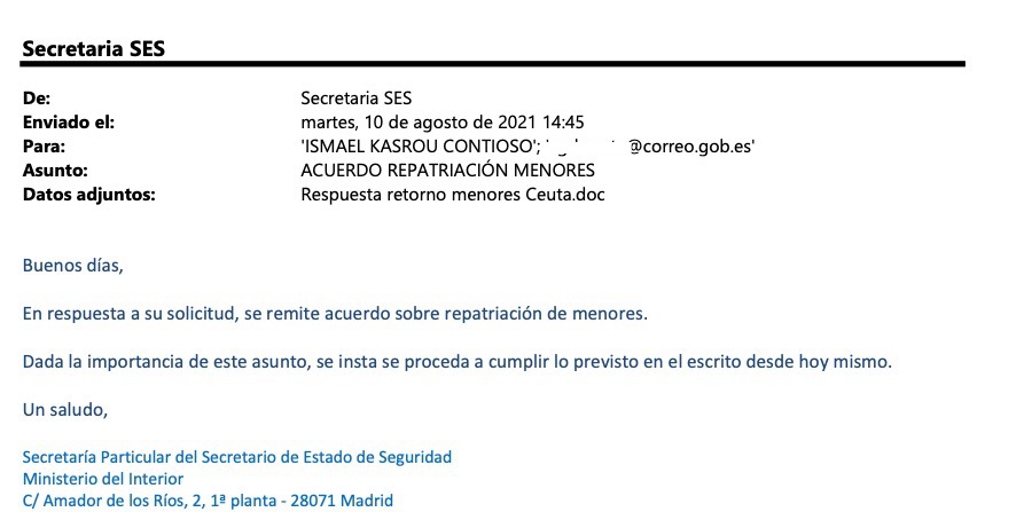 A letter and an email. These are the only administrative acts that appear as triggers of the process of repatriation to Morocco of minors sheltered in Ceuta, according to the file with which the National Court works. «It is urged proceed to comply with the provisions of the letter from today»Says the email.

The content of the letter is already known. It is a letter from the Secretary of State for Security in which neither the signature nor the addressee appears and in which Interior “begs” Ceuta to begin repatriations, the same that the autonomous city had requested under the agreement with Morocco for the family reunification of single minors.

The Prosecutor’s Office has been making the whole process look like only justification and the National High Court criticizes its deficiencies, such as the absence of signature or addressee, although it has practical effects as if it were an instruction because it triggers repatriations.

The email, to which ABC had access, was, however, unknown until now, but it is already in the Contentious Chamber of the National Court and the letter was attached. There is the recipient, Kasrou Contioso, Secretary of the Government Delegation in Ceuta. It also includes a definition of the aforementioned letter it contains, which it refers to as an “agreement.”

“Good Morning. In response to your request, agreement on repatriation of minors is submitted. Given the importance of this matter, it is urged that we proceed to comply with the provisions of the letter today, “says the email. It is dated August 10, the same as the attached letter that gives free rein to repatriations.

This is the entire administrative file of the repatriations of minors that consists of the Interior, which ensures that he has not given any order or instruction, limiting himself to begging Ceuta to proceed to execute an agreement with Morocco that the autonomous city had previously requested to implement.

For the Contentious Chamber of the National Court, the letter with that “plea” Yes, it is an administrative act comparable to an “instruction” because it had an effect in triggering repatriations. The question is whether or not that letter-order is sufficient to agree on a measure that affects the fundamental rights of a group especially protected by the legal system, minors. And if the process deployed to develop the provisions of the letter is in accordance with the law or not.

That is what the National Court will decide when it enters to thoroughly analyze the appeal raised by the Immigration and Refugee Aid Network, which had asked for the urgent precautionary suspension of all repatriations but whose claim, in this sense, has not prospered: The Chamber appreciates that there are urgent reasons to pronounce and in fact says to do it it is your competence, but the only element of analysis that you have on the table is the well-deserved letter and the text, such as the email, does not in itself show any violation of rights of minors. However, he will go on to analyze how the whole process has been articulated.