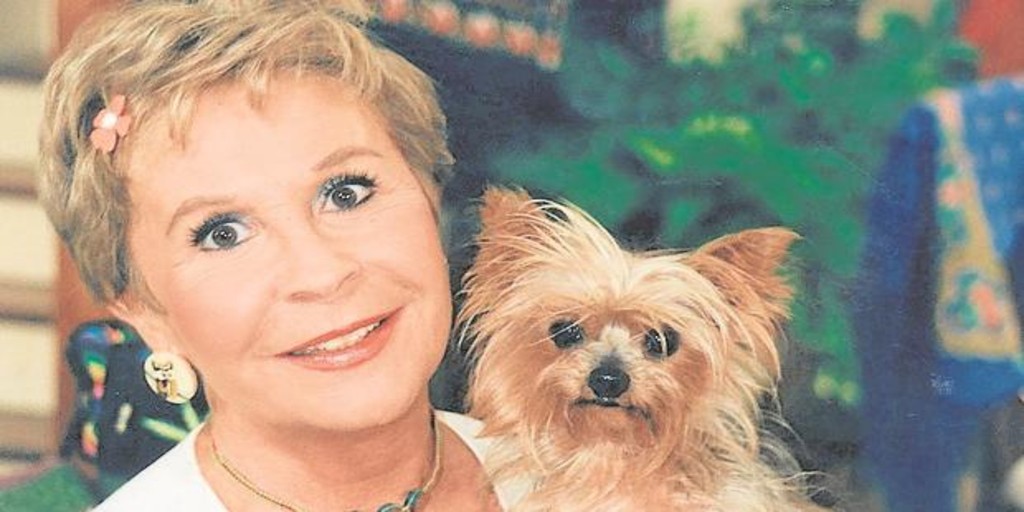 Lina Morgan He lowered the curtain on his life six years ago. His death aroused great interest since it was the end of one of the most important comics in our country. A woman who laughed out loud on stage but hid an indomitable personality and unbridled ambition. The same as although allowed him to amass an untold fortune, made him lose practically all affections. Except for Raúl Sender, who has voluntarily withdrawn from the madding crowd, there are very few who remember her fondly: «The only thing Lina had was money. She was arrogant and conceited, she knew how to do her role very well, “says actress Ana Valdi when asked.

Lina was one of the highest paid actresses on the small screen. ABC has been able to confirm that for each participation in the unforgettable ‘Hostal Royal Manzanares’, he billed 180,000 euros. It did so continuously during the sixty-four chapters that Televisión Española distributed in four successful seasons. Having Lina in the cast of any television or film production was synonymous with large audiences, so her astronomical claims were respected. She was only forced to lower her cache by half when José Frade hired her to star in ‘Gloria Dance Academy’ with a remuneration close to 90,000 euros per episode.

Despite its financial power, his last years were not so buoyant. Lina found herself immense in a cascade of problems and defaults that forced her to dispose of a large part of the jewelry she stored in a safe where she also kept dollars and other currency. Consulted sources assure that in 2006, Lina had 3 million euros in her checking accounts. The lack of projects and the crisis that affected the culture sector forced him to sell the theater in La Latina for 7 million euros, 3 less than the amount that years before the owner of Televisa had offered him: theater, everything changed. Lina began to have serious problems because there was no one who knew or could manage all this.

The José Luis Moreno’s arrival was the main cause of the disaster, but also the intervention of Daniel Pontes that, at that time, he was his personal driver, who did not bring anything good “, confesses Ángel Gutiérrez, former administrator of the comedian, in conversation with ABC.

Ángel refers to Pontes as one of those who helped demonize Lina’s image. During the months prior to her death, it was he who managed her affairs and who allowed or ruled out meetings: “He had her half kidnapped. A pity that a woman like her, so important, ended her last days like that. Besides the disease, the worst thing was how those who tricked her treated her »he says forcefully. Pontes leads a life away from controversy and the press.

Universal heir to the fortune he still calls “my boss”, responds angrily to the call of this newspaper but declines to make statements or defend himself against the accusations against him: “There has come a time when I live life differently from that of my boss, that this man says what he wants, I don’t want to know anything about anyone ».

Daniel doesn’t want to talk about the actress’s great-nieces either, the great forgotten ones that he always rejected. Estefanía and Olga keep asking for help. «They have suffered a lot. Their addiction to cocaine caused them to prostitute themselves as minors. They lived in an environment of marginality and that caused them to neglect themselves physically and psychically. They have had unwanted pregnancies, which they have carried to the end, and the administration has had to intervene and withdraw custody of their children on several occasions.

A couple of years ago, Estefanía, who seemed fully recovered, relapsed and social services intervened. From then on, an unstoppable downhill began: he returned to the streets, to drink … he could not overcome the pothole and lost the child, “explains journalist Joana Morillas, whom the nieces clung to to survive. A version confirmed by Lina’s former administrator who also warns that «I was forbidden to let them pass when they came to the theater. He said that they wanted to take advantage of his name and that they did not give him any pity. I lived through very unpleasant scenes, ”he remembers. Not all were shadows. The passage of time has served to brighten the lights that have turned our protagonist into a myth. The journalist Jesús Manuel Ruiz gives a good account of this, who, for several weeks, has been the protagonist of the play ‘Thank you for coming’ that is staged at the Arlequín Theater in Madrid.