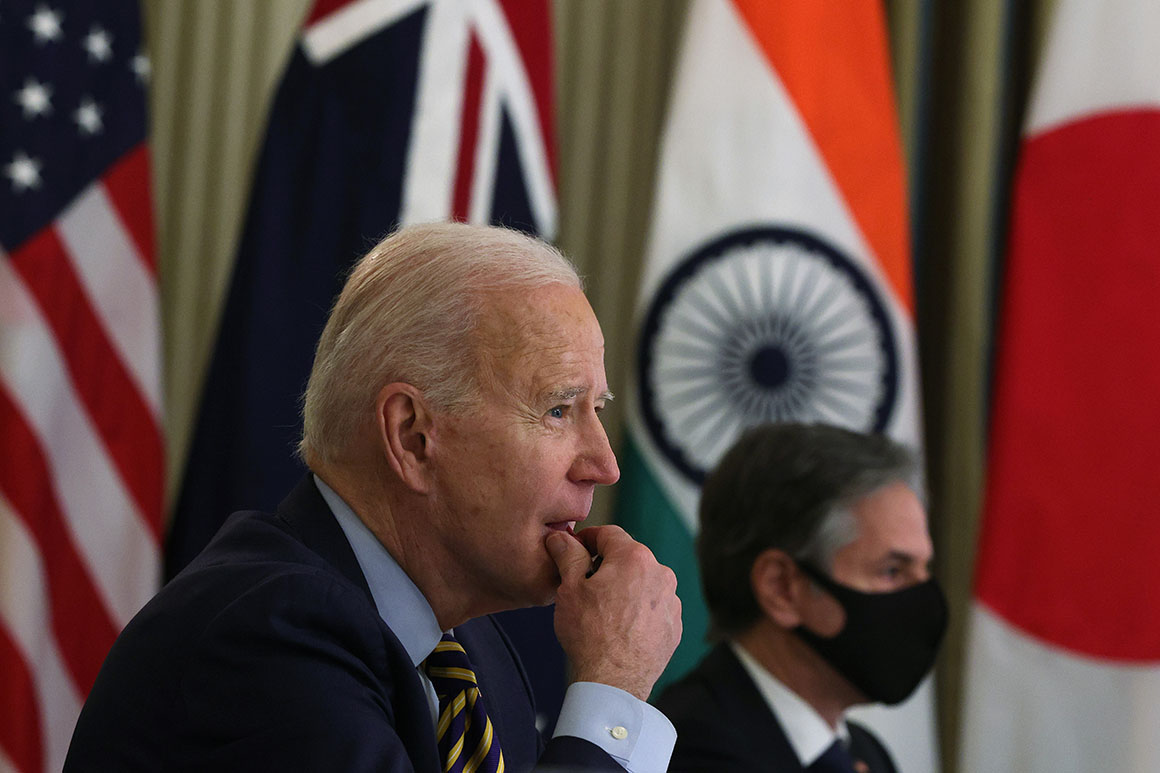 To date, the only countries sanctioned under the law are Turkey and China, both for buying the same S-400 system slated to arrive in India. It’s a precedent that could put the Biden administration in an awkward position with a key ally.

The government of Narendra Modi appears to have made the decision to go forward with the system, and “they’ve not backed down for the last three years despite the threats of sanctions,” said Sameer Lalwani, director of the Stimson Center’s South Asia Program.

“They planned around it, they made this commitment and reaffirmed it. They’re not blinking on this and so we can play this game of chicken as much as we want, but the consequences will be worse for us,” he said.

Modi was in Washington last week to meet with Biden and the other leaders of the The Quad — India, Australia, Japan and the U.S. — to discuss a range of regional issues, but American and Indian officials would not confirm the S-400 was on the agenda.

India has for decades been a customer of weapons made in the U.S., Russia, France and Israel. But in recent years successive administrations in Washington have tried to wean India off Russian gear, with important wins. But Russia maintains a grip on some major systems, selling nuclear-powered submarines and warships to the Indian armed forces.

In 2020, the Trump administration kicked Turkey out of the F-35 program and imposed sanctions under CAATSA after Turkey received its first S-400, a major step against a longtime NATO ally.

Being removed from the F-35 club was a bitter pill for the Turkish government, but Washington and its NATO allies had spent years publicly and privately warning Turkish President Recep Tayyip Erdogan against consummating the deal. Turkish leadership remained defiant throughout, however. Just this past week, Erdogan said he was prepared to buy a second S-400, pledging “nobody will be able to interfere in terms of what kind of defense systems we acquire, from which country, at what level.”

The Indian government “was definitely watching all of that in great detail and all along the way we continued to warn them,” said R. Clarke Cooper, assistant secretary of state for political-military affairs under the Trump administration, now at the Atlantic Council. The message to the Indian government after inking the deal with Russia in 2018 was “‘look, you take delivery of the S-400 you’re going to potentially jeopardize interoperability with the United States, and you’re going to potentially jeopardize interoperability with other partners that you value,” Cooper said.

The 2017 CAATSA law came in response to Russia’s annexation of Crimea, and was aimed at dissuading countries from buying Russian equipment while also punishing the country’s arms industry. Given the size of Russia’s arms exports to the Asia-Pacific region, however, the Trump and Biden administrations worked to balance the law against antagonizing burgeoning allies with a long history of buying Russian gear.

India is a key part of that balancing act, and how the U.S. treats India’s dealings with Russia will have an impact on how other nations will expect to be treated.

The Indian Embassy in Washington did not respond to a request to comment on the potential for sanctions.

Since CAATSA went into effect, the message to countries with long-standing relationships with the Russian defense industry has generally been, “keep your AK-47s, but if you really are looking to have a modern military alongside the United States and partners, don’t put that at risk,” Cooper said. “I would be surprised if the Biden team is having any different kind of conversation with the Indian government.”

A senior administration official, who was not authorized to discuss the issue and asked for anonymity, said India’s planned defense purchases from Russia are no secret, but “we urge all of our allies and partners to forgo transactions with Russia that risk triggering sanctions,” under CAATSA.

Secretary of State Antony Blinken has not made any determination about sanctions, and “CAATSA does not have any blanket or country-specific waiver provision,” the official said. Any transaction with Russia’s “defense or intelligence sectors must be evaluated on a case-by-case basis.”

In Turkey’s case, the worry inside NATO was that the powerful Russian radar system that tracks targets for the S-400 would pump valuable information back to Moscow about how the F-35 and other aircraft operate. Leaders in Brussels said there was no chance they would put their F-35s anywhere near that radar system, even if it were operated by an ally.

India remains a massive market for arms exporting countries, accounting for 9.5 percent of all global arms imports in 2020 bested only by Saudi Arabia, according to the Stockholm International Peace Research Institute.

And billions of that spending will continue to go to Russia.

In 2023, India will receive the first two of four new frigates from Russia, and in 2025, will begin leasing its third nuclear-powered submarine from Moscow, all major deals already sealed.

“The question will be whether this is going to trigger a wave of sanctions each time,” Lalwani said. “So the other reason the administration will have to work this out with Congress is so this Sword of Damocles isn’t hanging over the relationship for the next five to 10 years because those deals have already been made and signed.”

In March, Senate Foreign Relations Chair Sen. Bob Menendez (D-NJ) sent a letter to Defense Secretary Lloyd Austin warning, “if India chooses to go forward with its purchase of the S-400, that act will clearly constitute a significant, and sanctionable, transaction with the Russian defense sector … it will also limit India’s ability to work with the U.S. on development and procurement of sensitive military technology.”

While those major deals will force Washington to reckon with its own policy choices, the industrial competition between the American and Russian defense industries will remain fierce.

In May, the State Department approved the sale of six P-8 submarine-hunting aircraft to India, adding to the 12 Boeing-made aircraft the country already operates. The deals all carry the provision that 30 percent of the manufacturing take place in India, part of Modi’s Make in India program.

A major prize awaits in the coming months, when India decides who will build its new fleet of up to 110 multirole fighter planes. Lockheed Martin is working to sell India on its F-21 fighter, a derivative of the F-16.

Boeing is offering its F-15EX Eagle II and F/A-18E/F Super Hornet, which is competing with Saab’s Gripen E/F, Dassault’s Rafale, and Eurofighter’s Typhoon, which is produced by a consortium of Airbus, BAE Systems and Leonardo. Russia is thought to be offering both its MiG-35 and Sukhoi Su-35.

The Obama administration’s designation of India as a major defense partner in 2016 was meant as a sign of Washington’s desire to draw closer to New Delhi, while nudging the Indian government to begin shunning some Russian gear.

The deal grants India access to U.S. defense technologies at a level comparable to NATO allies, and came just after Russia lost a $3 billion deal to Boeing to build Apache and Chinook helicopters.

The United States and its influential defense industry are not about to walk away from these deals and a growing relationship with India at a time when the country has become a close ally in deterring China. But with India not about to walk away from its relationship with Russia, Congress and the White House will soon have to decide how much they’re willing to accept.

Trump concedes defeat in the dispute over the release of documents