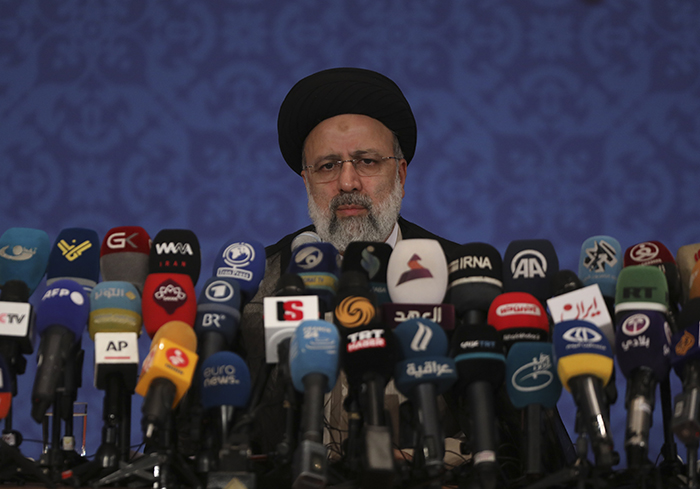 Press play to listen to this article

A new hard-line regime in Tehran has insisted it wants to return to the negotiating table and revive talks over a deal to curb its nuclear program in exchange for sanctions relief. But its actions are telling a slightly different story.

In recent days, Iranian officials have held dozens of meetings with foreign officials to discuss the nuclear talks — but revealed few details about when they will return and what they want. And the regime continues to play a game of brinkmanship with the U.N.’s nuclear watchdog agency, striking deals to avoid censures, only to block access for inspectors days later.

The push-pull tactics have fueled worries in diplomatic circles that a return to the landmark 2015 nuclear deal with Iran is becoming increasingly difficult.

The agreement was put on life support in 2018 when then-U.S. President Donald Trump exited the deal, only to receive new life when President Joe Biden took over. Since then, world powers have gone through six rounds of indirect talks between the U.S. and Iran in Vienna, hoping to find an accord. Yet the talks have been suspended since June, when negotiators broke up, pending the Iranian elections.

While the world waits, Iran is building out its nuclear capacity, with experts warning that the country’s “breakout time” — the amount of time it would need to produce enough weapons-grade uranium for a bomb — is getting shorter.

“Iran is certainly playing for time and will in the meantime continue to enhance its nuclear program to gain political leverage,” said one senior diplomat, speaking on the condition of anonymity to discuss the sensitive situation. “Iran most probably will only come back to the table in Vienna if the west makes a gesture of goodwill or provides certain concessions to Iran.”

Iran may consider the U.S. “weak” at the moment, the diplomat added, given its recent series of diplomatic squabbles, from the chaotic Afghanistan withdrawal to a fallout with France over a canceled submarine contract. This perception could encourage Iran to harden its negotiating position, the senior diplomat said.

Tehran’s mixed signals have extended the expected timeline for any renewed agreement. In a recent analysis, Henry Rome from the Eurasia Group assessed that the revival of the Iran nuclear agreement was “unlikely this year, given mounting uncertainty about Tehran’s interest and the shrinking timetable.”

During a flurry of around 50 bilateral meetings held during the week-long gathering, Iran’s new foreign minister, Hossein Amirabdollahian, conveyed no concrete information on the timing of the talks to political leaders from around the world, according to three diplomats who are familiar with the matter.

Still, Western allies used these meetings to urge Amirabdollahian to return to the negotiating table. It was a common theme in Amirabdollahian’s meetings with foreign ministers from Germany, France and the United Kingdom, as well as with the EU’s foreign policy chief, Josep Borrell.

According to a press release issued after Borrell’s meeting with Amirabdollahian in New York, the Iranian foreign minister “assured of the willingness to resume negotiations at an early date.”

Iran also sat out a meeting during the U.N. General Assembly of the so-called Joint Commission, which consists of the remaining members of the 2015 deal — Iran, the United Kingdom, China, France, Germany and Russia — and is chaired by the European Union. The gathering was meant to help unblock the current stalemate.

Meanwhile, back in Iran, Tehran decided to block U.N. inspectors from visiting the Karaj complex outside Tehran. The key facility is used to assemble centrifuges, machines that enrich uranium.

The inspectors wanted access to Karaj to replace broken and damaged cameras that record the facility’s activities, part of a deal Tehran struck with the nuclear watchdog, the International Atomic Energy Agency (IAEA), on September 12. The pact helped Iran avert IAEA censure, a step that might have derailed the nuclear talks completely.

But now Iran seemed to be backtracking on parts of its pledge, only weeks after signing it.

According to a confidential report given to IAEA members on Sunday, and seen by POLITICO, IAEA Director General Raphael Grossi sent Iran four letters begging for access to the site — to no avail. Grossi’s report also said that Iran’s refusal to let U.N. inspectors access the Karaj site violated the recent deal, even if Iran did allow IAEA inspectors access to all other nuclear sites.

Kazem Gharibabadi, Iran’s ambassador to the U.N., rebuffed this interpretation on Twitter, saying the Karaj complex “is still under security and judicial investigations,” and therefore the cameras and equipment “are not included for servicing.” The Karaj facility was the target of an alleged drone attack in June that Iran blamed on Israel.

Grossi is expected to travel to Tehran to meet with the new leadership “in the near future,” according to the September 12 deal. This could also be an opportunity to discuss the disputes over access.

Iran’s recent tactics are part of an expected hardening in strategy after the country’s recent elections, which brought the more conservative cleric Ebrahim Raisi to power as president.

Raisi has brought in officials more skeptical of the nuclear agreement, including Ali Bagheri Kani, a hard-line senior diplomat who was part of Iran’s original negotiating team for the 2015 deal, and who is now deputy foreign minister.

Similarly, a second senior diplomat told POLITICO that “many signs do point in the direction that Ali Bagheri Kani will also become the new nuclear chief negotiator” — a complicating factor as Bagheri Kani is a staunch critic if not opponent of the 2015 nuclear deal.

The second diplomat has also noticed a potential change in Iran’s approach.

Previously, Iran expressed openness to a plan that would see both it and the U.S. take carefully sequenced steps to return to the 2015 agreement. Now, the diplomat said, “it seems that Iran wants the U.S. to first fulfil all its duties,” meaning a full rollback of sanctions before Tehran scales back its nuclear ambitions.

The diplomat called the change “a significant deviation.”

Recent remarks from Iranian leaders do convey a more uncompromising approach, suggesting Iran may demand more sanctions relief than what was originally granted under the original 2015 deal.

In his address to the U.N. General Assembly, Raisi lambasted America’s “hegemonic system” and demanded the “lifting of all oppressive sanctions” by the U.S.

Time is running out

According to Eric Brewer, a nuclear proliferation expert at the Center for Strategic and International Studies, the country may have enough weapons-grade uranium for a nuclear bomb in “a few months.”

However, he added that Iran would subsequently “still need to convert that material into the nuclear core, and package that with explosives and other components to make a nuclear device, all of which would take longer.”

Iran, for its part, continues to insist that its nuclear program is peaceful.

What causes more concern among experts is the scientific know-how Iran has gained over the past few years while expanding its nuclear program, such as how to operate advanced centrifuges or how to produce uranium metal. This knowledge cannot be undone and could help Iran build an atomic bomb faster in the future.

The U.S. has therefore warned Iran on multiple occasions that its patience is not limitless. Speaking to reporters after the U.N. General Assembly, U.S. Secretary of State Antony Blinken stressed that the window for “getting back to mutual compliance is not indefinite.”

U.S. diplomats stress in private briefings that there is no particular ultimatum or red line. But there may come a moment when American negotiators feel that the benefits of a hypothetical Iran nuclear deal cannot be regained and trust is lost, they say.

Despite the many uncertainties, there are strong incentives for Iran to eventually return to negotiations in Vienna.

Iran’s shaky economy needs sanctions relief and the possibility of exporting more oil and regaining access to frozen foreign reserves could net the country roughly $100 billion, according to estimates from the Eurasia Group.

“I still think that Iran will eventually agree to return to the table in Vienna, maybe already in October, but I expect talks to be difficult,” the second senior diplomat said.