Rubio, guardian of the Spanish brand 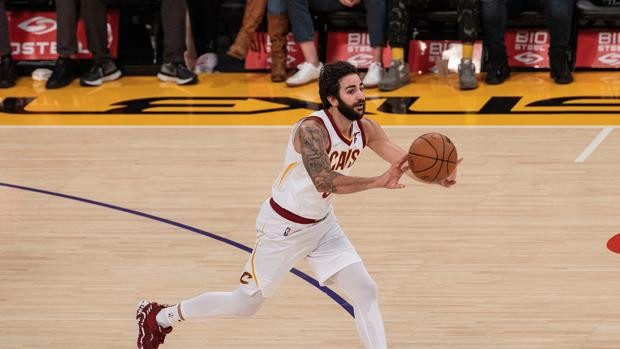 Ricky Rubio can be considered a pilgrim of the NBA. The point guard began his promising career in the league in 2011 at the hands of the Minnesota Timberwolves, beardless and with a bright future ahead of him, and has ended up being a nomad, with five teams in the last five seasons, somewhat exhausted in the spirit, but always wielding a solid game. Last summer, Rubio ended up with the Cleveland Cavaliers, a team that presented itself as the last nail in the coffin of his career in the United States. Surrounded by young players, in an unattractive city and with little chance of success, everything seemed headed for him to spend his last year of contract (close to 15 million euros) and look to Europe to finish off a brilliant resume. However, after seven days into the new season, Ricky is playing at a fantastic level. He has become the leader of a promising pack, he is pulling like never before and he has even cut his trademark bun. The point guard, the last man standing of the golden generation of Spanish basketball in the United States, smiles again. “He’s one of the best point guards in the league. He has a masterful intelligence and a contagious personality. Wherever he goes, the people around him play better ”, declared his coach, the American JB Bickerstaff this week. The Cavs, hand in hand with the point guard, won three of the first five games, being one of the surprises at the start of the NBA. With 14 points and almost seven assists on average per game, the Catalan pulls the strings and reconnects with his game in Ohio, as the point guard, last season, signed the worst numbers of his career. It is true that the Cavaliers have lost the last two games, against the Lakers and the Suns, two of the candidates for the ring, but they have given their face and joy to the fans. The compliments, in short, rain in the direction of Ricky, who once again feels important in a league that seemed to have forgotten him. In fact, their performances open a new panorama. As a free agent next summer, he could sign for an aspiring championship team, a possibility ruled out of late because Rubio has always found good contracts, but on teams outside the competition monarchy. Without going any further, his last name rang for the Lakers, although they finally opted for the talented and chaotic Westbrook. Blackbirds and not legends The summer of 2021 will be remembered under the prism of Spanish basketball as a turning point. The big names, like the Gasols, have stepped aside to make room for the new sage. Although the national players continue to have a great poster in the NBA, the Spanish is now represented by blackbirds and not by legends. If Ricky shines, the generational replacement, that group formed by the Hernangómez, Santi Aldama and Usman Garuba, seems to be having certain problems to acquire prominence in their respective teams. Juancho, transferred last summer to the Boston Celtis, has only played two games in which he has added the figure of eight minutes on the floor. His brother, Willy, hasn’t even made his debut this season with the New Orleans Pelicans. The debutants, Aldama and Garuba, have not had much impact either. The canary has only jumped onto the track twice, with an average of five minutes short, most of them in matches in which the options of victory or defeat were already assured. Garuba, in the Rockets, more of the same. Ricky Rubio, waiting for talent to flourish, is for the first time, and deservedly, the great banner

What is recorded – hospitals must report data on corona patients