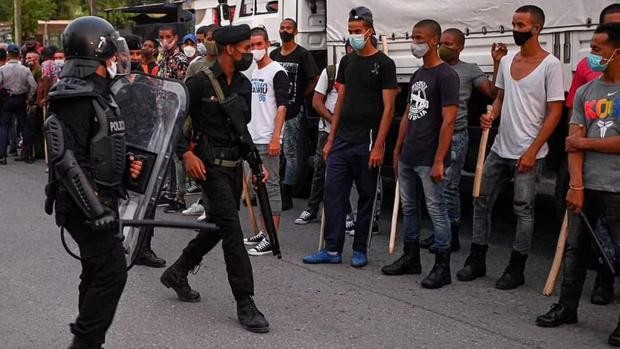 When there are two weeks left for the celebration of the Civic March for Change, convened for November 15 in several cities of Cuba by the Archipelago group – and supported by other platforms such as 27-N and the San Isidro Movement (MSI) – , the concern about the repression that the Government of Miguel Díaz-Canel may exert on the Cubans who take to the streets that day increases. Especially after the thousands of arrests following the July 11 demonstrations (some Cubans face prison terms of up to 25 years); and in view of their response to the announcement of these new peaceful mobilizations, whose organizers, Yunior García (also a member of 27-N) and Fernando Almeyda, have been questioned in recent days. Both have been alerted from the Public Prosecutor’s Office of the legal consequences that those who participate in these demonstrations will face, which have been described as “illegal” by the government – and by Díaz-Canel as “provocation”, which tried to intimidate them with the militarization of the island during the date of its initial convocation, on November 20. Something that did not happen, because the organizers decided to advance them to November 15. Some of the people who have shown their support for this call have already suffered repression by being expelled from their jobs, such as university professor David Martínez. Given this, and after the repression suffered by thousands of Cubans who spontaneously took to the streets of Cuba on July 11, in historical mobilizations, not seen on the island in recent decades, many have shown his concern about what may happen next 15-N. Giving international visibility to the march The same members of the Archipelago group have strongly requested that the march be given international visibility so that this can protect them, according to statements made to ABC by both Yunior García and other members who they prefer to remain anonymous. This concern has been joined by several MEPs who have decided to send a letter – to which ABC has had access – to the EU High Representative for Foreign Policy and Security, Josep Borrell, in which they ask him “to guarantee the presence of representatives of the EU delegation as observers during this demonstration in the most important provincial capitals such as Havana, Santiago de Cuba and Villa Clara. We believe that it is necessary to observe what is going to happen, given the risk of escalation of violence, “says the letter signed by MEPs Tilly Metz, member of Los Verdes; Javier Nart, from the Renew Europe group and vice president of the Delegation for Relations with the countries of Central America, and Jens Gieseke, from the European People’s Party. “We believe that it is necessary to observe what is going to happen, given the risk of escalation of violence,” says the letter sent by MEPs from various political groups to Josep Borrell. In it, they remind Borrell that support for civil society is one of the points that conditioned the support that the European Parliament gave to the EU-Cuba Political Dialogue and Cooperation Agreement in its resolution of July 5, 2017. In paragraph 7 of this resolution, MEPs “ask the Union to support the Parliament’s vision on democracy, universal human rights and fundamental freedoms, such as freedom of expression, assembly and political association, freedom of information in all its forms, and its “global policy of support for human rights defenders. human rights defenders “throughout this dialogue,” says the text, dated October 20.

Given the threats of the Cuban regime, our Group @RenewEurope has sent a letter to @JosepBorrellF asking that observers be present for the marches on November 15. Europe has to be with the Cubans. https://t.co/24XS8DX6fP

The EP Vice-President for Latin American Affairs and Renew Europe MEP, Dita Charanzová, has also shown her concern about what may happen on November 15. «The Cuban people want a change and they have every right to ask for it in a peaceful way. Human rights and the inclusion of civil society are at the core of the EU-Cuba Agreement. It is our duty to ensure that they are respected, on November 15 and always, “he said in a statement from Renew Europe on Thursday. A day later, on his Twitter account, Charanzová stressed that at a time like 15-N “Europe has to be with the Cubans.” Some NGOs, such as Human Rights Watch (HRW), have also expressed the need for other international organizations, such as the UN, to publicly show their support for the civic march of 15-N: “The governments that have a diplomatic presence in Cuba, that interact with their government, they should publicly defend the right to peaceful protest. And even more. I hope that the United Nations High Commissioner for Human Rights, Michelle Bachelet, who finally spoke out on the situation in Cuba and called for peaceful protest, five days after 9/11, will intervene soon and make a statement demanding that the Cuban government that respects the right to peaceful protest “, declared a few days ago José Miguel Vivanco, director of HRW’s Americas Division, during an interview with ABC.