The corona situation is tense, the Robert Koch Institute is tightening the risk assessment. There is a lot to do for the federal and state health ministers who are still meeting on Lake Constance until Friday.

Berlin / Lindau – Against the background of a tightened risk assessment by the Robert Koch Institute, the federal and state health ministers are continuing their deliberations on measures to combat corona today. In the early afternoon (1 p.m.) they want to announce resolutions in Lindau on Lake Constance if possible.

How is the situation?

For incompletely or not vaccinated people, the RKI changed the risk assessment from “high” to “very high”, as can be seen from the weekly report published on Thursday evening. “For fully vaccinated people, the risk is assessed as moderate, but increasing due to the increasing number of infections,” it said. A week ago, the risk for vaccinated people was described as “moderate” in the report. However, the RKI also emphasizes that all vaccines available in this country “according to the current state of knowledge, with full vaccination effectively protect against serious illness”.

The current development of the situation is “very worrying”, writes the RKI. If measures such as masks, spacing, reducing contacts and ventilation do not quickly reduce the number of infections, a further increase in serious illnesses and deaths is to be feared. According to the report, the treatment capacities of the intensive care units could also be exceeded in this case.

What next with retirement and nursing homes?

The health ministers are talking in Lindau about expanding the mandatory testing in nursing homes. The acting Federal Health Minister Jens Spahn advertised in the ARD “Tagesthemen” for the introduction of a “mandatory test in old people’s and nursing homes by federal law”. It is incomprehensible to him that people who work with sick people and those in need of care, if they do not have themselves vaccinated, “unnecessarily put them at risk,” said Spahn. The executive head of the Chancellery, Helge Braun (CDU), spoke out in favor of it on the ZDF program “Maybrit Illner”.

The President of the German District Association, Reinhard Sager, also pleaded in the newspapers of the Funke media group (Friday) for compulsory vaccination for nurses. “It is important to protect the particularly vulnerable people particularly effectively,” said Sager, justifying his request. The head of the National Association of Statutory Health Insurance Physicians (KBV), Andreas Gassen, shared a lack of understanding on ZDF about forces who work in homes without vaccinations. Gassen also pointed out the shortage of nursing staff and the risk that employees no longer come to work if they are required to be vaccinated.

The President of the Federal Association of Private Providers of Social Services (bpa), Bernd Meurer, declined to have a vaccination in an interview with the editorial network Germany (RND / Friday). The discussion distracts from the failure to implement booster vaccinations quickly and across the board. Christel Bienstein, President of the German Professional Association for Nursing Professions, also spoke out against compulsory vaccination in the Funke newspapers.

Around 2.4 million people have received such a “booster” vaccination so far. The health ministers agree on their purpose six months after the second vaccination. The Secretary General of the German Society for Immunology, Carsten Watzl, also expects a lot from it. “People get a kind of super protection, so to speak, and can hardly pass the corona virus on,” he told the “Augsburger Allgemeine” (Friday). “If the virus hits someone like that, then the pathogen is the end of the line and the spread is stopped,” added the immunologist.

“The vaccinated risk groups are now at risk again, you have to be careful,” said the Leipzig epidemiologist Markus Scholz. That is why people over 70 years of age urgently need a “booster”, and such a refresh would also make sense for everyone else, said Schol of the German Press Agency and epidemiology of the University of Leipzig.

The health policy spokeswoman for the SPD parliamentary group, Sabine Dittmar, told the “Passauer Neue Presse” (Friday): “If you want a booster vaccination six months after the second vaccination, you should get it.” Dittmar, a doctor by profession, called her colleagues for vaccination. “I don’t understand some of my doctor colleagues if they don’t vaccinate,” said Dittmar. Left parliamentary group leader Dietmar Bartsch called in the “Neue Osnabrücker Zeitung” (Friday) to bring the health insurance companies on board to write to insured persons for third-party vaccinations.

KBV boss Gassen does not see the booster vaccinations as a big problem. The third vaccinations will be managed. But the large group of unvaccinated people remains. These people would more or less all become infected by spring. “That remains a huge problem,” said Gassen.

Is a new lockdown looming?

Hardly likely. Spahn emphasized on the TV broadcaster RTL that the decisive difference to 2020 is that you now have the instrument of vaccination. “Quite a lot of everyday life is possible” again. “It is only important that this is and remains an everyday routine with caution,” warned Spahn. With 3G rules for vaccinated, convalescent and tested people or 2G rules only for vaccinated and convalescent people in regions with high levels of infection. 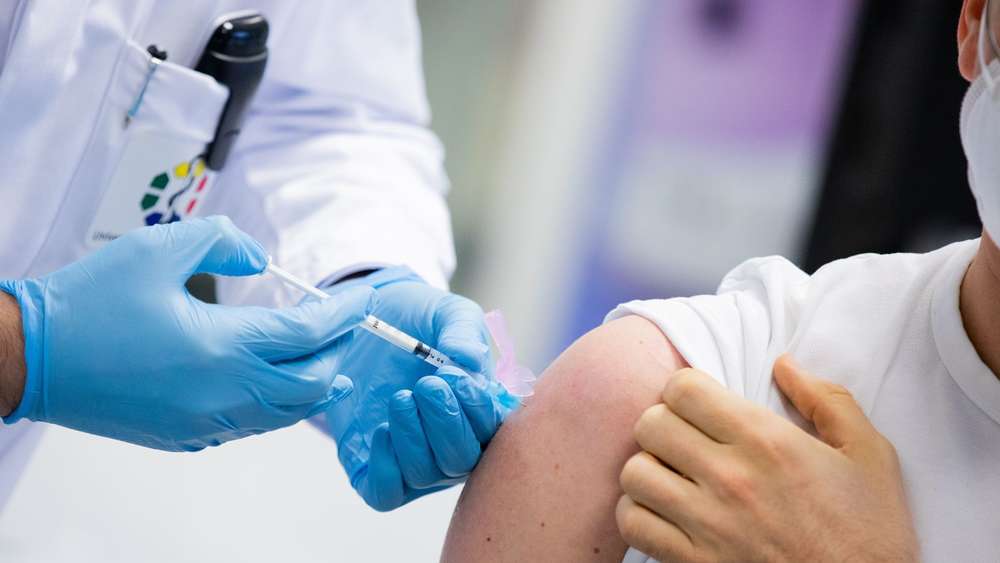 The flu and corona waves are threatening to come together

Risk of flu: While millions of people are still not vaccinated against Corona, the flu threatens to spread in Germany. Authorities and government urgently call for protection.

The flu and corona waves are threatening to come together

Despite the increasing number of corona infections, Saxony is planning to make major events easier and exceptions for Christmas markets and mountain parades. The mask in class should also fall from November 8th. The cabinet still has to approve the plans.

However, Spahn had already called for more thorough controls of access rules, especially in the catering trade. The German Hotel and Restaurant Association responded with a warning to the companies to implement the requirements consistently. “No ifs or buts: The applicable corona protective measures must be observed by all companies. This includes, in particular, consistent access control, ”said the association’s general manager, Ingrid Hartges, of the German Press Agency.

Financial support for hospitals is also on the agenda of the Health Ministers’ Conference. Should clinics to care for corona patients have to postpone interventions again, “a targeted financial compensation regulation” would be necessary, according to a draft resolution from several countries for the conference, which is available to the German Press Agency. The Federal Ministry of Health should therefore enable compensation payments from the health fund. First of all, the “Business Insider” reported on it. dpa