Spain, an expert in escaping the abyss 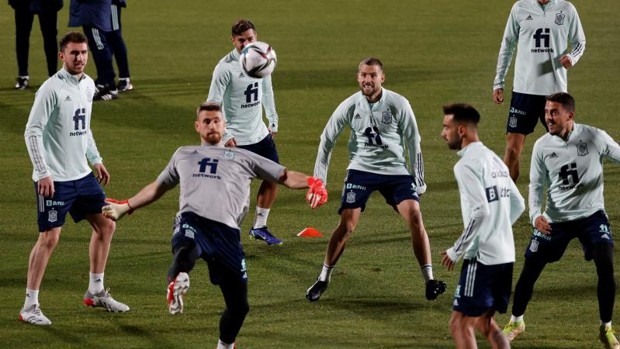 Spain gets serious. Despite the broad smiles that the players showed upon their arrival in Las Rozas, the situation demands a lot of rigor, and in fact the internationals are aware. A World Cup is at stake, or at least the quickest and least harrowing way to get there. There is no other choice but to win the two remaining games to finish the qualifying phase. The first, the most immediate, will be this Thursday in Athens, against Greece. If he succeeds, everything will be a face to cross against Sweden at La Cartuja, on Sunday. It is no small thing. “These games do generate pressure on me, that’s the way it is,” admitted Luis Enrique last week, who feels the weight of responsibility on his back. “I hope I don’t pass it on to the players,” he confessed. And it is quite likely that he knows how to do it. He himself found himself in a similar situation, almost identical, no less than 28 years ago (November 17, 1993, when he started in the game where Spain played a card to qualify for the 1994 World Cup in the United States. It was Denmark, and due to the circumstances in which the match took place it continues to be an example of resistance and honor for the Spanish team. Spain, who could not lose, played 80 minutes with one less player due to the expulsion of Andoni Zubizarreta. Santi Cañizares, who made his debut in goal. The former Valencia goalkeeper ended up becoming one of the heroes, because he stopped everything. The other was Fernando Hierro, who scored the goal in the second half, which gave peace to the team. “I remember that feeling in the locker room that we played everything, but also the illusion of going to a World Cup, which for many was the first time “, Jon Andoni Goikoetxea, responsible for launching the ball from the corner, tells ABC n that ended up nodding Hierro to Schmeichel’s net. «The game was critical and it got complicated for us very soon. We had to take the rest. Luckily we were a very strong team physically, with players of enormous physical power. That helped us to hold out for so long with one less player. ” The role of Sevilla Goikoetxea also keeps fresh in the memory the atmosphere that was lived in the Sánchez Pizjuán, scene of that mythical duel: «People played an important role, they pushed us during the ninety minutes. I have great memories of that game, although I ended up very badly, wandering around the field because I couldn’t handle my boots ». Jon Andoni Goikoetxea, Another compromising situation saved on the bell was the indelible 12-1 to Malta, in December 1983 and also in Seville, although this time at Benito Villamarín. Spain was playing the pass to the final phase of the Eurocup the following year, where it was later runner-up, and needed an absolute machado: win by eleven goals difference to equalize points with the Netherlands and qualify thanks to the ‘goal average’. At the break, with 3-1, the feat seems a chimera. But that second half, in which nine goals were scored, will be recorded forever as one of the most extraordinary moments of the national team. “We knew it was very difficult, but the confidence of the team was absolute,” explains Poli Rincón, scorer of four goals that magical night. “Before the game there was no talk of tactics. Miguel Muñoz made us very mental. ‘Gentlemen, leave your life for this shield’, he repeated to us ». Two years later, Rincón lived another similar experience, as the qualification for the World Cup in Mexico 86 was decided in another agonizing match that beat Iceland 2-1. «They scored first and it was only worth winning for us. The Villamarín public again pulled the team. I scored the equalizer just before half-time and Gordillo turned the game around in the second half ». They also had to row in the qualifying phase of Euro 2008, which had been very uphill after a draw in Iceland and losses to Northern Ireland and Sweden. Everything happened to beat Denmark at home. The atmosphere was not ideal because Luis Aragonés was more questioned than ever, but that day Spain grew again. He won 1-3 and earned his place in a tournament that he would later win. But there was more. According to the chronicles, that day the ‘tiqui-taca’ was born. Poli Rincón, “Spain does not usually fail on these occasions, and I am sure that Luis Enrique will know how to convey to the team the importance of these clashes,” Goikoetxea concludes. “The sad thing is that we have reached this situation,” laments Rincón. “It was an affordable group and we are expecting two games to the dog’s eye.”