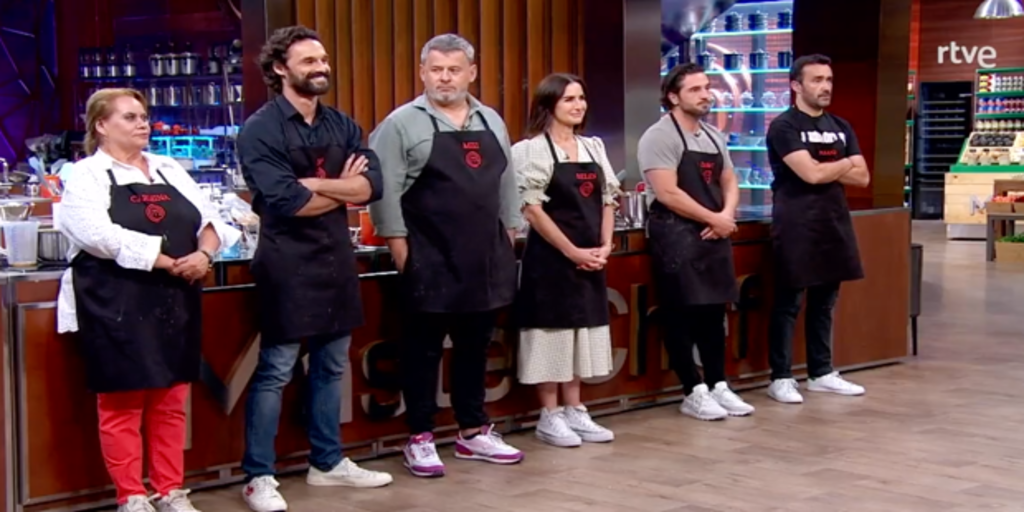 Masterchef Celebrity 6 ‘continues to advance towards the final. After the expulsion of Eduardo Navarrete last week, the competition has squeezed its ninth gala tonight. And it has been moved; level, put Arkano on the street in the first test for a plate without “sabooor” and to designate Verónica Forqué captain in a team event.

The initial challenge has been described by the judges as, “a fun culinary challenge in which they will have a great time as children”: a “very special” Game of the Goose. That in the imaginary of Pepe, Samantha and Jordi means proof worthy of ‘The Squid Game’. The purpose of such a dynamic with an evil background consisted in the elaboration of a free dish (not simple), with the ingredients obtained after a game through the squares of the board, which also included negative squares, such as jail, the skull or the thief. Miki Nadal, as the winner, has been able to enter the supermarket with total freedom. On the other hand, the ‘celebrities’ have had 75 minutes to prepare their dishes, except Juanma Castaño, David Bustamante, Verónica Forqué and Arkano, who they have lost 10 minutes due to chance; Carmina Barrios has also earned advice from Jordi Cruz.

After the game of the goose ‘Masterchef’, Iván Sánchez has opted for making a ‘carrot cake’ with its ingredients; Carmina, rice with pigeon; David Bustamante, a viceroy; Miki Nadal, fresh pasta; Verónica Forqué has threatened a sea and mountain of cuttlefish and pigeon; Belén López, for her part, has suffered with demonic spherifications; Juanma Castaño has been unable to use the oven; and Arkano’s pigeon dish, has then led him directly to expulsion.

In the midst of this calculus, Boris Izaguirre, ‘MasterChef Celebrity 3’ aspirant and ‘MasterChef Celebrity 4’ finalist, has acted as master of ceremonies, while five of the nicest aspirants of ‘MasterChef 9’ (José, Meri , Toni, Jiaping and José María) have tasted the dishes. “I never thought I was going to win any test!” Exclaimed the champion of the first challenge. Judges and guests have unanimously proclaimed Verónica Forqué the winner. Triple victory, as he came with a golden apron as a gift, ensuring his stay one more week in ‘Masterchef Celebrity’, regardless of the routes of the elimination test. In addition, he has been able to donate 4,000 euros to Open Arms, and say goodbye to Arkano in his own way. “9 weeks, boy, not bad.”

Luckily Juanma Castaño has made up for it with a few words more in line with the mini drama of the rest of the applicants. «This boy is the idol of many young people in Spain and I can tell the parents of these young people that their children admire a great person. And that is very important, to a guy who is very worthwhile.

Competing with the ‘juniors’

With one less, they have headed to the Cadiz town of Puerto de Santa María in order to celebrate the seventh anniversary of the MasterChef Camps in the outdoor test. Unlike the usual dynamics, the applicants have worked together in the same team, led by Verónica Forqué. His opponents: Aurora, Lu, Josetxo, Nico, Henar, Javier and Antony, participants in different editions of ‘MasterChef Junior’.

Both ‘celebrities’ with the blue team, and ‘juniors’ with the red one, have prepared a tasting of six tapas with a taste of the Bay that, on paper, made you want to ransack the fridge: oil cake, white chocolate, orange and orange blossom, praline cone and walnut ice cream, bull meat brioche with Cacereña olive emulsion and pickled cucumber, netiguilla risotto and plankton with gordal olive air, black hojiblanca olive cake and seasoned carrots and Manzanilla olive soup with sardine and its thorn.

But within ten seconds of starting the cooking, the mess was already mounted on the blue stove. Tonight, to Verónica Forqué had to bring out her grumpy smurf facet at its best. «Don’t tell me what to do, I’m the captain! Shut up! ». The pressure has reached such a level that Carmina Barrios has ended up crying, as a result of a reprimand from the captain for the salt in the oxtail stew that she was preparing.

Moments later, Forqué also drove Belén López mad. It is already customary for the actress to pull elaborations from her team just for the sake of it; today, commanding, it was not going to be less. The fish bones that his professional colleague had prepared for frying have ended up in the trash since, according to his criteria, “that was useless!” The captain’s ‘show’ lacked only one threat, but she does not disappoint. “If we lose the test for you, you’re going to shit,” he asserted to Belén. “This is not cooking, it is an extreme psychological test that will have consequences for life,” added Juanma Castaño. Fed up with the chaos and lack of control, the Blues have ventured into a coup, sending their leader out for a boat ride.

Quite the opposite of the cooking of the little ones, who, even with flaws, have worked methodically and well organized. The most precise summary of the test has been expressed by chef Ángel León, from the Aponiente restaurant: “The blue thing is a tragedy, and something wonderful is happening in the red stove.” Needless to say, the culinary duel has been resolved, still with flaws, with a thrashing of the ‘juniors’.

Thus, everyone, except Verónica, has returned to the set of ‘Masterchef’ wearing a black apron, having to face the elimination test atThe worst dishes made by themselves in the kitchens.

Specifically, Juanma Castaño has cooked a ‘bavarois’ of coffee; Carmina, you must have improved a turkey stew. Iván Sánchez’s plate was a double-edged sword, as it was a “peach with bonito”, a recipe that the judges have considered quite simple. David Bustamante, for his part, has faced a red blood; Belén López, with mackerel; and Miki Nadal, a crispy pork. As for Verónica Forqué, she has preserved her immunity, but she has also suffered from cooking in her meats … with chaotic results and reflection for her list of famous phrases. Time is my great enemy. I have to make him my partner, although I don’t know if he will.

Of the aspirants on the tightrope, Carmina has achieved “a really delicious dish.” Like Belén López, who has presented a “delicious” elaboration of mackerel. Also triumphant, Juanma Castaño has been congratulated for “one of the best desserts of the edition.”

In an average term, the judges have valued the elaborations “loose, with lights and shadows” of Miki Nadal and David Bustamante. Only Iván has fared even worse with his plate than the first time, becoming the eleventh sent off. from ‘Masterchef Celebrity 6’.