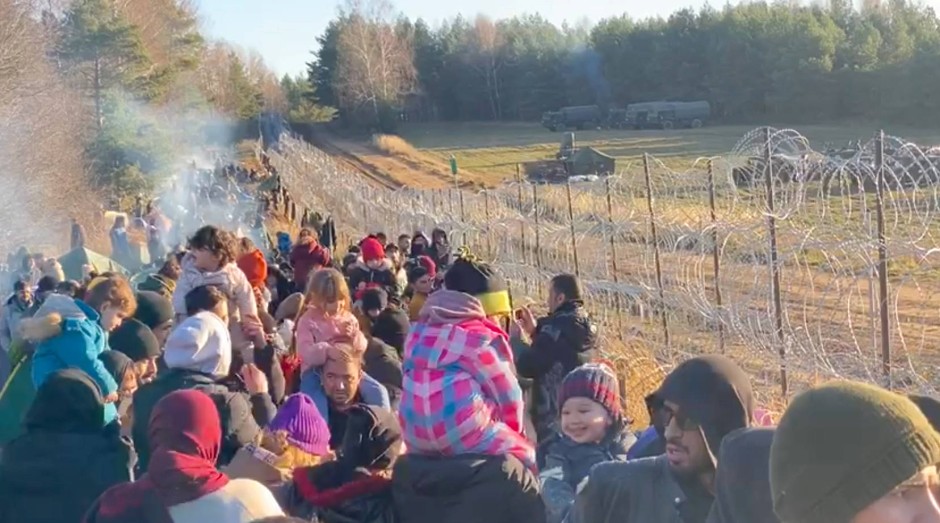 Dhe Polish police stopped a bus of German refugee activists who were on their way to the border with Belarus. The bus from the Seebrücke Deutschland and LeaveNoOneBehind initiatives was not allowed to travel eastwards a few kilometers from the Kuznica border crossing on Tuesday evening. Poland has declared a state of emergency in a three-kilometer zone along the border. Aid organizations are not allowed in. The activists had previously handed over relief supplies such as winter shoes and blankets to a Polish organization.

Originally, they had planned to take migrants back to Germany with them. However, the Federal Ministry of the Interior warned that “unauthorized transport and any unauthorized entry” could have criminal consequences. A spokesman for the group, Ruben Neugebauer, said: “We want to send a sign of solidarity here. It is the day the wall came down and it is important that we choose human rights instead of walls: “Europe must not allow itself to be blackmailed by a“ dictator ”.

A large number of migrants from countries such as Syria and Afghanistan who want to go to the West are waiting on the Belarusian side of the border. According to Polish sources, thousands of migrants ran from the Belarusian side towards the Polish border. Larger groups tried to break through a fence. The EU accuses Belarusian ruler Alexander Lukashenko of having people flown in from crisis regions such as Afghanistan and Syria in order to then smuggle them into the EU.

In view of the escalating situation, Council Chairman Charles Michel has called on the other EU member states to support Poland, Latvia and Lithuania. “Polish and Baltic borders are EU borders. One for all and all for one, ”said the Belgian on Tuesday in a speech on the anniversary of the fall of the Berlin Wall. You are facing a brutal hybrid attack. The former Soviet Republic of Belarus cynically uses the plight of migrants as a weapon.

Michel referred to the EU summit in October, which had condemned the Belarusian approach. The EU Commission had been asked to propose all necessary measures in accordance with EU law and international obligations. In addition, the financing of the infrastructure at the borders must be clarified quickly. This Wednesday Michel wants to meet with Poland’s Prime Minister Mateusz Morawiecki in Warsaw.

He spoke of a “hybrid attack by the Lukashenko regime” – that is, the use of attack methods while concealing tactics. This is directed against the entire European community, explained Morawiecki in the online service Twitter.

Morawiecki also accused Russia of being the real mastermind of the refugee dispute. Lukashenko was “the executor”, but Russian President Vladimir Putin was the “client”, he said at an emergency session of the Polish parliament.

Federal Interior Minister Horst Seehofer (CSU) called for additional help. “Poland or Germany cannot cope with that alone,” he told the Bild newspaper. “We have to help the Polish government secure the external border. That would actually be the task of the EU Commission. “

Twelve EU countries – including Poland, Lithuania and Latvia, but also Denmark, Austria and Hungary – had already asked the EU Commission at the beginning of October that “physical barriers” against unwanted migration at the external borders be at least partially financed from EU funds . However, Commission President Ursula von der Leyen rejected this.