A runaway CPI at 6% turns salary negotiation into a battle

The price of electricity was the second highest in history in January, oil is at its highest since 2014 and all this is causing an inflationary spiral that continues to impoverish workers. With this background scenario, the OTHER gave a slight respite yesterday: annual inflation stood at 6% in January, compared to 6.5% in December, its first drop since February 2021. Core inflation – which excludes energy prices and fresh food -, on the other hand, rose three tenths, to stand at 2.4%, its highest rate since October 2012.

Against this backdrop, negotiations between employers and trade unions have begun in search of

of a V Interconfederal Collective Bargaining Agreement (known as ANC), in which the social partners will include the guidelines that should govern the collective agreements in the next two or three years. The moment for this agreement is complicated, taking into account that the purchasing power of the workers suffers in a notable way in a context in which the companies are also struggling to stay afloat after two years of Covid.

The social partners are finalizing their proposals to meet again in March, but UGT It has already slipped that they will demand salary increases of 5% so that this exercise the workers do not lose purchasing power, which they also want to avoid with the extension of the salary review clauses. The requests collide with the offer in which the employers are working, around 2.5% and 3%, in line with average and underlying inflation.

Although January gave a slight respite to prices, the purchasing power of citizens suffers significantly, taking into account that salaries have been stagnant for more than a year at around 1.5% in a context in which spending They multiply. The average increase agreed in the collective agreements signed last year was 1.47%, four times less than the evolution of the IPC from January. The salary variation is the lowest since Spain was in negative inflation rates, between 2014 and 2016; the difference is that now prices are through the roof. This brake on the rise in salaries supposes, for its part, a barrier to inflation, which in turn avoids the effects of the so-called second round.

The inflationary contagion has not spread to salaries due to various factors. The possibility of gaps introduced by the labor reform is a clear brake on wage growth. In addition, in recent years the collective agreements that have salary guarantee clauses have been reduced, that is, that are linked to the evolution of prices. Of the 7 million who had their salary conditions agreed, only 17% (less than 1.2 million) have a salary safeguard clause, one of the lowest percentages recorded in the last 20 years. 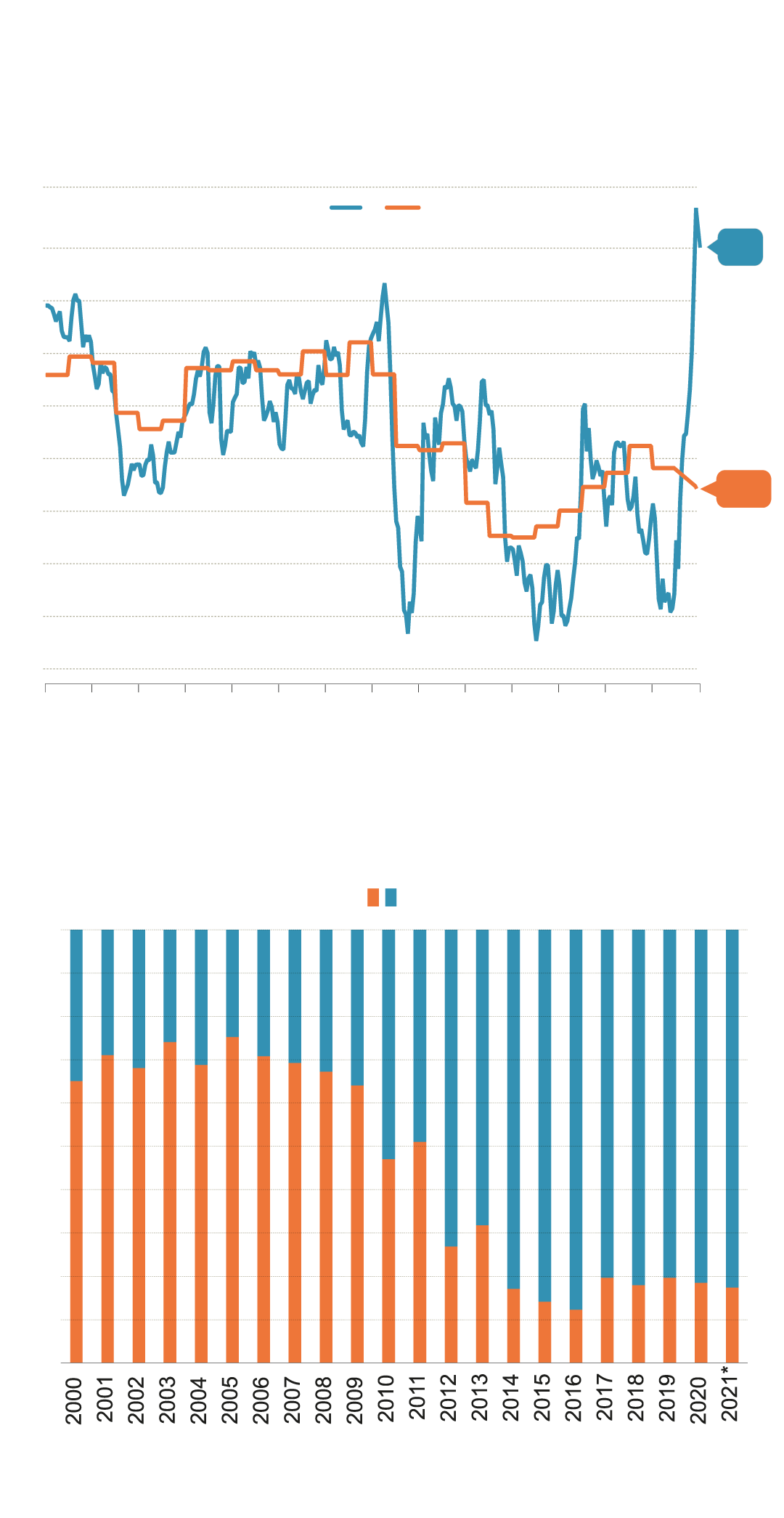 The link between prices and wages

Workers with and without salary guarantee clause

contemplated in the collective agreement

As a percentage of the total.

Workers with and without clause

As a percentage of the total.

Afi, INE, Ministry of Labor and Social Economy ABC From the union ranks it is insisted that the workers cannot continue losing purchasing power, but from the business ranks it is also argued that the companies are losing competitiveness. «The key in the negotiation of the new ANC It should be how to improve the competitiveness of our companies, because that is the way to guarantee both higher salaries and higher levels of hiring over time. That is to say, we would all like to be able to offer higher salaries, but it is important to establish in exchange for which productivity tools of the companies”, he assures Francisco Aranda, spokesman for CEIMY

He reminds ABC that December inflation in Spain exceeded that of Germany and Italy and doubled that of France “because the Government continues without putting a brake on the extra cost of our energy caused by high rates and taxes.” He explains that “we already have a very weakened competitiveness of our exports due to the growing price differential with the rest of the euro zone and adds that a new rise in costs, without increases in productivity, would undermine the growth capacity of the economy and, therefore, therefore, to generate employment.

Aranda reports that “productivity has plummeted 4.8% over the last two years, and it has also done so, coinciding with a sharp increase in labor costs, taxes, supplies and, above all, the bill electrical. And all of this is stifling businesses even in a time of recovery. Today it would be necessary to have 5.1% more employed people in Spain to obtain the same GDP as before the crisis, because productivity has sunk. commitmentsFaced with this situation, the unions urge the Government to urgently comply with the commitments made throughout its legislature. They demand that the minimum wage reach 1,000 euros retroactively to January 1 and stand at 60% of the average wage (around 1,050 euros) in 2023, in line with the recommendations made by the group of Labor experts. The second vice president and head of this department,

Yolanda Diaz , has summoned the social agents next week to begin negotiating the increase in the indicator, which the business organization continues to reject because it understands that this is not the time and could harm employment. The conflict in this case is also assured. The question now is to know when inflation, the so-called tax on the poor, which continues to be a problem for the Government due to its impact on the economy, will begin to fall. His hope is that it begins to yield in the spring, in which some analysis houses also agree. The panel forecasts Funcasforecast for this 2022 an average inflation of 3.5%, and 3.7% the Bank of Spain . The longer high prices continue, the more pressure will grow for companies to revalue wages at the same level as inflation in order to stop the loss of purchasing power, a phenomenon that the

he fears for its potential to fuel an inflationary spiral in which payrolls and prices feed off each other.