«There is no way to compare myself with Tom Cruise; he is a legend and I am not»

Alan Ritchson (39) is the new protagonist of the action series ‘Reacher’, whose first season premieres on Amazon Prime Video this Friday the 4th.

In it, Ritchson plays the hard-hitting former military police investigator arrested for a murder he didn’t commit and trying to prove they’ve got the wrong guy. Jack Reacher arises from the mythical saga of books written by Lee Child, a very nineties-style hero who revives on the platform after being interpreted twice for the cinema by Tom Cruise.

Speaking of the mysticism of this mysterious hero, Ritchson he admits in the interview that he is surprised to be compared to the ‘Mission: Impossible’ star, although he is flattered by it. Set in Georgia, the eight-episode first season co-stars Malcolm Goodwin, Willa Fitzgerald and Harvey Guillen.

What were the most difficult scenes to shoot in this new series?

One of the most difficult scenes for me was the first one we shot at the beginning because of the pressure we had to get it right. It’s a six-page interrogation scene that ended up being a terrifying process for me.

Was Schwarzenegger inspired to create the character?

No. In this character I am channeling my own inner desire to bring criminals to justice. I walk with an anger below the surface wanting to see a more just world. Reacher allows me to get out that anger that I keep and that focus amuses me. I really enjoy shooting the scenes when the bad guys get their due. Unfortunately, I never channeled Schwarzenegger.

Is physical appearance important for the conception of the character?

Yes, the physical appearance is a character in itself within the books. That’s something that the producers, the writers and I wanted to get right. I put on 30 pounds to play this role because Jack is such a big guy on paper. Reacher is someone who impresses every time he walks into a room; people wonder if he is a friend or an enemy, hoping that he is a friend. The experience has given me a certain advantage to be a better collaborator. I know how to act depending on the lens the director is working with.

Do you think Tom Cruise is better at playing this character?

There is no way to compare myself to Tom Cruise; he is a legend and I am not. I want to look back at Lee Child’s books and work, honor his writing to create the best Jack Reacher I can. It’s weird that Tom Cruise is mentioned in the same sentence as my name, but I’m grateful to add Jack Reacher to my legacy, give him new life and tell the story from a different perspective. 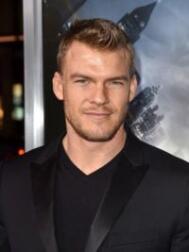 Aquaman (‘Smallville’) was my first role and many years have passed between then and now. In my youth I was a happy kid to use ‘speedo’ all day. I think there’s a youthful seriousness to Aquaman that’s related to Reacher; the former is a guy with a lot of pain and skeletons in his closet while Reacher is different because his past doesn’t necessarily weigh on him.

What’s the most fun about playing Reacher?

I remember when I was offered the part, someone asked me about my favorite quality of Reacher, I wasn’t familiar with all the books yet, and I said at the time: the way he walks into a room without thinking, his ability to deconstruct space and analyze it. Now I also like his brutal honesty, the fact that he doesn’t give a shit what people think of him.

Have you given your personal touch to the character?

Let’s hope not. The kind of actor I’ve always wanted to emulate are those character actors trapped in the body of a personality actor. Look at Leonardo DiCaprio, someone who becomes his characters and magically makes us forget that he is Leonardo DiCaprio. I want to give the same gift to the public so hopefully they will forget about me.

Was he a fan of Jack Reacher or did he have to do some research for the part?

I read all the books just before signing this project. I regret the decades I missed out on enjoying Reacher before discovering him for the series.