a Madrilenian born in La Coruña 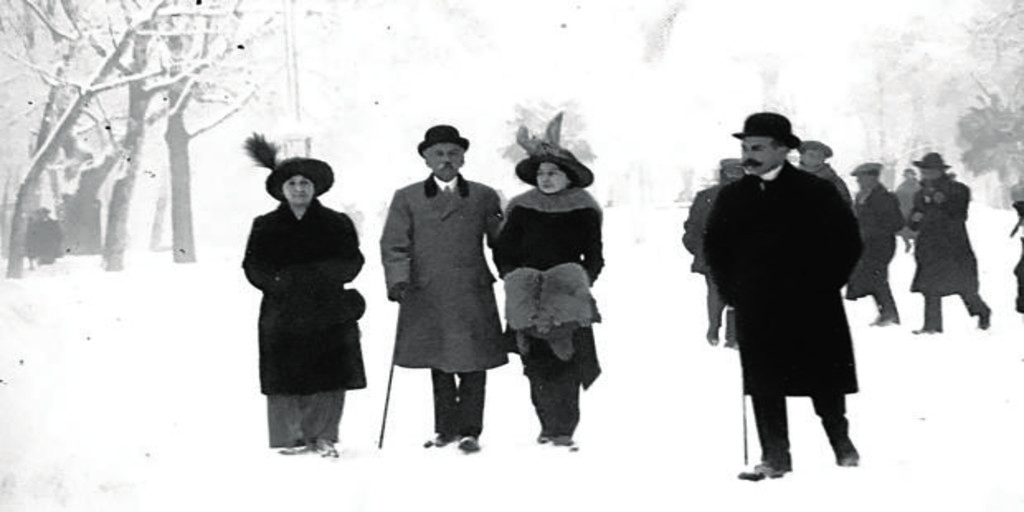 Eduardo Dato and Iradier He was born in La Coruña on August 12, 1856. He did so there because his father, the then Lieutenant Colonel Carlos Dato, was stationed in Galicia. Historians maintain that he always felt more linked to Álava – his mother was from there and his wife was born in Vitoria – although it is no less true that the city in which he spent the most time of his life was Madrid. In it, on March 8, 1921 – tomorrow a century ago – he was vilely assassinated after his official car was machine-gunned at the Puerta de Alcalá, meters from his house, at 4 Calle de Lagasca. There he had his office as a lawyer. In that building that has disappeared today, he lived with his wife Maria del Carmen Barrenechea with whom he had a son –Eduardo, who died at 18 months of birth and who was buried in March 1883 in the disappeared Sacramental of San Ginés and San Luis, on the outskirts of Fuencarral– and three daughters, Isabel, Carmen and Concepción.

Eclipsed by his meteoric political career in the Conservative Party until he became president of the Council of Ministers three times, his role as mayor of Madrid it is perhaps the most unknown. Despite the brevity of his position in the Villa House, between January 28 and May 7, 1907, Dato did not hide his attachment to the capital. «He loves Madrid and feels that he was not born there; but in Madrid are the ashes of their parents and in Madrid their children were born ”, read the chronicle of his inauguration in the former and defunct El País.

From that Madrid where he arrived as a child some of the buildings in which he had a prominent presence still survive. Among them, Pious Schools of San Antón, where he studied as a teenager, or the central University, on Calle San Bernardo, which today is the Auditorium of the Complutense. There he enrolled and graduated in Civil and Canon Law when he was only 19 years old. It is known that the family – his mother died shortly after arriving in Madrid – had his address in the street of the Knight of Grace. At university he came into contact with his future brothers-in-law and thanks to their friendship he met his future wife. From the obituaries of his son, published in newspapers such as El Imparcial, it is known that both lived in March 1883 in the number 1 of Calle del Barquillo. A building of luxurious homes that was later bought by Banca Urquijo and that today is the headquarters of the National Markets and Competition Commission.

Dato’s prosperous career began in his first office, on the street of Fuencarral, 53 –This is how the historian Roberto Costa puts it in his doctoral thesis on his figure–. Among his famous clients, he highlighted the defense of the Duchess of Castro-Enríquez and was legal advisor in Spain of the Rothschild and Bauer families. Also of Pedro Álvarez Carballo and Bueno, whose lawsuits and the professional success that Dato had in them, is associated with the fact that he could build his family mansion right in front of the parish of San Manuel and San Benito.

The social chronicles on the family life of his wife Carmen, the future Duchess of Dato, for example the one published in 1900 in the Elegance magazine, describe the president’s home as welcoming. To the point of emphasizing that, every Sunday, the daughters – then 15, 14 and 9 years old – taught a large group of “poor girls.” The social agenda of marriage in Madrid’s ‘high life’ took place above all in the Barrio de Salamanca. His walks through the Retreat accompanied by his daughters were also frequent, as some of the photos that are preserved in the family archive attest. One of them, the one that illustrates the headline of this report, is taken during one of the great snowfalls that hit the capital in 1904 or 1907 – it is not dated – and that left pictures similar to those experienced this year with the storm Filomena.

Other curious reviews, such as those of New Club of which Dato was a regular and that is still open to his partners today, describe how the president “had his house collapsed” in the absence of his family and preferred to eat there. There are also numerous snapshots of the politician with the Rey Alfonso XIII, with whom he maintained a close bond of friendship and who led the funeral procession for his funeral, in places such as the shooting club in Somontes.

Before his grave, in the Pantheon of Illustrious Men of Atocha, he will be honored on the 16th and it is expected that members of the Government, the City Council, the Madrid Bar Association as well as some of his descendants will attend. “He lived for the country and died for it,” says his funerary monument. Dato could not be born in Madrid and died, sadly, here. His City Council, of which he was also a fleeting part, will install – the date is unknown – a plaque at the site of the assassination.