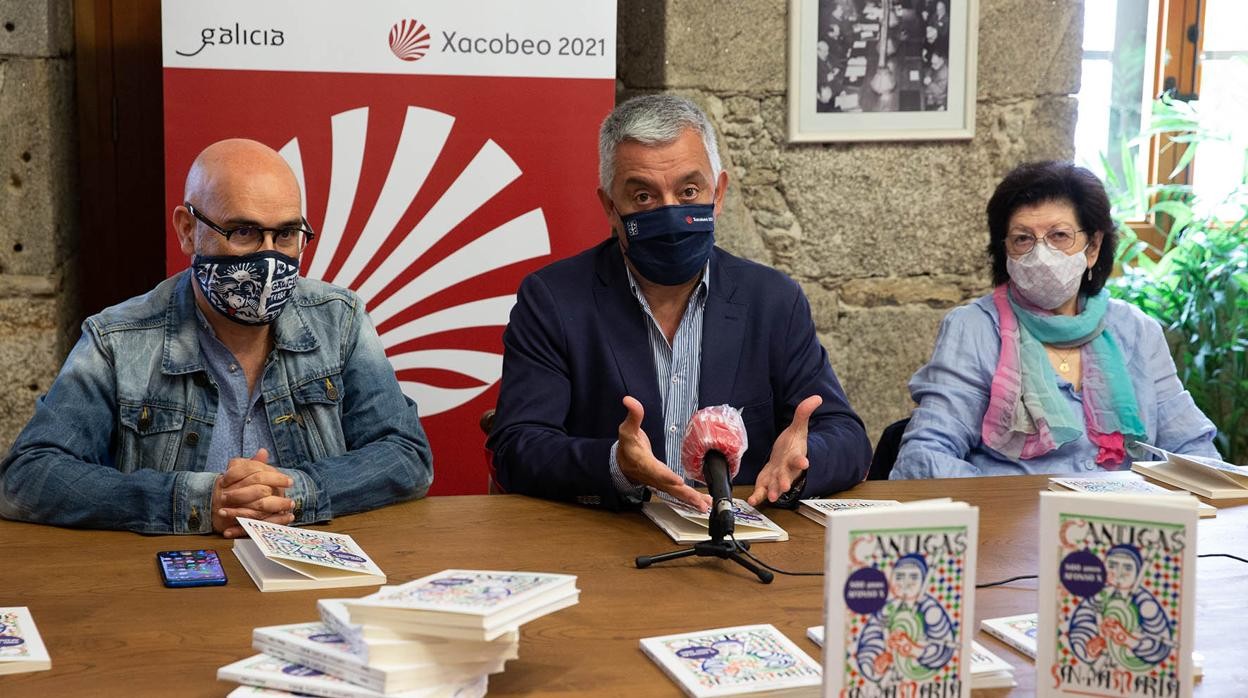 Eight hundred years after the death of one of the most prominent monarchs in the history of Spain -at least in the cultural section-, one of his top literary works returns to the media scene after its recent reissue, the ‘Cantigas de Santa María’. Alfonso X «the Wise» He was the author of this work, one of the most important in medieval literature, and today the new image of its facsimile edition has been presented in Santiago de Composetela, by Editorial Galaxia.

The Pazo de San Roque hosted the press conference where the new version of the book was shown of the ‘Cantigas de Santa María’. An event that included Valentín García, Secretary General for Language Policy; Mercedes Brea, collaborating researcher at the Ramón Piñeiro Center; Francisco Castro, general director of Editorial Galaxia; Armando Requeixo, director of the Álvaro Cunqueiro House Museum; and Pilar Lorenzo, an expert in medieval lyric. The attendees insisted that it was a time to “celebrate”, especially taking into account the events of the previous day. They were referring to the news that National Heritage had digitized two codices of the ‘Cantigas de Alfonso X‘opening your content to everyone. “We all missed access to the two most important codices,” says Mercedes Brea. “Fantastic news” added to this morning.

The work of Alfonso X can be understood in many ways, but in the presentation they have wanted it understand (or share) as “a vindication of Galician as a poetic language”. “And Galician, not Galician-Portuguese, which obviously belongs to a linguistic block, but this does not have much of current Portuguese”, comments the collaborator of the Ramón Piñeiro Center. It is the first time that Galician has been given dignity as a literary language, and more taking into account the magnitude of the work of Alfonso X, who “could have chosen Castilian, and did not.”

This book, as much as it focuses on the original work of the monarch, has another recognizable protagonist, Álvaro Cunqueiro. The man who made it possible to select and unify various poems from the Cantigas in the same work, back in 1980, which has been recovered. It is so important that the 21st century edition maintains the choice made by Cunqueiro, the prologue and the modern version, attributing to the Galician scholar all the recognition it deserves. His name, far from being named glancingly, takes up a large part of the act. “Cunqueiro had a special weakness for medieval times”, says Armando Requeixo. To which if we add his “deeply religious” existence, we understand his interest in the specific subject. «He not only had a passion for medieval literature, but he was also a great connoisseur of it; I had to read everything I found », clarifies Mercedes Brea.

In general terms, the intention of Editorial Galaxia was to make a facsimile edition “as faithful as possible to the original”, in the words of Fran Castro. An intention that seems to have been completed, since its structure, the paper of its leaves -choose to emulate the role of the 80s-, and his style – in which “the hand of Cunqueiro is very noticeable,” says Pilar Lorenzo – they honor the original version. Thus, 40 years after the death of the author of Mondoñedo, the work is recovered to shine with its own light, thanks to the illustrations by Xohán Ledo. As four decades ago, the publisher is Galaxia, which keep betting on the content of Cunqueiro despite the passage of time. The reason for opening the trunk of the past? The eight centuries since the birth of Alfonso X «the Wise», which are fulfilled this 2021. In addition to renewing and updating an important piece of Galician literature. As Pilar Lorena says: “We are in a festive year, and this is a good cultural start to which many others will follow.”