Almudena, patron of ‘this’ normality 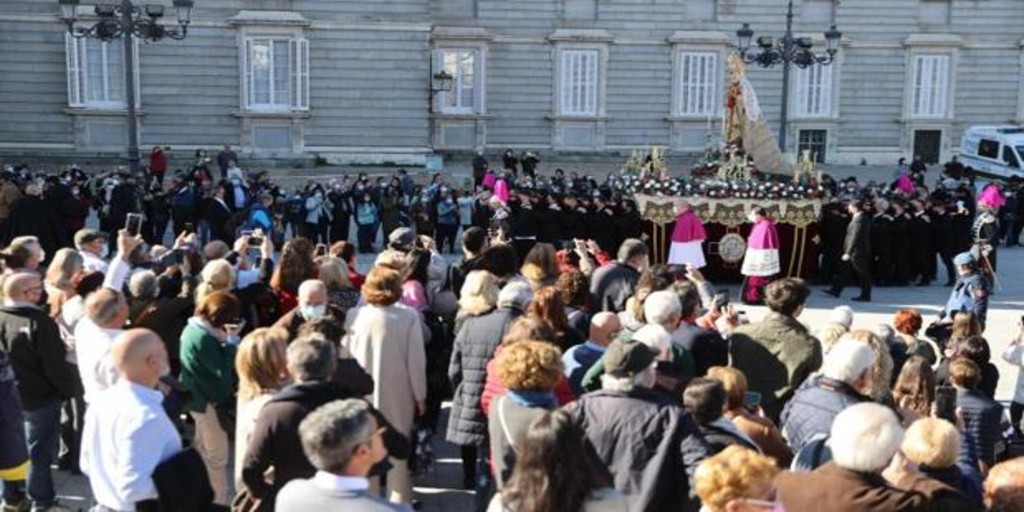 Virgin of the Almudena. Between legends and flowers, between walls and castizos, between honor guard of the Municipal police in full dress and ladies who wore the very Spanish Hispanic capes, the throne arrived at the La Almudena esplanade. The mass, apart from the political morbidity, had the interest of a popular mass, of a public Communion, after the pandemic and everything that this city has suffered. From the first hour, in the newest part of the Almudena Cathedral, the mantillas were preening; those that could, those that arrived with the mists on the bus: one from La Zubia, Granada province, and another, older, who asked “why” was asked so much

with the mask in the mouth. It was not cold, or it was just cold, and in the recesses of the Calle Mayor and the Viaduct of the suicide bombers it echoed like a trembling procession without fear.

In ‘The Old King of Wines’ the girls, the beatas, the brothers of the national brotherhood (sic) of the cape and so on, took off the aforementioned psychological cold. Coffee. A lot of coffee because to receive Communion you have to arrive with a lively soul and a lively stomach. This chronicler, he confesses, never saw so many brotherhoods or associations or traditional or mitres than in the previous procession of La Almudena. He had the journalistic fondness of looking at a fireplace – nonexistent – in case something was chosen, a Pope, but he looked at the clearings in front and saw the healthy people of Madrid with glasses and understood that faith is not a matter of optics but of habit and soul. And then, of course, the procession. And in the procession there was, removing the ‘militareo’ who plays so well, what in Andalusia they call the musical cross, which is nothing more than the scores of what the Band, that of Jesús el Pobre, like the walkers that carried the Patron, they had been ringing. And there were marches such as ‘Tras de ti, mi Cautivo’ or ‘Salud de San Bernardo’ that put heat and a southern trumpet to the patron saint of all Madrilenians.

A procession is penitential or of Glory, but for glory, for political glory, that of the two kiosks that the Partido Popular and Ciudadanos set up in the vicinity of La Almudena: they gave flowers and sold Christmas lottery, that must be liberalism . Because before, from empty Spain, from Machado’s moral Soria (not native), a banner was seen followed by sober cloaks. The goth kings, hieratic in front of the Virgin, is that other picture that must be kept in this Madrid. Cardinal Osorio claimed “that it is not lawful for God to be withdrawn.” Municipal agents brought the most disabled to the ecclesiastical blessing.

Madrid was sunny, it looked like spring, and it even smelled of incense. Because you also learn ‘to Madrid’. In the Royal Palace there was a flagpole without a flag. 20 degrees and “how beautiful is Easter in November,” laughed a couple in their fifties. Bouquets to the Virgin at five euros, which later became four. It was spring in Madrid. Abantos, with his ice hood, paid homage to the patron from afar.

Almudena, oh, the Virgin that they hid in the wall as Antonio told Pablo; next to the goth kings.