An indoor rainbow and an “agricultural temple” on the water, first works of the CaixaForum Valencia 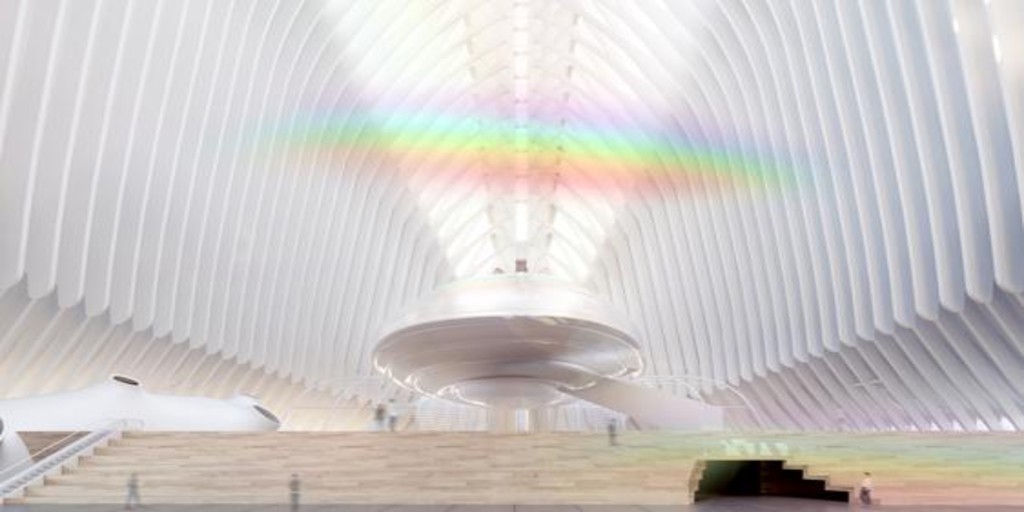 The future CaixaForum of Valencia, which is being set up in the Agora of the City of Arts and Sciences, will feature two “iconic” creations by artists from the Valencian Community that will reinforce “the rooting” of the cultural space to the territory. It’s about a rainbow inside of the building designed by Inma Femenía and of a stilt house located in the outer pond as an “agricultural temple” signed by Anna Talens.

This was announced at a press conference offered this Wednesday in the capital of Turia in which, in addition to the creators, the deputy general director of the Fundación la Caixa, Elisa Duran; the Autonomous Secretary of Tourism of the Generalitat, Francesc Colomer, and the recently appointed director of CaixaForum Valencia, Álvaro Borrás.

The two acquisitions become part of the contemporary art collection of the entity, which already houses a thousand pieces, and represents a new step towards the inauguration of the CaixaForum Valencia, which plans to open its doors to the public in the month of July 2022Durán has advanced.

Pego’s artist Inma Femenía is responsible for ‘Arc al Cel’, which will be located inside the Àgora to “integrate and dialogue with the natural and organic ecosystem” created by the architect Enric Ruiz-Geli.

As the author has explained, it is an immaterial sculpture that takes advantage of sunlight and reproduces the optical phenomenon of the rainbow. The installation, located thirty meters high, will take advantage of the natural light that bathes the building through the skylight and will only be visible on days with direct sunlight, resembling a natural phenomenon. It will therefore depend on the hours of the day, the seasons of the year and even the position of the visitor.

Already abroad, Anna Talens -author born in Carcaixent and living in Berlin- will install her ‘Palafit’, a piece inspired by the agrarian architecture typical of the Valencian and Mediterranean aquatic ecosystems and that evokes the traditional shape of a barrack.

The work is conceived as “an agricultural temple” that reflects on the intermediate spaces between the city and nature, as well as the human scale of the sculpture itself with the large size of the Santiago Calatrava building. This particular palafito will be located on the ponds of water surrounding the AgoraSpecifically, in front of the bleachers behind the building, and Talens is still working on “an object that activates space” and is visible.

Álvaro Borrás, in his first appearance before the media after his appointment, he stressed “the international projection, the exultant youth and the undoubted talent” of both artists. Likewise, it has taken the opportunity to advance some details of the state of the works of the CaixaForum Valencia, which are currently in a degree of implementation of around 25 percent. Thus, the part that will house the administration facilities is taking shape.

Study design Cloud 9 It also includes two exhibition halls of 800 and 400 square meters, respectively, the “spectacular” suspended cloud, the auditorium and a restaurant with two floors (the highest with a garden dome).

Borrás has asserted that the CaixaForum de Valencia, which has an investment for its construction in charge of the “La Caixa” Foundation of 19 million euros, it will be “the most unique” of the nine existing – among other reasons because it will be the last and the most innovative – and has praised Ruiz-Geli’s “astute” architectural solution, which has managed to dialogue with a space with as much personality as the one created by Calatrava and, in addition, providing it with a usable area of ​​6,500 m2.

If the continents are “unique” in each city, the contents of the CaixaForum are “twins” and the exhibitions that are prepared each year rotate through the different cities for two or three years. Also in the case of Valencia it is estimated that there will be about six each season and two selections will coexist at the same time to try to satisfy different audiences.

Regarding the exhibitions that were announced before the irruption of the coronavirus for Valencia, including some fruit of an agreement with the British Museum, Elisa Durán and Álvaro Borrás have stressed that the agreements signed remain in force but the exhibition calendar will be reorganized because of the pandemic.

For its part, Francesc Colomer has been convinced that the opening of CaixaForum will be “a blessing” that will help improve the cultural positioning that Valencia already has and reinforce its tourism brand.

In this sense, Elisa Durán has pointed out that the Valencian center will have as its singularity its location in a tourist enclave, as is the City of Arts and Sciences, and has recognized that they are curious to know the public that will visit it.