Ana Velasco Vidal-Abarca: Down with arms 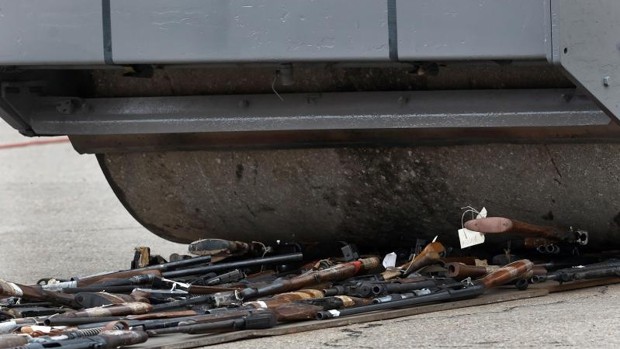 A steamroller has crushed the weapons seized from ETA over the years. They were weapons that the National Court guarded and that someone has decided that they are no longer necessary to investigate the gang’s 378 unsolved murders.

The Government has considered them much more useful for grotesque staging of a false victory over terrorism, of a definitive end, of a “goodbye to arms” based on lies and manipulation. The perverse intention of the representation in which the Prime Minister affirmed without a trace of shame that the destroyed weapons have been “handed over” by the vanquished, is an offense to intelligence. “Whoever surrenders arms accepts defeat,” he said.

But he knows perfectly well that no one has handed over their weapons, it has been the State Security Forces and Bodies that have taken them away from the terrorists with their daily work, their determination and commitment, risking his life and losing it on many occasions. With the interpretation that the Government has tried to give to such a propaganda act, several tremendously damaging effects are achieved.

On the one hand, the work of the State Security Forces and Bodies is despised, since the merit of dismantling terrorist groups and seizing their weapons is taken away from them; and on the other, implicitly, those who decide to “surrender” these weapons are praised as an act of “surrender” to contribute to “peace.” The problem is that none of that is true. The ETA terrorists have not surrenderedThe, what they have done has been to negotiate some unworthy counterparts in exchange for stopping killing. And these counterparts, those shameful cessions of the rule of law, are now evident: the legalization of the political arm of the gang, its legitimation and the removal of criminals from prisons that will culminate in the transfer of prison jurisdiction to the Basque Country .

And who knows if this destruction of weapons is not also serving to destroy evidence and thus ensure that the 378 ETA attacks that have not yet been tried are not resolved. Another of the perversities committed in the staging of the steamroller it was the equalization of all terrorisms. Although the vast majority of the weapons were from ETA and to a lesser extent, from Grapo. The president mentioned ETA, GAL, Grapo, Daesh and far-right organizations. It is clear that political murder, terrorism, is always unjustifiable, always.

But you cannot play along with those who pretend that all terrorism has been the same because it is not true. An organized gang that for fifty years has committed 3,000 attacks, murdered 864 people, caused 7,000 victims, threatened the entire society and seriously destabilized democracy, is not the same as the small groups that attacked ETA, who did not have a specific ideology. and that they had a much lower incidence than that of the band and its supporters in the field of Basque separatism. Nothing is further from my intention than to justify or excuse acts of State terrorism. Quite the opposite.

But it is not possible to fall into the trap – much less to set it – of minimizing what ETA has meant for Spanish society, nor can the many complicities that it has had and continues to have, nor its ability to continue trying to destroy the Nation from the institutions. The president – with all the intention – has lent himself to star in a “symbolic” act to convey to society the message that the terrorists have surrendered and have handed over their weapons in an act of generosity and compliance with the rule of law. “The defeat of the bullets against the votes,” he said. It sounds very nice. The only drawback is that it is a lie.

Ana Velasco Vidal-Abarca is the daughter of a soldier assassinated by ETA.