Arrested the skipper of the boat in which 14 people died 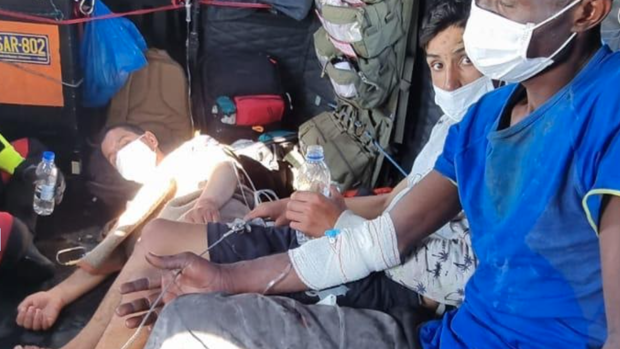 The agents of the National Police have arrested in Las Palmas de Gran Canaria a 43-year-old Moroccan man, as the alleged perpetrator of a crime favoring illegal immigration and reckless homicide when leading and coordinating the patera rescued by the freighter Ever Grace and in which 14 people died.

The arrested man is one of the skippers of a boat that was adrift at least two weeks at sea, being finally rescued by the Ever Grace freighter when at least 9 of its occupants had already died of hunger and thirst. During the rescue, 4 of them due to weather conditions fell into the sea, missing in the Atlantic. A woman died on the deck of the ship while waiting to be evacuated to the hospital.

It was about one mixed patera of sub-Saharan and Maghrebian that left at the end of July with 47 people destination to the Canary Islands. Prior to the trip, the immigrants spent up to three nights out in the open in the desert, with poor provision of water and food.

Since the dinghy left, as the agents have discovered after the investigation, two men took over the handling of the rudder and the two GPS positioning devices they had, taking turns between them to rest. On the third day of sailing, the gasoline ran out, the engine stopped and they were adrift on the high seas. In addition, one of the two GPS devices had failed so they were not sure about its real position.

The occupants of the boat passed two weeks at sea and from the same day they were adrift too the water and food ran out, so most immigrants began to drink sea water. In the following days people on board began to die, and their bodies were thrown into the ocean.

After 10 days at the mercy of the waves they were spotted by the ship mercante Ever Grace, who gave the warning, was in charge of rescuing them in a complex transfer where 4 people disappeared and of giving a first assistance to the survivors.

The police investigation revealed that one of the patrons passed away during the crossing while the other was in the Temporary Attention Center for Foreigners with the rest of the immigrants. After his identification and arrest, he was made available to the competent judicial authority, who decreed his entry into prison.

The research group has been able to identify several of the deceased and notify the facts to their relatives in Morocco.

Two patterns have been arrested in the last hours in a different investigation, where it has been possible to identify two men, ages 51 and 59, for an alleged crime of favoring illegal immigration.

The agents have verified that they are the alleged those in charge of skipping a boat rescued by the maritime rescue services on August 6, in which a total of 5 immigrants and transported between 25 and 30 bales of hashish. The boat, a zodiac type, would have remained at sea for about 7 days until they were finally rescued.