Boeing’s 737 MAX is coming back. But questions about lax oversight never left. 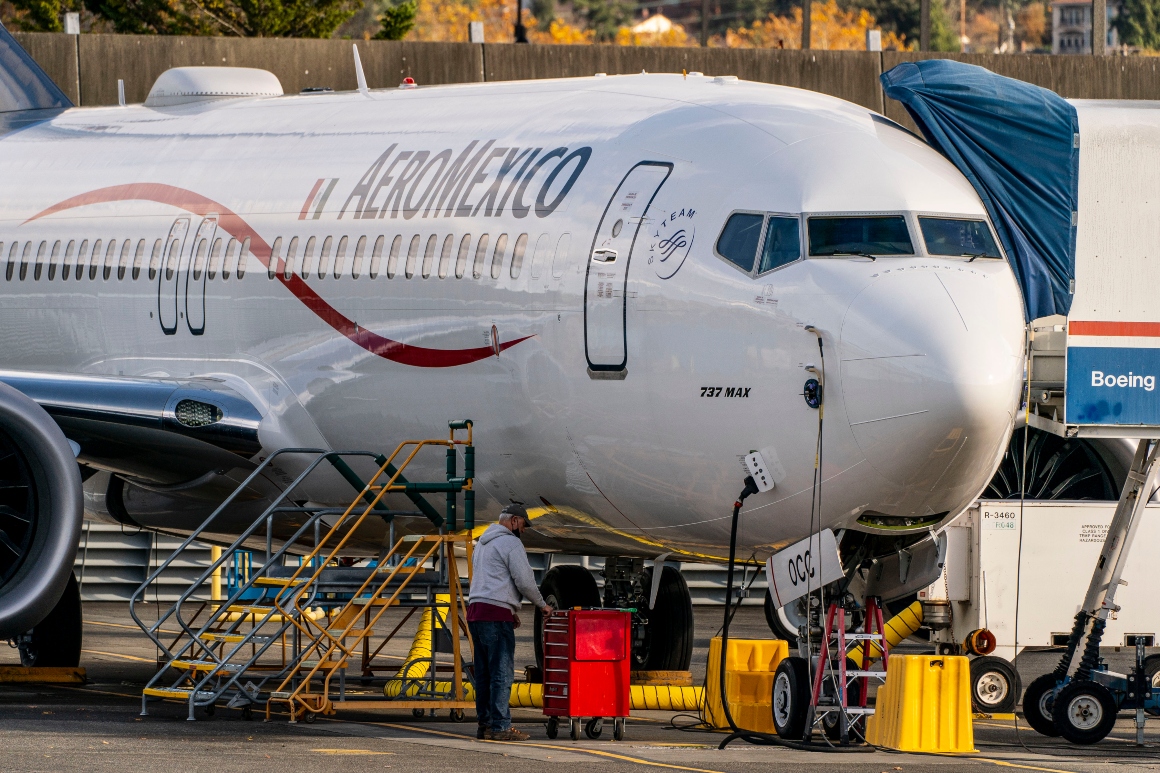 The friends and family of those who died on board have repeatedly criticized both Boeing and the FAA for being too lax with safety. On Tuesday Michael Stumo, whose daughter Samya died in one of the crashes, called on Congress to act on their bills in the lame duck to fix the aircraft certification system, “so FAA doesn’t just let Boeing self-certify” its planes.

The 737 MAX — intended to be a fuel-efficient competitor to a similar model from rival Airbus — has been grounded since the second crash occurred in March 2019 in Ethiopia, just five months after a notably similar disaster off the coast of Indonesia. In both cases, a new anti-stall software feature malfunctioned during the crucial moments after takeoff, overwhelming pilots who couldn’t troubleshoot the problem before plunging to earth.

Multiple probes have outlined safety gaps revealed by the crashes, including technical oversights in the plane’s design, Boeing personnel who sought to conceal information, allegations of lax FAA oversight, and a culture that allowed the plane to be certified with an anti-stall feature that the manufacturer and the agency did not inform pilots about.

Boeing commissioned a five-month independent review of its own policies and processes and has made several significant changes to its structure. Those include the establishment of a permanent Aerospace Safety Committee to oversee all aspects of product and service development, all the way to delivery and maintenance.

Other FAA orders in the last 20 months have required Boeing to correct previously undetected flaws unrelated to the crashes, such as those involving the MAX’s wiring and its lightning protection system.

But none of those changes touch the regulatory system that the FAA’s critics say lies at the heart of the crisis — one in which the agency allows manufacturers and their agency-approved designated employees to certify large swaths of a plane’s design as safe. In the case of the 737 MAX, that process, according to House Democrats, allowed Boeing to mislead the FAA about the development of the jet, failing to disclose major changes to an anti-stall feature for fear that costly pilot training would be required.

Congress has repeatedly enacted laws requiring the FAA to carry out the delegation system, known as the Organization Designation Authorization, expanding on a system that had been in place for decades in a smaller way. The FAA has insisted that this is the only way it can keep pace with the needs of manufacturers, while ensuring the aviation system is safe. The agency also has suggested that the FAA’s process for empowering Boeing employees to act in its stead is robust and multiplies the technical expertise being applied to scrutinizing designs.

But findings from some of the crash probes, especially one by House Democrats, suggest otherwise.

“I want to be very clear: 346 people died because the system failed,” House Transportation Chair Peter DeFazio (D-Ore.) said in January. “Despite the wishes of industry, it would be the height of irresponsibility to leave the ODA system as is and just hope for the best the next time. Not addressing the failures head-on would be a grave mistake.”

Both chambers of Congress have been working on bills to respond to the MAX disaster, including portions that look to strengthen the certification process and bolster FAA oversight. But they had largely lain fallow until this week. As the date for the MAX’s return neared, the House scheduled its bill for a vote on the floor, where it passed by voice vote, and the Senate Commerce Committee scheduled its bill for a vote in committee.

Despite those actions, it’s unlikely that a final bill can be enacted before the end of the year. And despite broad bipartisan support and many similarities between the two chambers’ bills, it’s even iffy for next year, when a likely still-divided Congress may be obsessed with combating the coronavirus and trying to pass another stimulus bill.

President-elect Joe Biden so far has not addressed the MAX crisis in any public venue, and most experts view the chances of the White House interceding to keep the planes from flying again is slim to none. In addition, the official overseeing the plane’s return to flight — Steve Dickson, the current FAA administrator — is serving a fixed term that won’t expire until July 2024.

Congress’ most recent major change to the ODA program came in 2018, as part of a law reauthorizing the agency. A provision written into that law directed the FAA to “fully” delegate certain functions to any manufacturer certified to participate in the program, unless the agency’s administrator makes a separate determination that doing so would harm safety.

It also directed the FAA to create a central ODA oversight office, intended to ensure that delegation authorities were applied uniformly across the country instead of having regional offices make those calls. Some in the aviation industry had criticized the regional approvals as inconsistent or too restrictive.

The FAA, which has long had a reputation as the “gold standard“ for aviation oversight, saw its credibility severely damaged immediately after the second crash, in part because the United States was one of the last governments on earth to ground the MAX after the second deadly crash. But that tarnish has faded as the world’s attention has turned to the global pain and unrest wrought by the coronavirus, along with a thorough attempt at troubleshooting the plane’s technical problems.

The dire scenario that appeared likely in the months immediately after the crashes — that governments in Europe, China and elsewhere would refuse to follow the FAA’s lead in declaring the plane safe to fly again — appears to have receded. Patrick Ky, the head of the European Union Aviation Safety Agency, said recently that he believed the planes will be safe to fly once Boeing’s FAA-approved fixes are made.

Jeff Guzzetti, an aviation safety consultant who served for years at FAA and the National Transportation Safety Board, which investigates air crashes, told POLITICO that he thinks “Covid-19 has taken a lot of pressure off the FAA and Boeing.” He added, “The fear of just flying in any kind of airline because of Covid overshadows the fear of flying in a jet that had a couple of accidents.”

In the end, Guzzetti said, the MAX’s return marks “closure” on “this long, sordid, unfortunate saga.”

Wednesday’s action means Boeing will be able to resume delivering planes to airlines, once they’ve made the changes required by FAA’s airworthiness directive.

But it won’t happen instantly. Airlines that already have the jets in their fleets need federal sign-off that they’ve made the required changes before they can begin flying the MAX again. Southwest Airlines, the largest U.S. operator of the MAX planes, said in October that “the MAX will likely remain out of the company’s published flight schedules until at least second quarter 2021.”

American Airlines plans to start easing the MAX into very limited service over the winter holidays and then evaluate. Passengers will be notified that they’ll be flying on a 737 MAX.

How we got here

Once the planes were grounded, a battery of probes commenced, from a DOT-chartered special panel to a criminal probe from the Justice Department. Many, but not all of them, have now concluded.

The crashes quickly focused scrutiny on a software feature, meant to prevent dangerous stalls, called the Maneuvering Characteristics Augmentation System. In both deadly crashes, investigators found that MCAS repeatedly pushed the plane’s nose down, triggering a cacophony of cockpit alerts that pilots struggled to sort out during the crucial moments just after takeoff.

The way the plane used MCAS was born in part due to Boeing’s desire to design the plane it in such a way that the FAA would certify the MAX as just a new variant of its long-time workhorse, the 737 passenger jet, rather than an entirely new aircraft. That way, pilots flying the MAX would not need to be retrained, helping the manufacturer compete with its European rival, Airbus. Boeing was so confident that it would be able to avoid retraining that it promised its airline customers a reimbursement of $1 million per plane should the FAA require retraining.

The result: Pilots got no specific training on the MCAS, which was supposed to function in the background as an unseen flight helper. That proved fatal when faulty sensor data incorrectly told the software that the plane was climbing at a dangerously steep angle, triggering a chain of events that caused the MCAS to plunge the aircraft into the earth while the pilots desperately tried to override the system.

In the immediate wake of the crashes, some — including top House Transportation Republican Sam Graves (R-Mo.), himself a pilot with a commercial rating — in part blamed poor pilot training by foreign airlines, contending that U.S. pilots are well-trained enough to have avoided crashing. But Boeing‘s own test pilot took more than 10 seconds to diagnose and respond to unexpected MCAS activation in a flight simulator, a fact that, according to a probe by House Democrats, Boeing had failed to disclose to the FAA and far longer than the four second assumption of how quickly an average pilot would react that underpins the design.

Since then, Boeing and expert review panels recommended simulator testing before the MAX’s return to service, a recommendation FAA heeded in its directive Wednesday.

Investigations revealed that Boeing engineers knew about problems with the MAX flight control system years before the crashes but didn’t let the FAA know. And, according to a scathing report from the House Transportation Committee, the FAA did not sufficiently scrutinize Boeing’s decisions, which were made in part based on old, outdated assumptions, according to another probe. The FAA essentially signed off on the safety of a system its own officials weren’t familiar with and didn’t understand.

Wednesday’s directive seeks to resolve the MCAS problem and implement a new pilot training regimen. And then the planes will take to the skies again.

The MAX’s return won’t necessarily improve Boeing’s financial outlook, which took a multibillion-dollar hit fom the mass grounding and is now suffering even more from the weight of the pandemic. Passenger traffic through U.S. airports is still less than a third of normal.

“It’s still going to take a while — months and years — for the tremors from this watershed accident to calm down,” Guzzetti said. “But they will calm down. And the airplane will eventually just become a workhorse, ordinary commercial airliner.”