Building of the School of Mines: who saw you and who sees you! 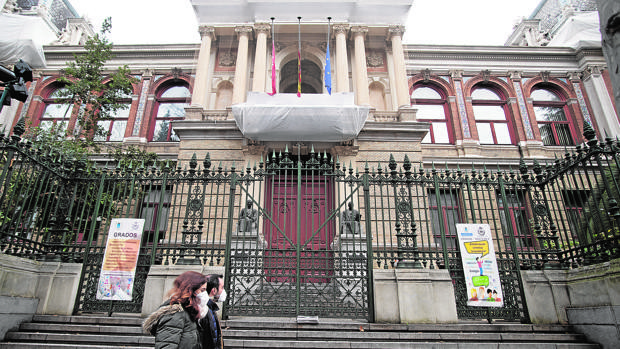 The magnificent building of the School of Mining and Energy Engineers, at number 21 Ríos Rosas street, is today a glaring example of the state’s decrepitude, incapable of maintaining in all its splendor the numerous and enviable material and historical heritage. immaterial that their centuries treasure. Built between 1884 and 1893 by Ricardo Velázquez Bosco, one of the great Spanish architects (Burgos, March 21, 1843-Madrid, July 31, 1923) and which had as students no less than Antonio Palacios Ramilo and Aníbal González Álvarez- Ossorio, the School of Mining Engineers is one of the four egregious buildings that Velázquez Bosco built in Madrid, together with the Palacio de Velázquez and the Palacio de Cristal, in the Retiro, and the Palacio de Fomento, today the Ministry of Agriculture, Fisheries and Food, in the Plaza del Emperador Carlos V. They all have that personal style and at the same time teamwork that he impressed on some works he raised with the collaboration of great craftsmen and artists: blacksmiths, carpenters, potters, painters and sculptors, who They decorated the interior and exterior of the building, harmoniously combining iron, wood, glass, stone, brick and bronze, until offering a beautiful and unique final image. The towers on the four corners were built at the beginning of the 20th century and shortly after, at the same time as the street named in 1880 in honor of Antonio de los Ríos y Rosas, Minister of the Interior and florid speaker, jurist and politician from Malaga ( Ronda, March 16, 1812-Madrid, November 3, 1873), the current fence that surrounds the School was placed, restored for the last time in the 1980s. Well, in a more lazy demonstration the beautiful School of Ingenieros de Minas is today a wounded building that has elements of its facades wrapped in acrylic mesh to prevent the detachment of cornices, capitals, gargoyles, metopes and other components from hurting students or passersby in their fall, and in the beautiful garden with palm trees that surrounds and separates this property from its adjoining one at number 23, which is also unique and in need of a facelift Geological and Mining Institute of Spain, there remain three work barracks that served years ago of classrooms while improvements were being made in the third building, the one dedicated to classes and company chairs, with a facade and entrance at number 32 of Cristóbal Bordiú, and which are now a warehouse, they disfigure the whole and cover the singular from Ríos Rosas street castle that belonged to the Mirador well, located at the mouth of the Marcelo Jorissen Experimental Mine, which was built in 1963 for educational purposes, after excavating and reproducing under the site a 50-meter gallery and an 18-meter coal mine shaft deep. The School plans to make access to the mine for the handicapped where the booths are, a propitious moment, hopefully it does not last forever, so that the eyesight disappear. The School of Mines had its origin in the Academy of Mines, founded in 1777 during the reign of Carlos III in Almadén (Ciudad Real). In 1835 it was moved to Madrid and went through various rental premises, until half a century later, in 1893, it was able to settle in its own headquarters in Ríos Rosas, 21, a street designed to connect Bravo Murillo with Paseo de la Castellana, in the Opposite side to the area called Altos del Hipódromo or Cerros del Viento, and later baptized by Juan Ramón Jiménez as Colina de los Chopos. Neither the Madrid City Council, competent in urban matters; Neither the School of Mining and Energy Engineers, with its head at the helm, nor the nonexistent Ministry of Universities, in charge of a nonsensical character, have done anything to remedy this unfortunate situation that affects two of the three most unique buildings that mark Ríos Rosas street, in addition to the Santa Coloma Palace, Consular Chancellery of the Italian Embassy in Madrid, built in the Ríos Rosas-Agustín de Betancourt- Cristóbal Bordiú-Modesto Lafuente block, which also houses the Italian Lyceum and auxiliary dependencies of the complex. The Walker in Cortes and millions of lovers of aesthetics and harmony will appreciate it.