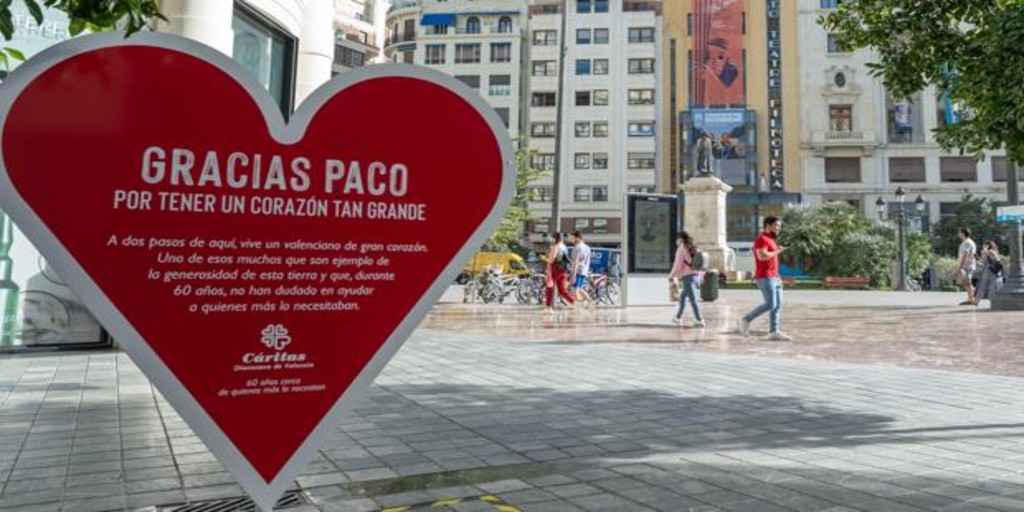 Diocesan Caritas de Valencia has presented this Thursday a campaign on the occasion of its sixtieth anniversary, whose first action, with the slogan “Thank you Valencia for having such a big heart”, has been the installation of as many hearts in the capital of Turia and nearby towns such as tribute to all the people who have collaborated with the entity.

The presentation was attended by the auxiliary bishop of Valencia, Arturo Ros, and the director of Cáritas Diocesana de Valencia, Ignacio Grande, who have discovered the heart installed in front of the entity’s headquarters located in Plaza Cisneros.

“Our gratitude to Valencian society is a commitment to work more and better for the common good, because although poverty grows, our permanent struggle for the dignity of people also increases,” stressed the auxiliary bishop.

These hearts that decorate emblematic places of Valencia «are a thanksgiving and symbolize where we are, where we want to be and where we should be: in the street, accompanying people and walking with the most needy, because the Church has to be a field hospital , As he says Papa», Has specified Arturo Ros.

Furthermore, «in this task, we want to be before, not to win over others, but to welcome those who need it, also in the new realities of poverty, in addictions, migration, children and adolescents, with all of them we are with a great disposition to work, welcome and accompany ”, he concluded.

“Volunteers are an example of dedication and commitment”

For his part, the director of Cáritas Diocesana has indicated that with this first action of “sowing” hearts in the street “we begin the acts of our sixtieth anniversary and we celebrate sixty years of being the caress of the church in the face of the weakest, and of being an orderly and organized service of the charity of the Church in Valencia ».

In the city and other nearby towns «there are already sixty hearts to thank the Valencian people for their support and to recognize the work of the volunteers, as a tribute; the one in Plaza Cisneros is the generic heart for all of society and the rest are inscribed with the names of volunteers and are located near the place where they live.

Cáritas Diocesana has “more than 6,000 volunteers, who are an authentic example of dedication and commitment in times as complicated as those we live in: we do what we do and we get where we are thanks to the generosity of the people who collaborate with us, to through volunteering, which is the key to our ecclesial reality, and also through financial contributions and gestures of solidarity.

Over sixty years «we have lived through very difficult moments, such as the current economic crisis derived from the health sector due to the pandemic of the coronavirus, but also moments of hope and generosity “, according to Grande, who recalled that” recovery from crises is slow and precarious “and therefore” public administrations must work for the common good and collaborate with entities dedicated to the field. charitable and social, with a fluid dialogue and joint work.

As future challenges for Diocesan Caritas, its director has cited “to continue working to promote the person, defend the dignity of every person in all its dimensions, raise awareness, connect with youth, strengthen parish Caritas, train and accompany volunteers, and fight for access of people to their rights, especially to decent housing and employment ”.

In the last fiscal year of 2020, Cáritas Diocesana de Valencia It served more than 60,000 people in the Valentina diocese and estimates that in Valencian society about thirty percent of the people live in a situation of exclusion.

Cáritas Diocesana has scheduled other events on the occasion of its sixtieth anniversary. Thus, next Tuesday, October 26, the official date of the entity’s constitution decree, the institutional act of tribute to its volunteer work will take place, in the assembly hall of the Bancaja Foundation, in which “will be entertained, in a special way to the management teams of the institution in recent years,” they indicate from the institution.

Likewise, on October 29, the entity will celebrate an “act of recognition to the Valencian business fabric for its support especially during the pandemic”, a day that will take place in the Auditorium of the CEU University – Cardinal Herrera.

Finally, the institution’s volunteers will meet in a simultaneous meeting that will be held in eight different places in the city. Diocese on November 6 and in the traditional Christmas Eucharist, on December 18, which will take place in the Cathedral and will be presided over by the Cardinal Archbishop of Valencia, Antonio Cañizares.

Similarly, there are other activities scheduled for 2022, such as the talk given by the former Secretary General of Caritas Espanola, the sociologist Sebastián Mora Rosado, on January 19; a round table (March 3) and a photographic exhibition, scheduled for May.