Carlos Herrera, awarded an honorary doctorate by the European University 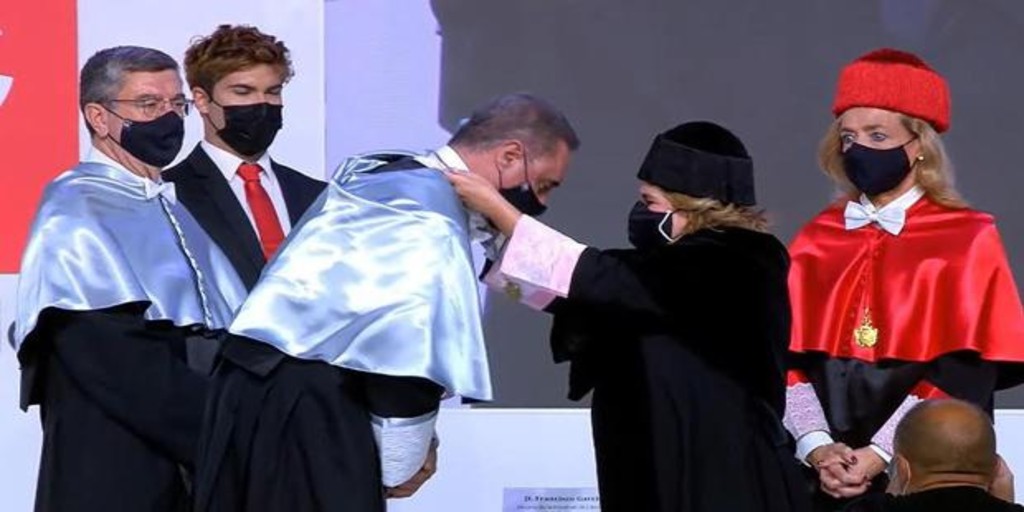 The director of ‘Herrera en Cope’, Carlos Herrera, was this Thursday doctor honoris causa from the European University. The entity recognizes “his professional career, his contribution to society through journalism, as well as his commitment to constitutional values.” This honorary title makes him a member of the faculty and a benchmark for young students. Carlos Herrera has been very grateful for the title, but also humble: “Giving me a doctorate is, as my opponents would say, giving an orangutan a violin.” “I plan to go through the center of Seville with my head held high giving ‘fringes’. Hopefully I’ll take it off to sleep, ”he said proudly.

«I was born for medicine, but degenerated for journalism. For the radio. After many years, I have managed to be a regular but happy journalist. This is how Carlos Herrera started his speech after being awarded an honorary doctorate by the European University. Herrera wanted to warn of the danger of “getting used to the lack of analysis in current journalism.”

For the leading radio communicator in Spain, “journalism is not an absolute truth. It is an approach to the facts to be able to tell the citizens with a respectful version, always bearing in mind that journalists are not perfect, but we must be honest, “he said. “Me I was a kid with one ear glued to the radio. I would sit in his room to listen to that person who summed up the entire universe. When I was the one who spoke, I did it for a person in his or her loneliness “, said Herrera during his speech.

The distinction is granted through the Faculty of Social Sciences and Communication and highlights the figure of Carlos Herrera as the best valued journalist on radio in Spain, the most influential, the one with the greatest credibility and who offers every morning to 2,600,000 listeners truthful, contrasted and plural information. Herrera has been able to transform morning radio for the last 40 years and be present on different analog and digital platforms.

The distinction is added to the many received by the communicator throughout his more than 40 years of experience in radio, press and television, among them the King of Spain Ibero-American Journalism Award, the Mariano de Cavia Award, El Salvador de Madariaga, the Eisenhower Award for his commitment to defense and freedom of expression or the six Ondas awards. Although Herrera (Cuevas del Almanzora, Almería, 1957) has a degree in Medicine, he has always dedicated himself to communication. Radio Sevilla, in 1977, was the first stop in a long professional career. Catalonia was a fundamental place in his professional beginnings.

Both on Radio Mataró and on Radio Miramar in Barcelona, ​​where he replaced another legend with capital letters on Spanish radio: Luis del Olmo. In Barcelona it coincided with another historic COPE, Encarna Sánchez. The SER, in 1990, hosted Herrera’s first major radio program nationwide, Coplas de mi ser. Later, his initial stage in COPE would arrive, where he presented La Mañana. It would also go through Canal Sur Radio, RNE and Onda Cero.

The honorary doctorate investiture ceremony was held at 12 noon on the Villaviciosa de Odón campus. Before and from 6 in the morning, Carlos Herrera directed a special edition of Herrera at COPE from the university auditorium with very special guests. Among them, Iñaki Gabilondo. The two communicators chatted about the radio and the future of journalism with students. For Gabilondo, «Herrera is gifted. He was born with a special gift for communication ». Herrera did not hide during the conversation that “a good part of what I know, I have learned from Iñaki. It is serenity. From today, Carlos Herrera and Iñaki Gabilondo join the list of honorary doctorates from the European University. They are part of history along with Nelson Mandela, Valentín Fuster, Antonio Garrigues Walker, Rafael Nadal or Rebeca Grynspan.