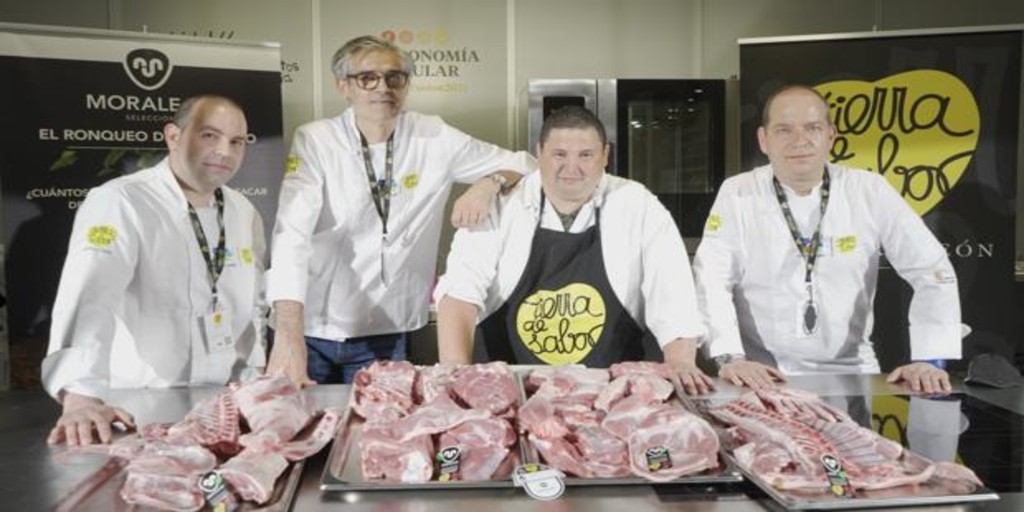 The Madrid Fusión gastronomic fair has begun in Ifema today, Monday, May 31 and will run until this Wednesday, June 2. The Autonomous Community has not wanted to miss the occasion, with several proposals that include live elaborations, tastings and a large number of companies from the region. What’s more, Tierra de Sabor has surprised especially today with ‘El ronqueo del cordero’, in a presentation directed by chefs Antonio Jesús González de las Heras, Mario Oliveira Moralejo and Roberto Calzado. In it, the versatility of this product has been put on the table with innovative cuts and elaborations, collects Ical.

The idea for this presentation arose from the Japanese technique of tuna snoring, which is increasingly common on the southern coasts of Spain. All the fish is divided into parts and a multitude of different cuts are taken, with different uses in the kitchen. “In a clear example of innovation, the same technique has been put into practice with lamb,” explained the Board. The quality seal of Castilla y León will also carry out a tasting during the second day, at 10:30 am, directed by Pedro Ballesteros.

“Salamanca cuisine is at the best moment in its history and it shows: our stand is the most requested and valued,” said the Councilor for Tourism, Fernando Castaño, in statements to Ical. On the one hand and, from the hands of the producers themselves, Different tastings will be scheduled with some of the most emblematic elaborations of the province: cheeses, veal, sausages, oils or pastries. On the other hand, the chefs of the province will come together to offer a joint program.

While, León is confident regarding the commitment of his space: he knows that 72% of his visitors have gastronomy among their motivations of your trip, thanks to the information collected by your Tourist Office. In addition, the degree of satisfaction of travelers with the quality of the food in León has been valued with a score of 7.95; and for example, aspects such as facilities or attention obtain an average of 7.50. Gastronomy, as a whole, on a scale of one to ten, achieves an impressive 9.28 on average.

Will also be present the Burgos Alimenta quality brand, which will double the space of its exhibitor at the International Gastronomy Summit. This will take the Burgos chefs Antonio Arrabal and Fidel López, who will present the cheese of the province on Tuesday, June 1 at 2:30 p.m. In this stand there will be up to twenty companies during this edition, among which there are names from the entire food arch, such as Dominio Basconcillos, Bodegas Palacio de Lerma, Morcillas La Ribera, Destilería Reino de Castilla or Legumbres Collalb @ s.

Eleven restaurants will pass through the Valladolid booth to prepare their recipes live during the three days that the contest lasts. This Monday, the Suite 22 restaurants and asparagus guarantee brand from Tudela de Duero, Don Bacalao, Llantén and Maryobelli (Cogeces del Monte) have already inaugurated the rotation. On Tuesday it will be the turn of Los Zagales, again Suite 22 and Mélida Winea (Mélida). On the last day, the Still Life El Ciervo (Cabezón de Pisuerga) will be accompanied by the Prizes of the Provincial Pinchos Contest -La Dama de la Motilla (Fuensaldaña), Buena Brasa (Zaratan) and La Malquerida- and of the Association of Hospitality Entrepreneurs of Valladolid. They are . This same day the presentation of the sweet ‘Valadar’ will take place, with the Association of Confectioners of Valladolid. The Ambivium restaurant, recently awarded a Michelin star, will also give a presentation.

Soria will provide the presence of Elena Lucas, from La Lobita Restaurant, in Navaleno, with a Michelin star. The cook gave a presentation this Monday, and although sanitary measures prevent tastings from being carried out, among the Soria food companies present are typical sweets el Beato, Mykes Gourmet, Espora Gourmet and the Association of torrezno manufacturers. On Tuesday the companies Cañada Real, Gourosma, Facuven Wild Products and Arotz will join. And on Wednesday the space of the Provincial Council will be for Canard, Industrias Cárnicas Villar, Trufbox innovation and Cárnicas Sierra de Toranzo.