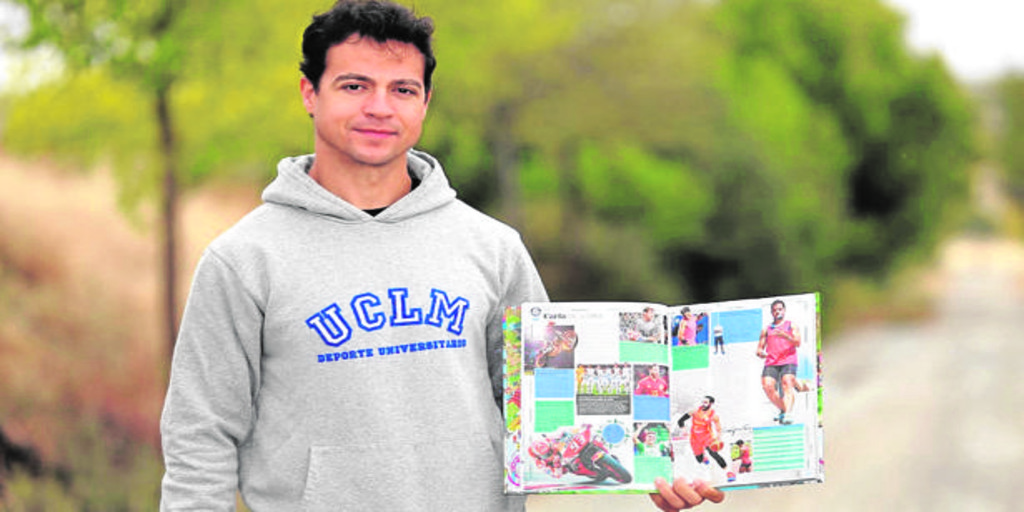 Christian López (Cabañas de la Sagra, 1988) has just broken the world record for climbing steps with crutches and supporting only one leg. In one hour it reached 107 floors. Now, in November, he intends to break the 1,000-meter record also with crutches. You will have to do it in less than six minutes and 23 seconds. He sees it as possible, since he has already achieved the one for the mile (1,609 meters). Christian is not missing a leg, it is that he has plenty of everything: athletic ability, skill, restlessness, curiosity, tenacity, perseverance, motivation and solidarity. His name appears 73 times in the Guinness World Records, more than any other Spanish and only surpassed by five people in the world. The leader is the 67-year-old American Ashrita Furman, who has already broken 600 records. Christian, for the moment, is convinced that next year he will pass 100. “It’s not just appearing in the book, it’s the satisfaction that comes from being the best at something,” he acknowledges about this addiction (not yet) recognized in Guinness.

His life can only be told step by step, challenge by challenge, record by record. Doctor in Sports Sciences from the University of Castilla-La Mancha (UCLM), he earns his bread as paddle tennis monitor, personal trainer and motivational coach. “I love giving inspirational lectures to people to help them achieve their goals,” he explains. He has also published a book, entitled ‘You are what you overcome’. For seven years, he competed on the world towerrunning circuit; that is, the rise of skyscrapers. There are people who go to London, Frankfurt or Rotterdam for tourism and there are people, like this man from Toledo, who would suffer climbing stairs. “When you already have a number of plants, you go into an agonizing state. It’s really beating yourself up, ”he says.

Tired of traveling in Europe, he thought “of doing something different.” He found the answer in that Guinness World Records that the Magi bring him every year. In November 2017 he managed to be the protagonist for the first time by climbing 41 times the southwest tower of the Alcazar of Toledo. In total, 6,765 steps in one hour. On the way down, to catch air, I used the elevator. Since then, Christian is “The Colossus of the Alcazar”, according to the nickname of Manuel Moreno, a colleague of ABC.

Aside from undeniable athletic power, he likes to “discover hidden talents.” One day, on a birthday, “I saw a broomstick and I started to hold it up to my nose. That’s when I realized that I could hit quite a few balance records. ” One of the most impressive has been to hold a bicycle with your chin. It lasted nine minutes and 41 seconds. “It took me two years of practice, three days a week, until it finally came out,” he recalls. It also does’retrorrunning‘, that is, run backwards. And so, with diving fins on his feet, he has traveled 50 meters faster than anyone.

Christian is fond of Playmobil, of which more than 12,000 accumulates at home, And his story wouldn’t be complete without mentioning the accompanying type 1 diabetes. «When I was diagnosed with 12 years, my conception of life changed. I began to mature much earlier and to try to put myself in the place of the other person, “he explains. This helps to understand why on October 16 he acted as Paco Pérez’s squire, a Murcian who has cerebral palsy, so that he could complete the eight kilometers of ‘La Nocturna’ in Toledo. “It was very, very emotional. It was the most special race », he sums up. And he did not break any records, that is known. But he deserved it.