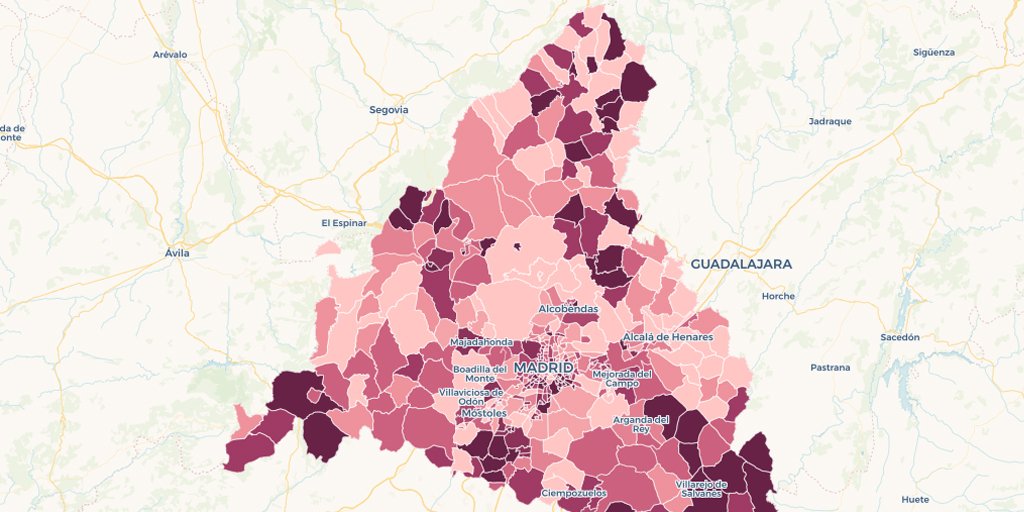 The basic health area of ​​Peña Prieta, in the Puente de Vallecas district, has been, with 2,255 confirmed cases of Covid-19, the most affected by the disease in relation to its population since the beginning of the pandemic. According to the data offered by the Sandidad department of the Community of Madrid, its registry amounts to 13.7 cases of coronavirus per 100 inhabitants. Behind, very close both in the data and geographically, is the basic area of ​​Pozo del Tío Raimundo, in the same district and with 967 confirmed cases from the beginning, which accumulates an incidence of 13.44 cases per 100 inhabitants.

The third position is occupied by the basic area of ​​Sierra de Guadarrama, in Collado Villalba, which with 2012 confirmed coronavirus cases, has 13.22% of its population have passed the disease. This is followed by Reyes Católicos (in San Sebastián de los Reyes) and Chopera (Alcobendas) with an incidence of more than 12.9 cases per 100 inhabitants.

Likewise, in absolute terms, the basic health area that has had the most coronavirus infections has been Goya, in the Salamanca-Retiro district, which since the beginning has reported a total of 4,993 cases, which represents an incidence 8.39 cases per 100 inhabitants.

At the opposite extreme, are the health areas where the cases detected in relation to their population have been the lowest in the entire community, this is the case of the Embarlaciones Sector area, in Tres Cantos, where with 1541 confirmed positives, the The percentage of inhabitants who would have had the disease is 5.41.

Behind, Valdemorillo, which with 703 positives has a total cumulative incidence of 5.62 per 100 and Virgen del Val, in Alcalá de Henares (which in total has reported 797 cases, which represents an incidence of 5.64 for each 100).

Likewise, in absolute terms, the areas that would have registered fewer cases are El Pardo, in the Fuencarral-El Pardo district, with 195 cases confirmed since the beginning, and Las Matas, in Las Rozas, with 442 cases.

The number of infections is currently in decline in the Community of Madrid, which on Friday had a cumulative incidence of cases of 245 per 100,000 inhabitants.

This reduction in the number of infections has led the counseling to maintain the confinement of only 15 basic health areas (indicated in red on the following map).

Of course, for now and until March 14, the prohibition of meetings of non-cohabitants in homes is maintained throughout the region, except in the case of care for third parties (elderly, dependents, minors or vulnerable people ). Also, the curfew is maintained between 11:00 p.m. until 6:00 a.m.