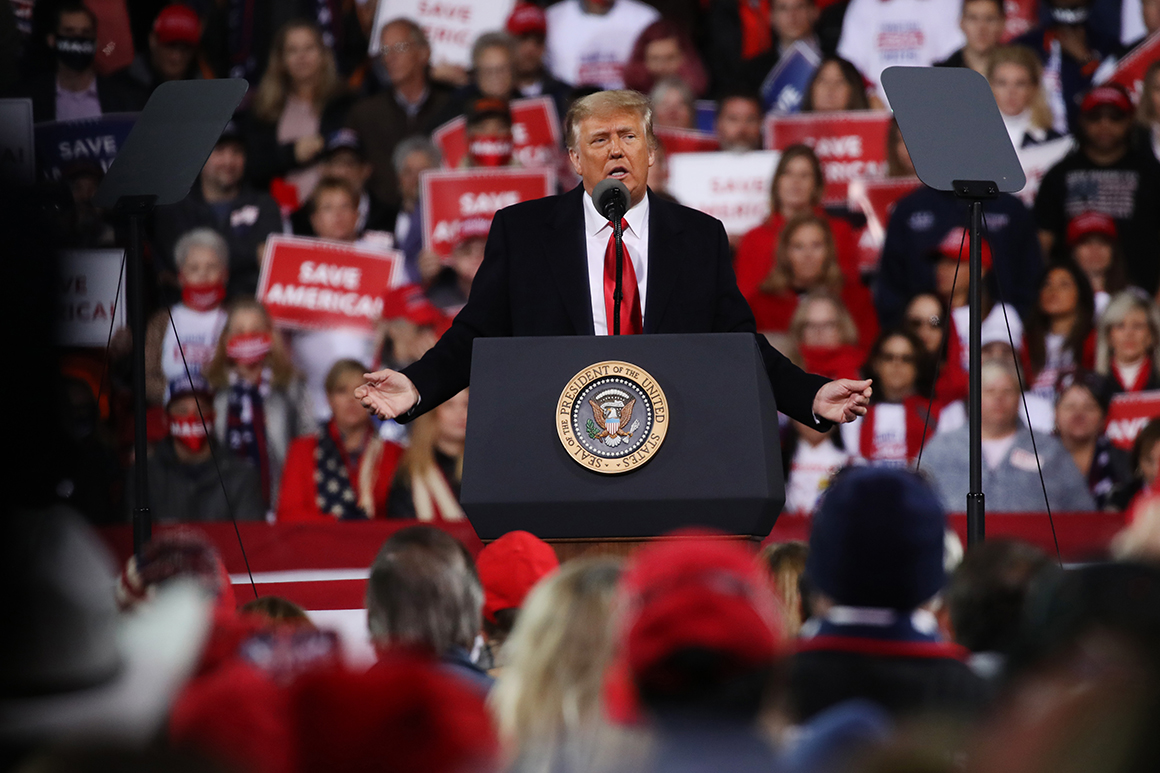 But while Trump encouraged Georgia Republicans to turn out on Jan. 5, he continued to play up his disproven claims of a “rigged” election. Still, he admitted — briefly — that he’d lost the election to Joe Biden before quickly correcting himself.

“Let me tell you this election was rigged and we can’t let it happen to two of the greatest most respected people in Washington,” Trump said about Loeffler and Perdue amid chants of “Stop the steal” from the crowd. The Democrats “cheated and they rigged our presidential election. But we will still win it.”

With control of the Senate on the line, Republicans — as well as Trump — face a now-arduous task of turning out GOP voters who have placed their trust in the president and are wary of voting in an election that they consider rigged against them.

Pro-Trump trial lawyer Lin Wood has stoked the fears of voting fraud among Georgia conservatives, urging them to boycott the runoff elections and accusing Republican Secretary of State Brad Raffensperger of being on China’s payroll and “aiding & abetting foreign interference in our national election.”

“We do NOT need to vote for @KLoeffler & @sendavidperdue in rigged runoff to control Senate,” Wood tweeted on Saturday to his nearly 730,000 followers after being told by Trump to “knock it off.”

Trump encouraged his supporters to put their grievances aside and vote.

“Friends of mine say we are not going to vote because we are angry about the presidential election,” Trump said. “Don’t listen to my friends.”

Republican National Committee Chair Ronna McDaniel had to push back against the claims of voter fraud last week after a voter in the Atlanta suburb of Marietta, Ga., a former conservative stronghold in the rapidly changing state, claimed the pair of Senate runoffs had already been “decided.”

“It’s not decided. This is the key—it’s not decided,” McDaniel told a room of Trump supporters. “So if you lose your faith and you don’t vote and people walk away—that will decide it.”

Numerous Georgia Republicans, including former House Speaker Newt Gingrich, have urged voters to turn out on Jan. 5, fearing posts by Wood and others could hurt their chances at holding onto the pair of pivotal seats that will determine which party controls the Senate.

“Every Georgia conservative who cares about America MUST vote in the runoff,” Gingrich tweeted on Thursday. “Their dont vote strategy will cripple America.”

Fire has flown from the president’s fingertips on Twitter in recent weeks, as he launched sustained attacks on Georgia’s top Republicans. Trump has made former ally Gov. Brian Kemp a frequent punching bag and called Raffensperger an “enemy of the people.” This week, Raffensperger said he and his family have faced threats from Trump’s supporters.

Kemp, who didn’t attend Saturday’s rally, pushed back against Trump earlier in the day after the president demanded the governor conduct a signature audit of the state’s election results.

Trump continued his attacks on Georgia Republican officials, claiming Kemp and Raffensperger were “afraid of Stacey Abrams,” the former Georgia gubernatorial candidate who won praise for her organizing that helped turn Georgia blue for the first time since 1992.

Then Trump fired one last shot at Kemp, who is up for reelection in 2022.

He pointed to Rep. Doug Collings (R-Ga.), who was in attendance.

“I want to thank Doug Collins,” Trump said. “What a job he does. Thank you. Doug. You want to run for governor in two years?