Garrocha, the most volcanic area in Spain, has no eruption plan

The La Garrocha volcanic field It is considered, together with the Canary Islands, a volcanically active area and has been contemplated by the Official State Gazette (BOE) since 2013. That it is legally considered an active area, explains Xavier de Bolós, a doctor in Geology born in the region and to whom the The study of volcanoes has led him to the Institute of Geophysics of the National Autonomous University of Mexico, from where he attends ABC, «it means that there are basic guidelines and an order for an eventual crisis situation like the one that is being experienced today on La Palma ». The Generalitat, however, does not have any specific action protocol in the event of a volcanic eruption or explosion. Government sources tell ABC that the Executive has plans for more probable risks, such as fires, storms, earthquakes, floods or landslides, but not for volcanic risk.

Thus, images of lava engulfing everything it finds in their wake that these days have impacted the Spaniards could be seen far from the Canary Islands, in Gerona specifically. Although it is generally ignored, in Spain there are about a hundred volcanoes and those of the Canary Islands, which are the most popular, only account for almost half of them. The other great volcanic zone in our country It is located in the Catalan region of La Garrocha (Gerona), among whose neighbors the uncertainty has been awakened by living next to these apparently sleeping giants. 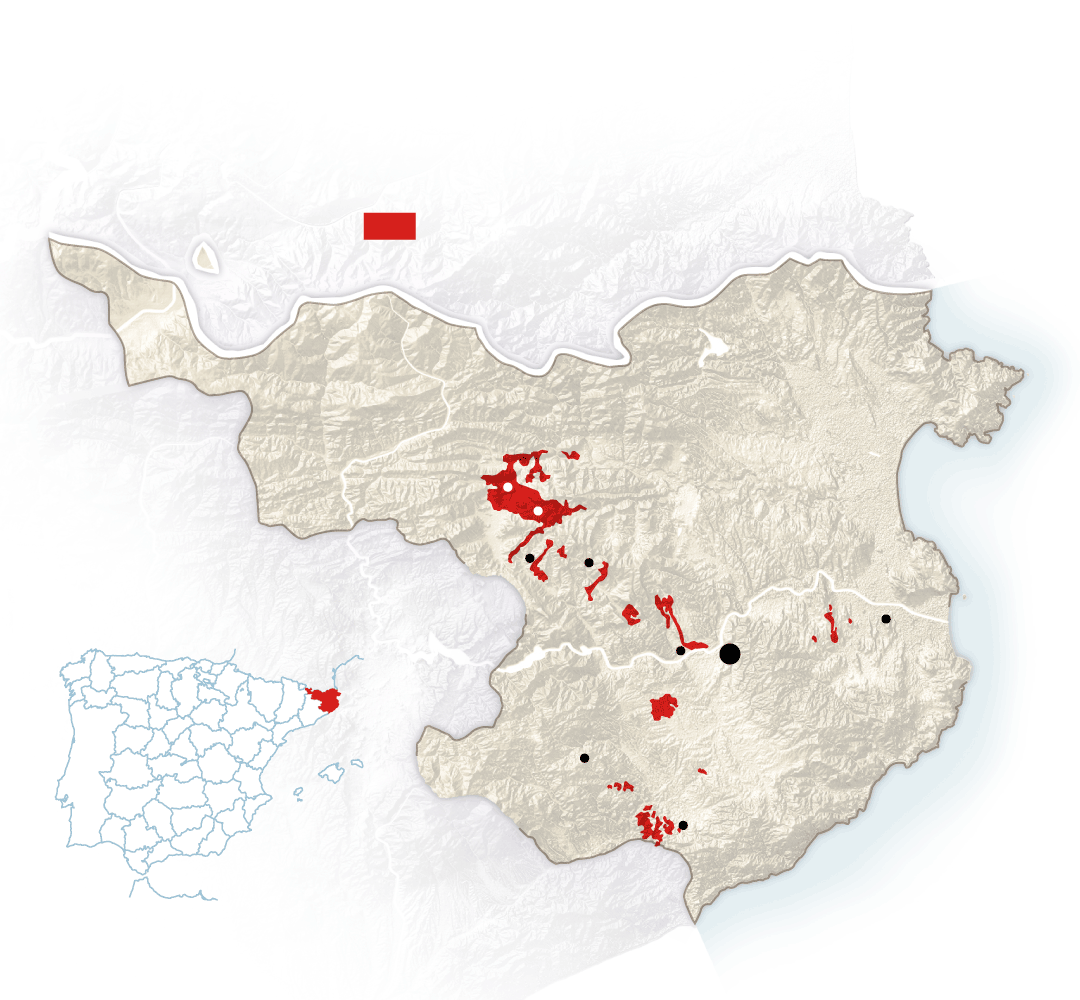 «It is the topic of conversation these days in the bars and streets of the town. Until now the volcanoes were here, but it was as if we ignored them “, explains to ABC a neighbor of Santa Pau, a municipality surrounded by craters and volcanic cones and one of the most iconic villages in Catalonia for its medieval charm. Located in the north of the province of Gerona, the Garrocha Volcanic Zone Natural Park encompasses some 15,000 hectares of some 40 active but dormant volcanoes, with spectacular lava flows and a lunar landscape worthy of a science fiction film. that stand out geologically for their good state of conservation. Santa Pau has thirteen of them on its land.

What would you do if it happened?

Its mayor, Josep Companys, confirms that the eruptions so far were not a cause for concern. «We are aware that we live in a risk zone and that these volcanoes are asleep, but you watch television and the appalling situation on La Palma and you put yourself in the shoes of their neighbors … We have been thinking for days what should we do and how to act if this happened here, “he says in a telephone conversation. Companys emphasizes that in his municipality there are also a couple of urbanizations, scattered nuclei and somewhat more isolated constructions on the slopes of volcanoes that would probably be swallowed up by a river of lava.

Álex Pérez has a family home in La Vall d’en Bas, near the natural park, and he recognizes, laughing, that the Garrocha volcanoes they have always been a reason to joke with friends, but little else. “It would be bad luck for us to have an eruption,” he ironizes while acknowledging that he lives in ‘shock’ what is happening in the Canaries. Obviously, he remarks, he has never thought of selling the house. “Volcanoes have always been here,” he insists.

Experts in geology and volcanology take it for granted that an eruption in La Garrocha would have effects similar to those experienced these days on La Palma. The Cumbre Vieja has the same characteristics as the Girona volcanoes, which is why these days the question is strongly emerging as to whether an eruption similar to that of these days on La Palma. “Yes, it could happen”, responds bluntly to ABC Pura Alfonso, professor in the Department of Mining, Industrial and ICT Engineering at the Polytechnic University of Catalonia in Manresa (Barcelona).

The professor, with high knowledge about the morphology of La Garrocha, recalls that the last eruption there occurred between 10,000 and 13,000 years ago, a figure that varies according to the authors. It was that of Croscat, a strombolian-type volcano that has a horseshoe shape because of the river of lava that it left in its last eruption and on whose pouring the Fageda d’en Jordà was born, the only beech forest in Catalonia and the great non-volcanic attraction from the park. Although the dating of phenomena from the Quaternary period is not easy, it is estimated that eruptive episodes have occurred in the area every 15,000 years. “Nature is not mathematical but it is believed that until about 2,000 years have passed another eruption is unlikely,” he says.

De Bolós is in the same line. “The Garrocha volcanic field is considered active due to the geologically recent age of its volcanism and the geological conditions it presents.” The area, Bolós says, has a recurrence of eruptions of between 5,000 to 20,000 years and, taking into account that geological conditions have not changed since the last eruption, “it is expected that sooner or later an eruption will occur in a volcano in this area.” However, the volcanologist tries to calm any fear: “That does not mean that an imminent volcanic crisis is expected in the area, but you have to be prepared.”

Alfonso details that the lava of some hypothetical eruption here “it could travel considerable distances” because the magma in the area is of higher density and, therefore, less viscous and more fluid. De Bolós emphasizes that despite the similarity between La Palma and La Garrocha, «here the eruptions could present a greater explosiveness, generating violent strombolian-type eruptions, with dispersion of fine ash and eruptive columns up to eight kilometers high. This is due to the contact of the magma that rises with shallow aquifers ».

With the volcano as a neighbor

What seems inevitable is that, occur a volcanic phenomenonThis could affect populated areas, as is happening these days in La Palma. In fact, in La Garrocha objects have been found among the lava that corroborate that there were settlers where the lunar landscape now reigns. The natural park reaches eleven municipalities -with 40,000 inhabitants-, which would inevitably be affected by a hypothetical eruption.

Olot, the capital of the region, it has almost 35,000 neighbors and four volcanoes, literally urban. The Montsacopa, perhaps the most iconic, is in the heart of the municipality: its crater can be visited, converted into a viewpoint with almost 360-degree views and it also houses a restaurant. “We feel the volcanoes as very ours but these days they arouse us a bit more curiosity than usual,” says Àngels, a neighbor who usually walks along this route and who works in the tourism sector. The area lives largely on the reception of visitors curious about the volcanoes and these days they begin to notice more telephone inquiries. Like the natural park reinterpretation center, which is receiving more calls. Of course, for the coming weekends they predict a “boom” of visitors attracted by the beautiful autumn that is experienced annually in the area and especially by the curiosity aroused by the Cumbre Vieja.