Hell week bears down on Congress 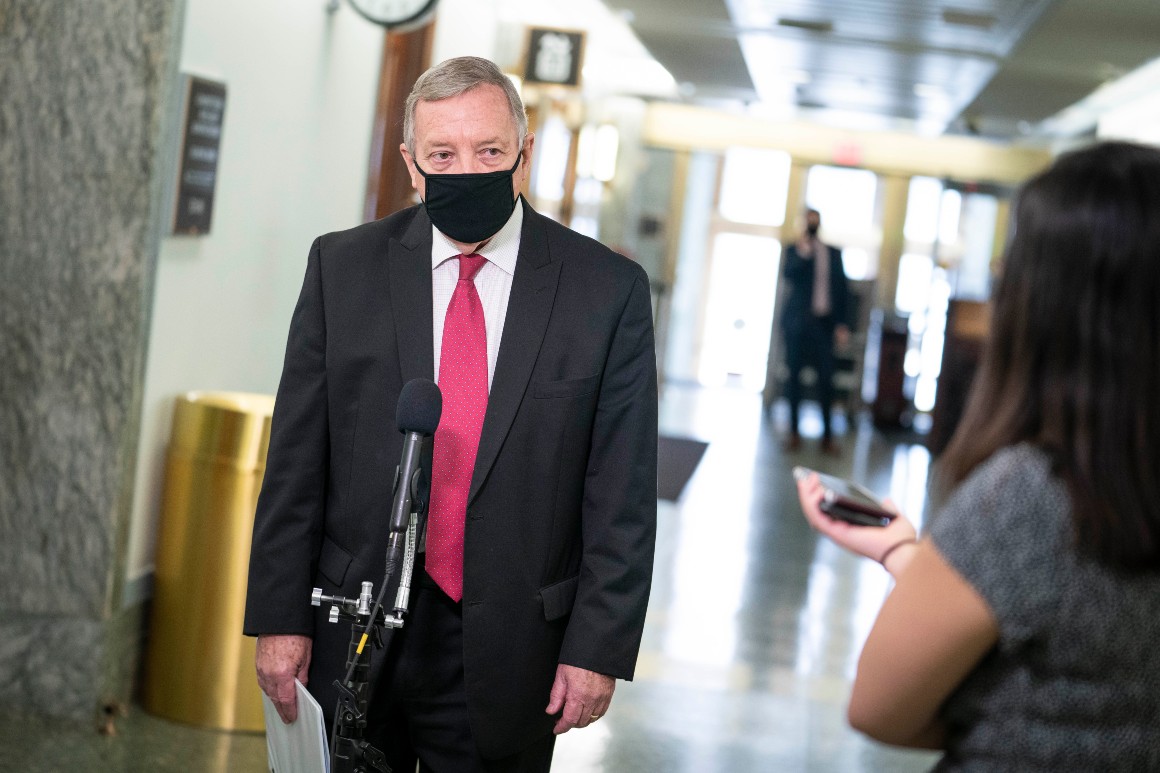 Perhaps most urgent as the United States racks up roughly 200,000 cases and 2,000 coronavirus deaths a day — the country registered a million new cases in the first five days of December — is some new response to the disease’s devastating health and economic effects. Bipartisan negotiators worked throughout the weekend to finalize $908 billion legislation based on their rough framework from last week, with hopes of introducing bill text early this week. Congress has not approved a major aid package since April.

“We have a lot of work to do. And just a few days to do it,” said Senate Minority Whip Dick Durbin (D-Ill.) on ABC’s “This Week” on Sunday morning. “It really is a superhuman effort on our part to get this together in time to help the American people as quickly as possible.”

But there’s questions over whether congressional leaders will accept it given disagreements over how much to spend, where to spend it and whether to offer businesses new legal protections. Some sources were doubtful this weekend that the furious round of deal-making would create a new law despite optimistic words from Speaker Nancy Pelosi and Senate Majority Leader Mitch McConnell.

Democrats say this bill is the starting point for negotiations, McConnell has been noncommittal and President Donald Trump is always a question mark. Proponents of the bipartisan framework say their effort is the only game in town.

“President Trump has indicated that he will sign a $908 billion package. There’s only one $908 billion package out there, and it’s ours,” said Sen. Bill Cassidy (R-La.) on “Fox News Sunday” of the bill’s prospects with McConnell and Trump. “The pain of the American people is driving this, and I’m optimistic both of those leaders will come on board.”

Sen. Joe Manchin (D-W.Va.), who has helped lead the negotiations, said on NBC’s “Meet the Press” that “a deal that must come together. We don’t have a choice now.” He argued spending $908 billion now will have a more important impact than waiting to do something larger until President-elect Joe Biden is sworn in.

Still, disagreements persist over aid to local governments, a must-have item for Democrats that divides Republicans, and a liability shield for businesses that McConnell has called his red line but is something Democrats loath. Failure to cut a deal would hamstring Biden during his first days in office as the health and economic calamities worsen absent relief.

If Republicans and Democrats can come to an agreement, it would likely have to be included in the year-end spending bill. If the larger negotiations fail, it’s also possible a handful of expiring provisions could be tucked into the must-pass spending package, like extending unemployment funding and an eviction moratorium. But transit agencies, airlines, unemployed Americans and cash-strapped states could be left out of a small ball agreement like that.

And even funding the government has become a question mark. Congress now needs to pass a short-term spending bill to give negotiators more time past the Friday deadline, in part because it can take the Senate several days to pass a spending bill if any individual senator fights swift passage.

The Senate is targeting roughly Dec. 18 as its adjournment date, and McConnell is still looking to confirm nominees this week. The omnibus negotiations that would fund the government through September are still not finished and could collapse — and only produce a stopgap bill into the early days of Biden’s presidency.

Even the fate of the ever-popular National Defense Authorization Act looks rocky. On Tuesday, the House plans to pass the final version of the NDAA, which Trump opposes because it doesn’t repeal Section 230, or protections for tech companies, but does rename bases named for Confederate leaders. Some Republicans supportive of Trump’s effort on Section 230 say it simply can’t go in the defense bill and are ignoring his demands to jam it in the defense legislation.

House Majority Leader Steny Hoyer (D-Md.) has predicted the chamber has the votes to override the president’s veto, though such a scenario is not ideal for Republicans. Congress has not overridden any of Trump’s vetoes during his presidency, but Cassidy said Sunday his “inclination would be to always vote for the troops and to vote for our national security.”

Indeed, Trump could lose this one if he doesn’t relent.

“I hesitate to speculate about potential vetoes or any of that, but I would think it will get a strong vote coming out of the Senate. And I hope it would be something he could sign,” Senate Majority Whip John Thune (R-S.D.) said on Thursday.

The independence movement intensifies its campaign against the elder Trapero