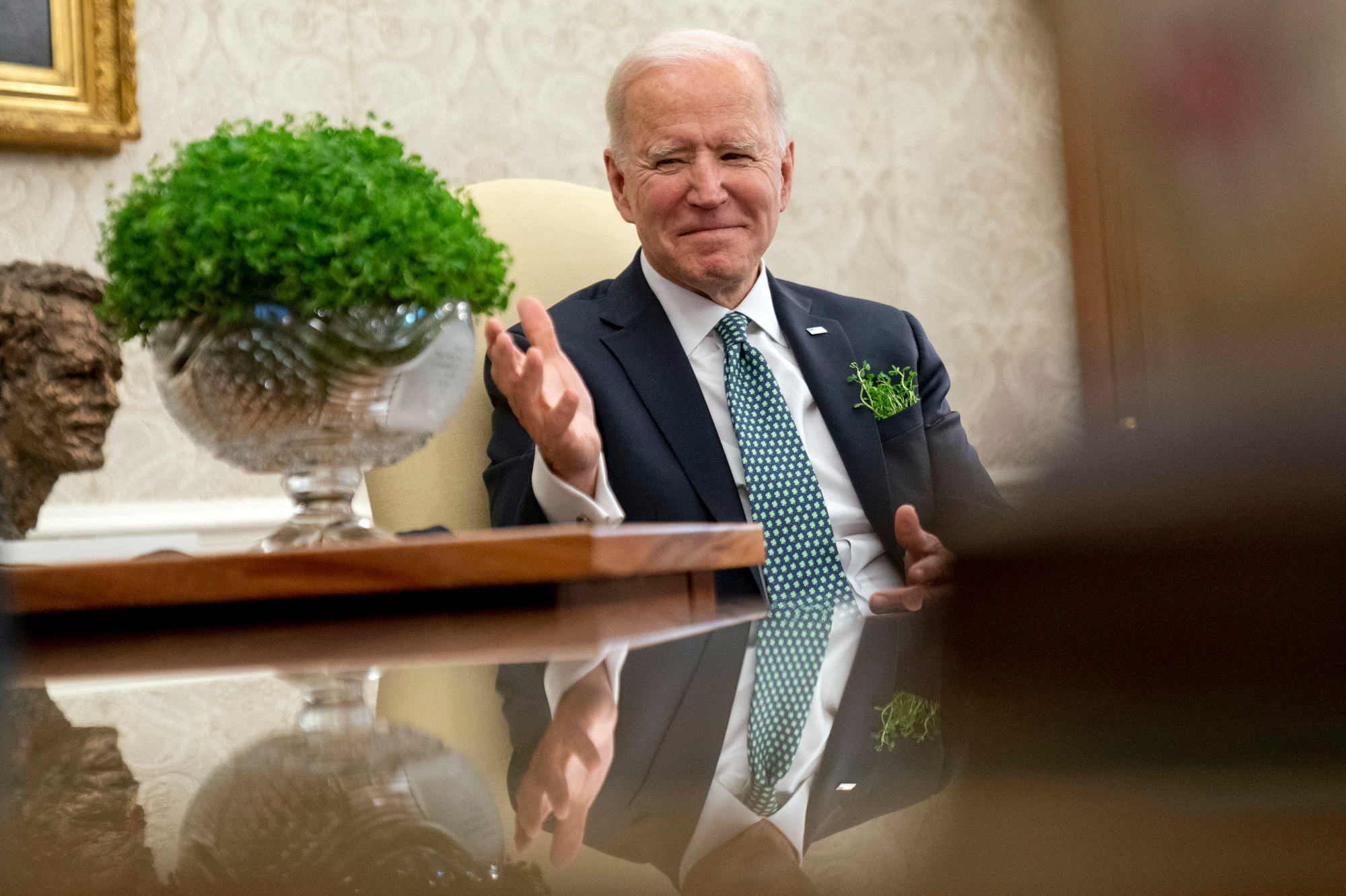 To accompany the trip, Biden commissioned a genealogy covering his mother’s side of the family, which was released to the public. He also gave an interview to Ancestry.com, which ran posts about the genealogists’ findings.

Left out of the fanfare was most of Biden’s paternal lineage, which is about three-quarters English. While he has made a habit of name-checking his father’s Irish Hanafee ancestors, Biden’s non-Irish ancestry has not played a prominent role in his public image.

According to Biden, it has also played a limited role in his own self-image, on account of the early influence of his mother’s family. When the future president was a young boy, he recalled his great-aunt Gertie telling him, “Your father’s not a bad man. He’s just English.”

“There is an ongoing debate as to whether Biden is an Irish, English or German name,” Biden told Irish America in 1987, but his Scranton relatives preferred not to dwell on the likelihood that they were living under the same roof as an Englishman. “My grandfather and my mother were never crazy about it being English and used to say, ‘Tell him it’s Dutch,’” he recalled. (Later, Biden began describing his surname, accurately, as an English name).

Biden’s father, the then-senator said, seemed to take the Finnegans’ side at times, expressing the belief that the name Biden was Irish.

At least that’s the way Biden recalled it to Irish America as he prepared for his first presidential run. Expressions of identity have a way of adapting themselves to the political moment. (In America, the German Trumps, in the aftermath of World War II, took to passing as Swedish, according to one of the former president’s cousins, who has taken on the role of Trump family historian.)

There was little reason, or outlet, for Biden to express an English side to his identity as an up-and-coming Democratic politician in Delaware starting in the early ’70s. The French Huguenot du Pont family and their allies dominated Republican politics in the state, an extension of a broader Northern pattern in which native WASPs generally aligned with the Republican Party against white ethnic and Black Democrats.

There was still an “iron bond” between Irish Catholics and the Democratic Party at that time, perhaps best illustrated, Quinn said, by an old joke: One Irish Catholic woman turns to another and says, “Did you hear? Mr. Murphy became a Republican.” To which the other woman responds, “That’s impossible. I saw him at mass on Sunday.”

It was natural, then, for Biden to embrace his Irishness.

Republicans of that era faced a different calculus. Ireland’s former ambassador to the U.S., Sean Donlon, has said that Ronald Reagan asked him not to publicize information about the then-candidate’s Irish heritage in the run-up to the 1980 presidential election. In order to appeal to his party’s base, Donlon has said, Reagan wanted to be seen as a WASP. (Reagan did make at least occasional references to his Irish roots during that campaign, and he embraced them after winning, dispatching an aide to place an Inauguration Day telephone call to well-wishers in his ancestral village of Ballyporeen.)

As it turns out, there were also reasons for Biden to avoid calling too much attention to his paternal ancestry.

Years before he unveiled the Irish branches of his family tree, Biden had another, fuller genealogy drawn up. Back in 2004, the then-senator cold-called James Petty, a genealogist in Salt Lake City (the Mormon Church runs the world’s greatest genealogical research library there). Biden initially wanted help researching his Scranton ancestors. Eventually, he commissioned a complete genealogy. The results were not published.

James Petty died in 2020, according to his widow and professional partner, Mary Petty, who said she worked on the Biden genealogy. Mary Petty told me she sat down with Biden’s sons Beau and Hunter as part of the process. She declined to provide me any information about the genealogy itself, citing client confidentiality.