“I consider myself a feminist, but there is a hate speech towards men”

Macarena gomez has gone to “This is the mood”, the Badoo entertainment format that brings to the table and gives voice to topics of interest especially among young people, and has turned it upside down. In a space dedicated to infidelity, the actress has answered questions such as whether it is really possible to give a relationship a second chance and, even, if it is viable to continue it. Is there really room for second chances? Is it possible to continue the relationship?

In the interview, Macarena Gómez affirms that she is a very self-confident person and that this has helped her overcome problems in her relationships: “When a boyfriend has left me, I have thought: worse for them, they lose it.” She has also spoken as in her case, her husband, understands her life as an artist perfectly, without hindering her.

In addition, he has reflected on how for a long time in the film industry screenwriters have had more voice than screenwriters, clarifying that it is a complicated issue but that, naturally, as there are more male scriptwriters, they write about what they know best: themselves. The actress believes that the process of change towards gender equality in this industry is somewhat slow, without imposing it, as she believes the feminist movement does to some extent. “I consider myself a very feminist person but I think there is a hate speech towards men,” she says. 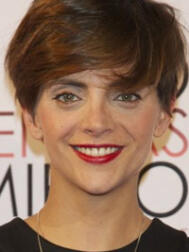 Despite this, Macarena comments that the most important thing is home schooling from equality, teaching that men have the same jobs as women and vice versa, the artist comments: “My husband cooks in my house, but I wash”.

After years of professional career, the actress reflects on her role in horror cinema in Spain, assures that she was terrified to see “ET” as a child but it was not until she saw “Los sin nombre” when she was young that she fell in love with the genre again . How could I go so long without seeing horror movies?he wonders. Gomez adds that he has a lot of fun shooting it and takes it as little adventures. “I enjoy it,” he concludes.

He also alluded to his recent leading role in the series “30 coins,” directed by the acclaimed director Álex de la Iglesia and with a clearly fantastic, terrifying and dramatic theme, emphasizing Christianity and the power of good and evil. Macarena, muse of the aforementioned director, talks about what it is like to work with him. “I love it because he has very clear ideas,” he commented, adding that it requires a lot of dedication from the cast of actors. Gómez says that during the filming of “30 coins”, Álex himself suggested they do the action scenes without doubles.