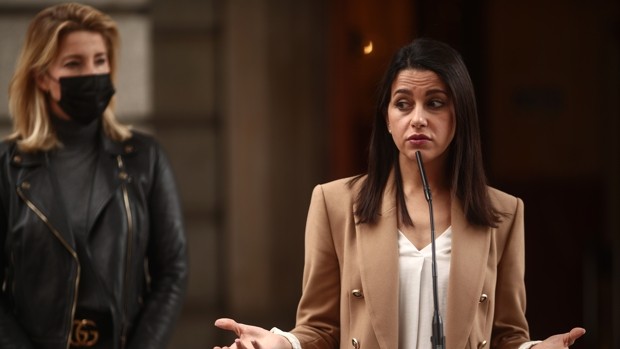 The president of Citizens (Cs), Inés Arrimadas, sees the thesis defended by his party reinforced after yesterday the European Comission
once again demand a legislative amendment from Spain so that the judges directly elect at least half of the members of its governing body, the General Council of the Judiciary (CGPJ). This Wednesday, the leader of the Liberals has claimed the Executive and the PP that they work together in a reform to “depoliticize” Justice.

The pressure from Brussels was key so that yesterday the Minister of Justice, Juan Carlos Campo, publicly ask the parliamentary groups of the Government, PSOE Y United we can, to withdraw the bill with which they intended to reduce the majorities necessary to renew the CGPJ, whose current mandate expired more than two years ago.

Currently, eight of the twenty members are elected from among jurists by three-fifths of the Congress and from Senate and the other twelve also by three fifths of both chambers – half each one – of between judges and magistrates. The government parties, with their reform, wanted the twelve members of the judicial career to be appointed only by an absolute majority, which in practice gave control of the majority of the CGPJ to the Executive forces and their allies.

Europe has been warning for years that progress must be made in the opposite direction, as the Commission repeated yesterday, so that the judges elect at least half of their governing body. And that raises Cs, as defended last September in a bill whose consideration was overturned and only received the support of the PP and Vox.

Without waiting to renew it

In the courtyard of Congress, in statements to the media, Arrimadas has defended, together with the deputy of Cs Maria Muñoz, the creation of a table of three -PSOE, PP and Cs- to address the reform that Europe demands and that the judges select half of the members of the CGPJ. Although the European Commission urges in the first place -before the reform- to renew the current Council, Arrimadas sees scope for the system change to be resolved in a few months and thus be able to “leave behind the WhatsApp conversations by distributing judges.”

«The Spanish do not expect any more false promises that later remain in a drawer. This reform of the system is the only guarantee ”, Arrimadas has claimed, who recalled that both the PSOE and the PP have committed in the past to“ depoliticize ”the governing body of the judges and that later, in the Government, they have changed your mind. “After the blow that the European Commission has given to the Government, the time has come for Spain to also comply,” Arrimadas has sentenced, who as he has revealed has already transferred his proposal privately to both the President of the Government, Pedro Sanchez, like the leader of the opposition, the popular Pablo Casado.