Inoculations by December? States aren’t so sure 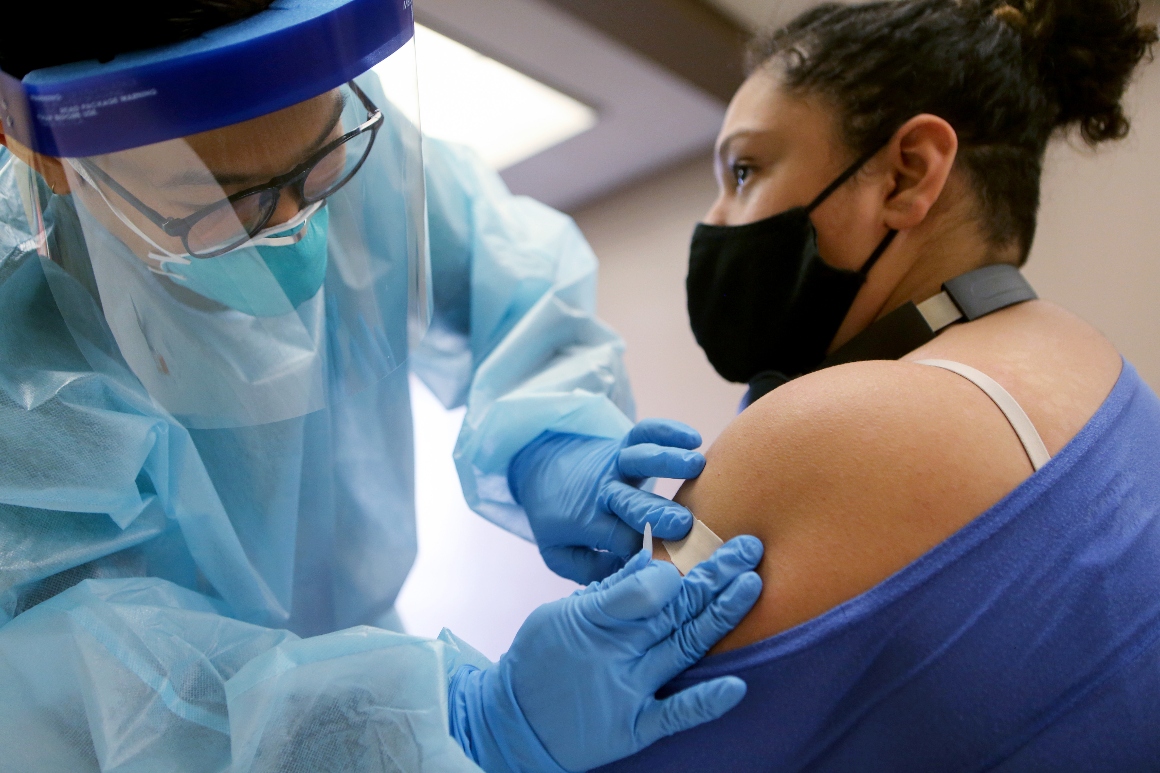 The incoming Biden administration cannot talk to federal agencies and does not know what problems the current leadership is most concerned with, leading some expert advisers to openly worry about access and distribution.

“This is tremendously difficult, expensive work, and we are hearing resoundingly from state and local health departments that they need more help to carry out this last mile,” said Jason Schwartz, a Yale public health professor who is also serving on Connecticut’s vaccine advisory committee. “Time is running short to get states and cities what they need so we’re not left with millions of highly effective vaccines but no good way to get them to the people who need them.”

The United States is averaging more than one million new infections per week and hospitals across the Midwest and Southwest are overrun, putting patients in parking lots and calling on FEMA for reinforcements. News that both Pfizer and Moderna have vaccines that are at least 90 percent effective in trials and could be ready next month have buoyed hopes that the end is in sight. But the FDA’s authorization is only the first step. Effectively distributing vaccines is a matter of life and death and every day’s delay could mean another thousand American deaths.

— States say they need more than $8 billion from the federal government to promote and distribute vaccines.

— The federal government has not told states how many doses they will receive, hampering their ability to plan for which of many priority populations should get vaccinated first.

— Nearly a dozen states still have not agreed to share patient data with the federal Centers for Disease Control, citing privacy concerns, meaning it will be hard for the federal government to track who has been vaccinated and who still needs a second dose.

President Donald Trump on Friday took a victory lap outside the White House, heralding the yet-to-be authorized Pfizer vaccine and promising that 20 million doses could be given out in December. Moderna on Monday announced that it also expected to dole out 20 million doses in December if it receives FDA authorization, and top Trump administration officials promised that within 48 hours of the FDA authorizing a vaccine they will have needles in people’s arms.

But many state and local health departments say they can’t back up that promise.

“The federal government has invested an incredible amount of money and attention in developing these vaccines and that’s gotten us very far very quickly,” said Lori Freeman, the CEO of the National Association of County and City Health Officials. “We don’t have the investment in getting the vaccine from the lab to the people … We’re running out of time for pulling those things together.”

States, she said, need at least $8.4 billion to hire and train people to administer what will likely be multiple vaccines, ensure that electronic records can send information across state lines and to the federal government, and have a public health messaging campaign that explains the importance of the vaccine as well as where and when to get it.

Personnel shortages are further complicated by the surge in Covid-19 cases across the country, said Deidre Gifford, Connecticut’s acting public health commissioner. There are 73,000 Americans hospitalized with Covid-19, double the number a month ago.

“A lot of people who might otherwise be working as vaccinators may be being deployed to address the pandemic, Gifford said.

Congress does not appear likely to approve a round of funding ahead of a vaccine rollout and Health and Human Services Secretary Alex Azar has repeatedly rebuffed state requests, insisting that they have the resources needed and that the federal government will backstop any shortfalls should they occur.

States also need to know how many doses they will get so they can have some idea of how to ration limited supplies during the first few weeks of distribution. While there is a general consensus that inoculating health care workers is a top priority, states don’t know which health care workers to line up first or how many they’ll be able to vaccinate in the first few weeks. And without knowing how many doses they will receive — or how many retail pharmacies like CVS will receive — states can’t know which distributors to use to move vaccines around the state, which could delay vaccine distribution in certain places.

“It’s not like you can just stand up vaccination clinics and start putting needles into people’s arms,” said Stephen Ostroff, a CDC veteran and former acting physician general in Pennsylvania. “My major concern is whether states have the infrastructure in place to be able to readily identify who is going to get the vaccine and set up clinics to do the administration. … It would be nice not to have any open questions when it comes time.”

Schwartz, the Yale professor who serves on a Connecticut advisory committee, fears that the vaccine rollout will look a lot like HealthCare.gov’s botched rollout, which gave the Affordable Care Act an early black eye that it struggled to overcome.

“If things go badly in the initial weeks it could hamper the vaccination program for months to come,” he said.

Each state submitted a vaccine distribution plan to the CDC but POLITICO’s review of those documents found many placeholders where states lacked basic information such as when vaccines will arrive or how many doses they might receive.

“There are still a lot of details that have to be worked out and the federal government’s position, like on testing, like on PPE, like on masks, they point to the states, and while it’s up to the states, they don’t provide the resources for the states to do what they need to do,” New York Gov. Andrew Cuomo, who leads the National Governors Association, told MSNBC’s Katy Tur on Friday.

The White House has said Cuomo’s criticisms are politically motivated and that he is regularly absent from governor-only briefings on vaccine distribution.

Meanwhile, roughly a dozen states, including some led by Republicans, have also balked at the Trump administration’s request to share patient information when Covid-19 vaccines become available, citing numerous privacy restrictions, some of which are a matter of state law. The dispute could make it harder for the CDC to track who has received a vaccine, adding to the difficulties of delivering, tracking and monitoring vaccines that require a second dose.

“We need to know where every vial is, whether it was in the factory or on a truck or distributed to a vaccination site,” Matthew Hepburn, head of vaccine development for Operation Warp Speed, the intergovernmental effort to distribute a vaccine, said last month during a media briefing.

But several state officials fear that turning over personal information could deter people from getting the vaccine.

Meanwhile, some states are still getting acquainted with the Trump administration’s unproven nearly $16 million Vaccine Administration Management System, a new hub for scheduling shots and managing vaccine supplies, as well as another new system developed by the tech firm Palantir, headed by Trump ally Peter Thiel, to track manufacturing, state planning and delivery of the vaccine.

“When new systems roll out, there are glitches,” said Hemi Tewarson, a senior policy fellow at the Duke-Margolis Center for Health Policy. “It’s just the nature of systems. It’s nobody’s fault. It’s just how it is.”

An HHS spokesperson said that while having states share data is important, the IT infrastructure will not be affected by delays in signing the data-use agreements. The vaccine management system is running and more testing is planned next week, according to HHS.

To be sure, many state officials and local health leaders believe they can meet the challenges. Cindy Findley, director of the division of immunization in the Pennsylvania health department, said her state has the money it needs and commended the CDC for making needed changes to the state’s data-use agreement. Others have lauded Operation Warp Speed for being on the cusp of distribution in less than a year, a feat many considered unachievable. And the Trump administration paid drug companies to stockpile millions of doses in advance of FDA authorization, a step that has received widespread approval from public health experts.

But time is growing short and many challenges still need to be addressed. One consistent fear that public health experts, state officials and those inside the Trump administration all share is that people won’t want the vaccine, either because they fear the science has been politicized or because they believe coronavirus has been overhyped.

A recent survey found that no more than 70 percent of respondents said they would likely get a vaccine, even if it was 90 percent effective. But there has been no national campaign to promote a vaccine. While Trump has hyped the vaccine as a miracle cure, he has also asserted the virus isn’t a big deal and that the vast majority of people recover after only a few days.

“Even in a good year our rate of influenza vaccination is pretty poor and we’ve been doing advocacy around that for decades,” said Peter Hotez, a virologist and dean of the National School of Tropical Medicine at the Baylor College of Medicine. “That tells us it’s going to be a challenge for Covid-19.”

An HHS spokesperson said the agency intends to provide regular updates on safety and effectiveness in an effort to allay fears, and work with health providers to boost their confidence in any authorized vaccines.

Howard Sklamberg, an attorney at Arnold & Porter and a former FDA official, said the Biden administration may have caught a break because the vaccine was announced after the election but before the inauguration so that Trump can praise its efficacy without stoking fears that it was rushed for political reasons.

Despite all these challenges the Biden team has not been briefed by Trump officials because the president has refused to concede the election and begin the formal transition. The president-elect said Monday the obfuscation may lead to unnecessary deaths and his incoming chief of staff, Ron Klain, said the incoming administration doesn’t know where the Trump team stands on vaccine distribution or what problems it is working, or struggling, to address.

“The bigger issue will be the mechanics of manufacture and distribution, getting this vaccine out,” Klain said Sunday on NBC’s Meet the Press. “There are people at HHS making plans to implement that vaccine. Our experts need to talk to those people as soon as possible so nothing drops in this change of power we’re going to have on January 20.”