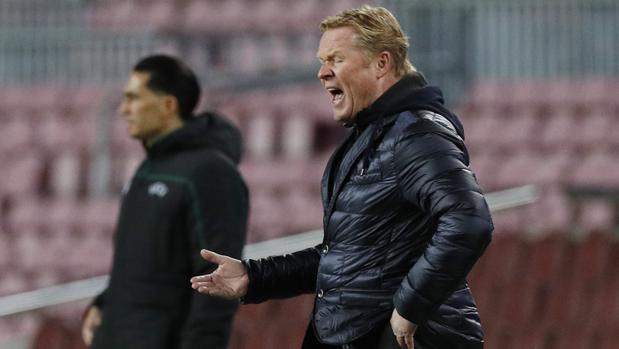 Four months and 16 official games have been enough to question Ronald Koeman, who only seems to be saved by the institutional chaos that Barcelona is experiencing, which is going through without a president after the resignation en bloc from the Bartomeu board last October. The Dutchman has secured the position until the end of January, when the presidential elections are held, although the majority of candidates who aspire to appear at the polls have stated that they have the Dutchman. With nuances, yes, from the two favorites to the final triumph. While Víctor Font, who would come hand in hand with Xavi Hernández, had to rectify when he assured that “Koeman will not continue even if he wins the treble”, Joan Laporta has warned that the Dutchman deserves some credit leaving his decision ambiguous if he wins the elections . The results, the team’s trajectory, the shortcomings on the pitch, its football proposal and the lack of self-criticism of the coach have generated discomfort in the dressing room and many doubts among the fans, who advocate, resigned, to reconfigure the objectives of the season with priority to finish among the top four in the League, to be able to play the Champions League next year and build an exciting and guaranteed team. Ninth in the league, twelve points behind the leader, and second in his European group after being overwhelmingly beaten at home by Juventus (0-3) on the last day, are enough arguments to question Koeman’s methods. His credit seems quite exhausted, although since he landed at the Camp Nou he has had to overcome obstacles. From Messi’s famous and controversial burofax asking for his departure to Bartomeu’s resignation, through the questioned departures, the burdensome economic situation, the institutional storm surge, the numerous injuries that have been decimating the team and the decompensation of a team that has not the signings he requested arrived. He is reproached for his bad loss and the search for excuses after each stumble instead of analyzing the roller coaster in which the team has settled and its problems against the strongest rivals such as Sevilla, Getafe, Real Madrid, Atlético or Juventus. The referees, the VAR, the individual failures of some players, the performance of the team, the calendar or the physical problems of the squad are recurring targets against which he throws little self-critical darts. Although the dressing room has acknowledged part of the blame, such as the one denounced by Griezmann after the defeat against Juventus (“It’s a lack of everything: desire, attitude, wanting to run, all wrong”), both the players and the fans agree in an aspect that they reproach him: his intransigence in applying a system with two pivots that is being shown that it does not work because it has never been part of the culé DNA. The stands do not like the 4-2-3-1 and the team does not feel comfortable because it causes an excessive separation between defense and attack, creating spaces for rivals to turn on Ter Stegen’s goal. Indeed, the German criticized this system yesterday veiled: «One thing is individual errors and another the way in which you defend. They are different things and you have to value it differently. But the coach is reluctant to give his arm to twist. «For me it is not a system issue. If it were a system, we would have to change, but for me with these players it is our system. You have to learn and go out into the field with confidence and not leave spaces, “he argued yesterday. Barcelona park the Champions League until February with the feeling of being an affordable rival for the team that touches him in the second round and with the need to avoid ridicule in a League in which he was almost evicted in December. Ten games in the domestic competition is the margin that remains before a new president takes office and is forced to make drastic decisions to redirect an unthinkable situation just a year ago, when under the tutelage of Ernesto Valverde, the Barcelona led the league and brilliantly qualified for the knockout stages of the Champions League as group winners, without losing a match, ahead of Dortmund and Inter.