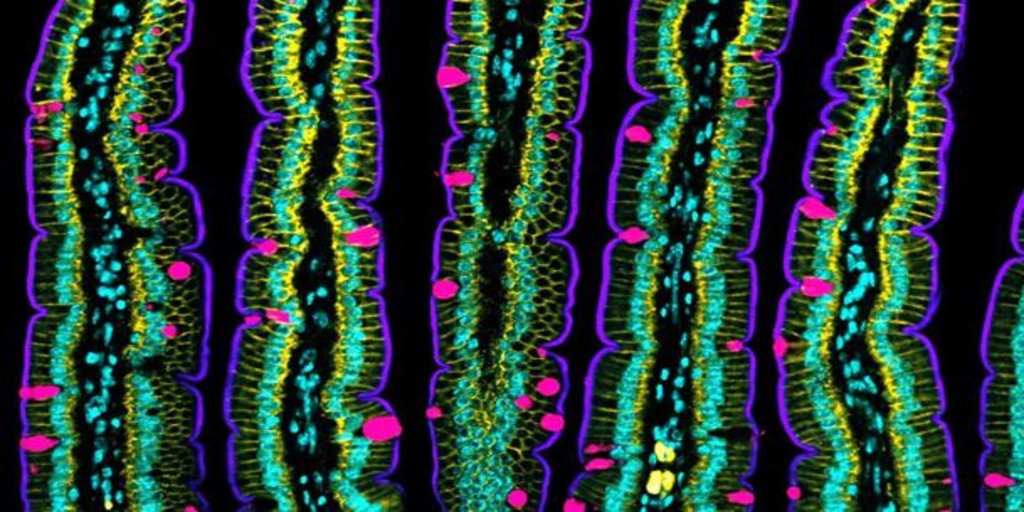 The design of mini intestines Laboratory tests from human cells allow us to understand the bases of diseases such as celiac disease or cancer, and, in the future, to find therapies for these pathologies.

These mini organs, developed by researchers from the
Institute of Bioengineering of Catalonia (IBEC)They have also made it possible to discern something that had not been understood for more than 200 years: how the intestine takes its curious shape of valleys (crypts) and mountains (villi).

Explica a ABC Health Xavier Trepat, investigator
CaixaResearch and leader of the study published in
«Nature Cell Biology», that the human intestine is made up of more de 40 m2 of fabric, with multitude of folds on its inner surface reminiscent of valleys and mountain peaks, to achieve, among other objectives, increase the absorption of nutrients.

In addition, “it is in constant renewal, which implies that approximately every 5 days all the cells of its inner wall are renewed to guarantee proper intestinal function.”

Until now it was known that this renewal was possible thanks to stem cells that are protected in the so-called crypts, and that give rise to new differentiated cells.

Now, this group of researchers has deciphered the mechanism by which crypts adopt and maintain their concave shape, and how the migration movement of the cells towards the tops occurs, without the intestine losing its characteristic pleated shape.

Scientists have combined computer modeling systems with experiments with mouse cell intestinal organoids, showing that this process is possible thanks to the mechanical forces exerted by the cells.

Using mouse stem cells and bioengineering and mechanobiology techniques, researchers have developed mini intestines, organoids that reproduce the three-dimensional structure of valleys and peaks recapitulating tissue functions in vivo. Using microscopy technologies developed in the same group, they have carried out, for the first time, high resolution experiments that have made it possible to obtain 3D maps showing the forces exerted by each cell.

In addition, with this in vitro model they have shown that the movement of new cells to the top is also controlled by mechanical forces exerted by the cells themselves, specifically by the cytoskeleton, a network of filaments that determines and maintains cell shape.

“Contrary to what was believed until now, we have been able to determine that it is not the cells of the intestinal crypt that push the new cells upwards, but rather it is the cells at the top that pull the new ones up, something like a mountaineer who helps another to climb by pulling him », he assures Gerardo Permission, co-first author of the work.

The new mini-intestine model will allow the study, in reproducible and real conditions, of diseases such as cancer, celiac disease or colitis, in which there is a lack of control in the multiplication of stem cells or a destructuring of the folds.

What’s more, intestine organoids they can be manufactured with human cells and used for the development of new drugs or in the study of the intestinal microbiota.

“It is important reduce animal research“Acknowledges Trepat, and” with miniorganoids like these, and others that are being done in different laboratories, we can move forward.

However, he acknowledges that the systems manufactured so far are quite simple. “We need more complex mini-organs to be as similar to what happens in a living organism.”

That, he points out, is one of the paths towards personalized medicine.