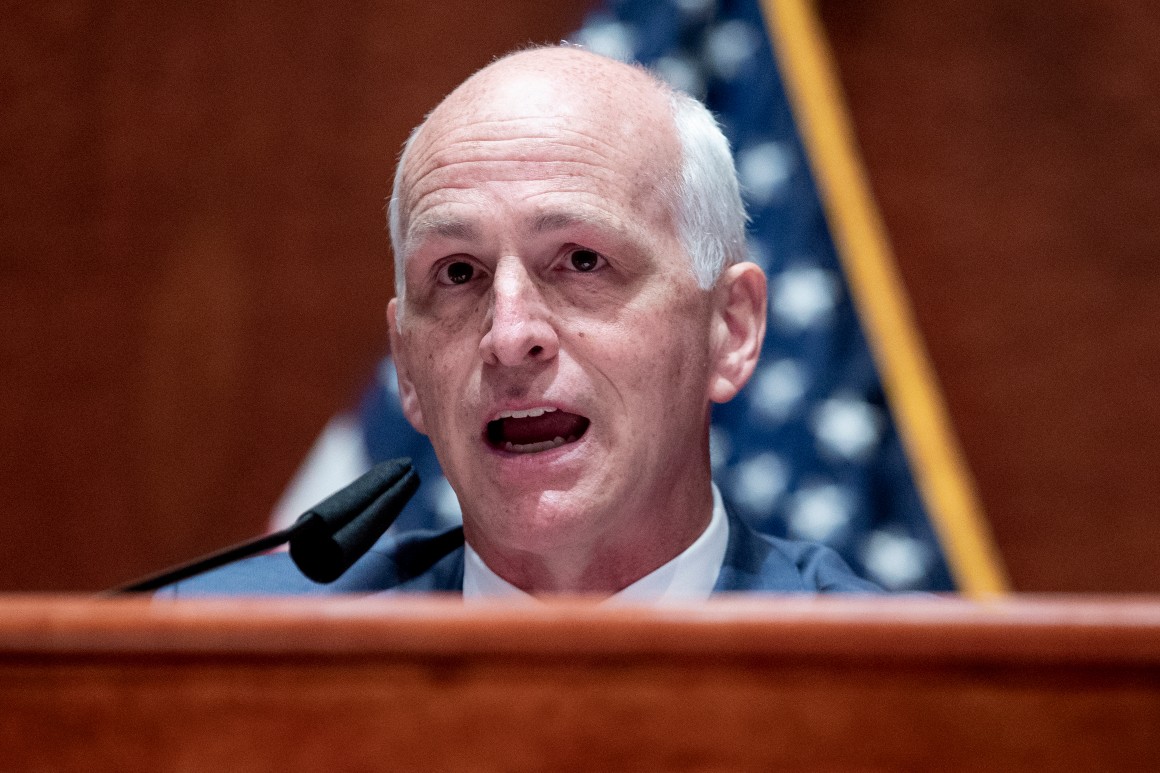 “There’s no way we would have a defense authorization bill with that language in it,” Senate Armed Services Chair Jim Inhofe (R-Okla.) told POLITICO on Monday. “There’s no question about it. And so obviously, I would have to do what I could to override a veto.”

Inhofe said he has not spoken with Trump since last week, when the president further hardened his stance even as Republicans dismissed his posture outright.

Republican lawmakers appeared exasperated with the president’s ongoing offensive against the must-pass $740 billion bill, which includes a pay raise for U.S. troops and dozens of other bipartisan priorities, including many that the president himself has touted. Congress has succeeded in passing the annual defense bill for almost 60 years.

“I would hope that he would sign the bill. It’s important. We’ve made it very clear that national security is the No. 1 thing we do around here,” Senate Majority Whip John Thune (R-S.D.) told reporters. “If you can’t get that right, the rest is conversation.”

And Sen. John Cornyn (R-Texas), a close ally of Senate Majority Leader Mitch McConnell, said the defense bill “will pass one way or the other with a strong bipartisan vote.”

Many Republicans and Democrats in both chambers support overriding a presidential veto of the National Defense Authorization Act in the waning weeks of Trump’s presidency, with House Democratic leaders saying they will cut a holiday recess short to overturn a veto of the annual defense policy bill.

“If the president vetoes it, we will come back to vote to override,” House Armed Services Chair Adam Smith (D-Wash.) declared Monday.

And House Majority Leader Steny Hoyer said Monday that it was his “expectation” that the House would come back in session in order to override a presidential veto.

The top Republican on the House Armed Services Committee, retiring Texas Rep. Mac Thornberry, suggested GOP support for the compromise defense bill could grow with several red flags for Republican lawmakers left out of the compromise NDAA, including a massive public lands package that was rolled into the House bill.

A large enough show of support, he said, might avert a veto showdown.

“I think this conference report is better than either of the chambers’ bills,” Thornberry told reporters. “I know [from] a House Republican standpoint that some of the reasons members voted against the bill on the House floor have gone away.”

“The stronger the vote, the better the case is that Section 230 needs to be addressed, but in a different place and in a different way,” he said. “Doing it on the defense bill, airdropping it at the last minute, is not the right way.”

Top Democrats, too, believe that strong backing for the defense bill could push Trump off of his demand.

“The first step is passing the bill. And I think if there’s a very strong vote on both sides, that will be a disincentive for the president to veto it. I think that’s what his staff would recommend,” said Rhode Island Sen. Jack Reed, the top Democrat on the Senate Armed Services Committee. But, Reed added: “[Trump] is unpredictable.”

Leaders of the House and Senate Armed Services Committees have emphasized the need to pass the landmark bill by December. Without a defense bill, a number of key authorities, including special pay and bonuses for troops, will expire at the end of the year.

Killing the defense bill, they warned, would effectively punish U.S. service members for Washington’s inability to agree on one of the few remaining bills to reliably become law each year.

“All members have to bear the consequences of a ‘no’ vote,” Thornberry said. “And one of the consequences is that military pay is going to go down, that we are going to forego a lot of important bipartisan steps to better compete with the threat from China.”

With the House set to pass the defense bill on Tuesday and the Senate expected to follow suit shortly thereafter, congressional leaders are preparing for several different scenarios.

One is the possibility that Trump seeks to run out the clock and force Congress to remain in session until right before Christmas. The Constitution allows the president 10 days, excluding Sundays, to sign or veto a bill. As long as Congress remains in session during those 10 days, the bill can become law without his signature, but if they adjourn for the holidays, the bill does not become law, in what is known as a pocket veto.

Some lawmakers have called for passing a slimmed-down version of the defense bill that only includes provisions that must be renewed by year’s end. Armed Services leaders have dismissed the possibility of a “skinny” NDAA.

“If for some reason it doesn’t pass and we can’t override the veto, the only option is to try to pass this exact deal when Joe Biden becomes president on Jan. 20,” Smith said.

“A ‘skinny’ bill is not an option,” he added. “There are demands and priorities that people have that a skinny bill will not address, and then we won’t have the votes.”

Lawmakers are feeling a sense of urgency to get the bill to Trump’s desk as quickly as possible in order to start the 10-day clock so that a veto can get returned to Capitol Hill more quickly. Hoyer said Monday that he wants to avoid the possibility of a pocket veto.

It would mark the first override of a veto by Trump if the House and Senate are successful. Trump has nixed a handful of bills during his term, including resolutions to block military funding for a border wall and terminate arms sales to the Middle East. None of those efforts came close to overriding Trump’s vetoes.

The House and Senate both passed their versions of the defense bill with veto-proof majorities in July. Congressional leaders are bullish that they can replicate that support this week.

House leaders have little margin after passing their bill with 295 votes in favor, just over the two-thirds threshold. The Senate passed its defense bill over the summer with 86 votes, well above a two-thirds majority, and has a much greater cushion on a veto override vote. Still, some cracks have emerged among the bloc of GOP senators who supported the original bill.

Senate Judiciary Chair Lindsey Graham (R-S.C.), a vocal defense hawk and Trump ally, is backing the president’s effort to include a Section 230 repeal in the defense bill, tweeting on Friday: “We have a Defense Department to protect our liberty, but our liberty is at risk if we don’t change Section 230.”

Conservative Sen. Josh Hawley of Missouri, who supported the original Senate bill, said he’ll oppose the final bill over Section 230 and the inclusion of an amendment, authored by Sen. Elizabeth Warren (D-Mass.), that would force the Pentagon to rename military bases that honor Confederate leaders.

Democrats who vote against the bill this week could vote in favor of overriding it as a show of opposition to Trump.

Warren, who is likely to oppose the bill despite securing her provision on Confederate bases, told POLITICO that she was “very worried about the topline number.” When asked if she would vote to override a Trump veto, Warren replied: “Yes. You don’t even have to finish that question.”

For Thornberry, opposing the must-pass bill because it doesn’t address online companies’ liability protections “can’t be the standard.”

“If somebody’s going to vote no on a bill because of what’s not in it, that has nothing to do with it, then the possibilities are limitless,” Thornberry said. “You can vote no on the defense bill because it doesn’t fix health care or immigration or taxes or whatever you care about.”

Burgess Everett contributed to this report.