Maya Wiley says she should be mayor of New York. Former City Hall colleagues aren’t so sure. 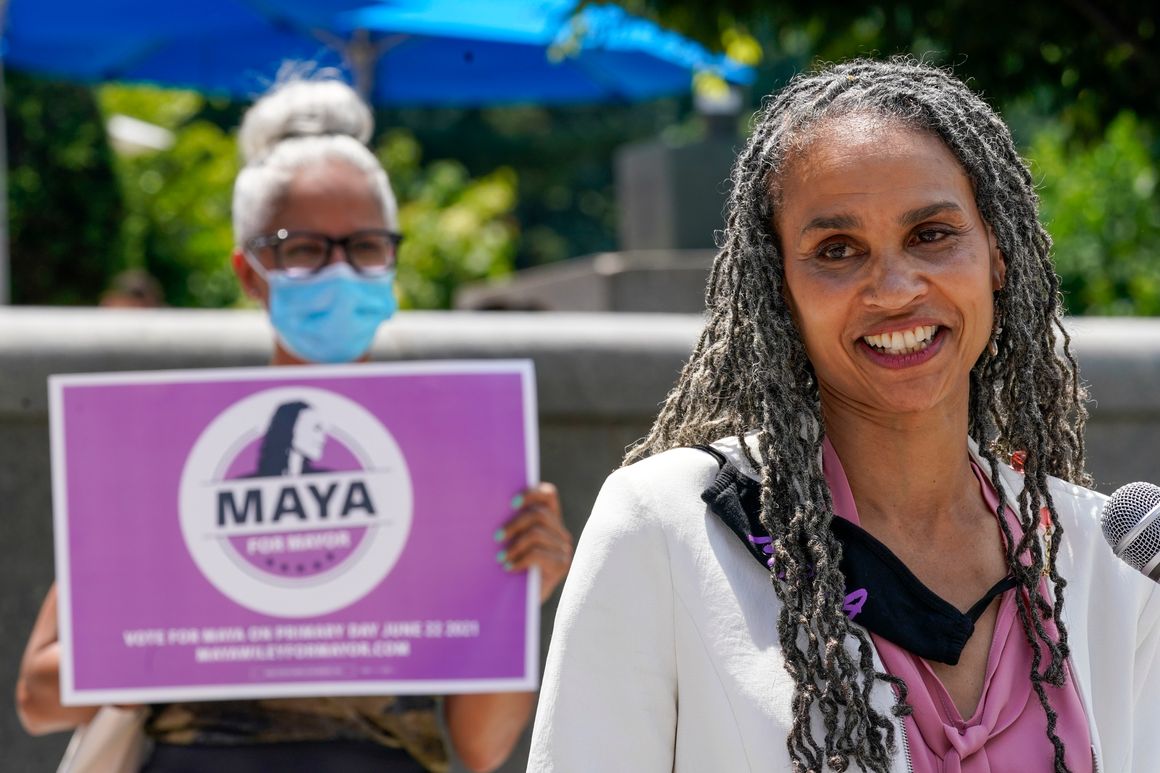 “I’m a woman who stands on her own two feet,” Wiley said at the first mayoral candidates’ forum last fall — a point she has repeated throughout the campaign when asked about her ties to de Blasio.

Wiley, who is a former assistant U.S. attorney, worked for years as a civil rights lawyer and was a legal analyst for MSNBC, tends to bristle when reporters focus on her stint in the de Blasio administration.

“You know, I don’t think I’m the only woman in New York City that is always wondering why we’re being asked to respond about a man we worked for,” she said at a campaign stop Saturday. “All I can say is I’m really grateful that I had the opportunity to serve the city of New York, grateful to have been the first Black woman to be a counsel to New York City mayor.”

But her time in City Hall is the most relevant experience she’s had for the position she’s currently seeking — and she gets mixed reviews from former colleagues in the de Blasio administration.

Wiley was hired for the counsel’s job soon after de Blasio took office in 2014, and left in the summer of 2016 to become head of the Civilian Complaint Review Board.

Former colleagues interviewed by POLITICO, all of whom requested anonymity to speak freely about their former co-worker, call her everything from committed and principled to ineffective and misguided. While they say she espoused the same left-leaning views then as she does now, some criticized Wiley for failing to implement her progressive ideals when she had the chance to do so as an adviser to the mayor.

Wiley touts her successes in expanding access to broadband internet and increasing contracts for minority and women owned businesses, but both efforts have had stumbles. She was the counsel to the mayor as he pursued risky fundraising practices that led to multiple investigations, though none of them resulted in charges. Wiley also designed the legal strategy behind, and became the public face of, the mayor’s failed effort to shield his emails with consultants from public scrutiny.

She came under attack from a rival at the final primary debate last week over her work on expanding access to broadband, her signature project while she was at City Hall.

Ray McGuire, a former Wall Street executive, called universal high-speed internet something Wiley “has promised, on which she’s not delivered.”

“One and a half million New Yorkers don’t have broadband on your watch,” he said at the debate, sponsored by POLITICO, WNBC and Telemundo 47.

“Not under my watch, Ray — that is a falsehood, and it has to be called out,” Wiley shot back.

Wiley said delays in expanding broadband, recently reported by The City, happened after she left the administration. She says she’s proud of getting free internet installed at all apartments at NYCHA’s Queensbridge Houses. Two other developments that were slated to get universal broadband, the Red Hook and Mott Haven Houses, still have not received the service, McGuire pointed out.

“I left city government five years ago, very grateful to have had the opportunity,” Wiley said, citing her work on a lawsuit against Verizon for failing to install high-speed internet in all neighborhoods in the city.

Wiley has touted her police reform credentials, but one former City Hall staffer said she was not a strong voice within the administration on key legal controversies around policing.

“She was not considered a serious lawyer,” the staffer said. “The consensus, frequently, was that she got us into a lot of problems legally.”

The de Blasio administration, acting on advice from the Law Department — a separate entity from the mayoral counsel’s office — stopped releasing many police disciplinary records that had been routinely published for years, citing a state law known as 50-a. The law was ultimately repealed last year amid calls for police reform following the murder of George Floyd.

Wiley did not fight that approach, and was not an effective counter to the more conservative legal tendencies of then-Corporation Counsel Zachary Carter, the staffer said.

“I she thought it was so terrible, she could have gone to the mayor and said, ‘The Law Department’s screwing this up, here’s what’s going on.’ But she didn’t do that,” the person said. Nor was she aggressive in pushing to have the NYPD take disciplinary action against Daniel Pantaleo, the officer who killed Eric Garner, which the Law Department maintained the city could not do while a federal investigation remained pending.

“Everybody around her likes her and agreed with her ideologically on a lot of things, but there was never a lot of heft,” the person said. “She either didn’t care enough or didn’t know how to muster the internal organization it would take to change the mayor’s view, or couldn’t win the argument against Zach.”

A former senior administration official also said Wiley signed off on the decision not to fire Pantaleo.

Wiley has said she disapproved of the mayor’s handling of 50-a and the Pantaleo case, but declined to detail what she did from her counsel’s job to press the issues, citing attorney-client privilege.

When asked to respond to the criticisms Saturday, Wiley maintained she was proud of the work she did during her time with the mayor.

“Look, there are so many good things that happened in this administration while I was there, like paid family leave … IDNYC — which was a real game changer not just for New Yorkers but also our undocumented community — and the reality is I left five years ago and continue to serve government and the people of New York as a volunteer,” she told POLITICO.

Karen Hinton, a former de Blasio press secretary whose tenure overlapped with Wiley’s, said the attorney frequently stood up to the mayor — even if her advice was ultimately not heeded.

“She had a firm belief on what she thought the mayor should do, the city should do, and she wasn’t scared about contradicting the mayor or differing with the mayor,” said Hinton, who is volunteering for Wiley’s campaign in the closing stretch.

“I remember her being very articulate and direct with him. She wasn’t scared of him. She didn’t hesitate to give her opinion, and when they disagreed, they disagreed,” Hinton said. “At some point, she became a little frustrated with the fact that he often didn’t listen to her, and that’s why I think she decided to move along.”

Indeed, Wiley has frequently brought up her decision to leave the post.

“I quit five years ago. I voted with my feet in 2016,” she said at an NY1 debate. “I’m proud of the opportunity to get every single apartment in Queensbridge Houses free broadband. I’m proud to have helped get the first sanctuary city law passed in this city that helped protect undocumented immigrants from ICE. I’m proud that we got women and minority-owned business contracts up from $500 million, when I got a title with no resources and no staffing.”

Her lack of direct responsibility over city agencies hampered her ability to get things done, one former City Hall staffer said, saying she did not significantly move the needle on expanding broadband or MWBE participation.

“I can’t say my impression of her was that she was that effective at managing projects mostly because I didn’t see a lot of results out of her. She would talk about stuff and she had good ideas, but it never felt like she had a plan to implement those ideas other than talking about them,” the former staffer said.

“There’s no question Maya was very smart. A lot of people thought very highly of her, me included,” the person said. “But it wasn’t like I was blown away by her ability to really make change within the government. … You’re fighting against a large city bureaucracy that wants to keep doing things the way [they] are done. But that’s true when you’re mayor, too.”

Wiley’s biggest public stumble at City Hall came when she declared that a group of personal advisers to de Blasio should have their communications exempted from the public information laws because they were considered “agents of the city.”

The term was widely mocked, and thousands of pages e-mails were ultimately released after the city lost a legal battle with NY1 and the New York Post. “Everybody was stunned,” a former staffer said, describing the internal reaction when Wiley coined the term publicly.

As the mayor’s in-house lawyer, Wiley also played a role in advising him on fundraising practices, though she has maintained her guidance was not always followed. The mayor’s solicitation of donations for a nonprofit called the Campaign for One New York drew heavy legal scrutiny. A federal investigation led to no charges, but prosecutors said publicly that de Blasio intervened on behalf of donors seeking favors from the city.

“People were very loyal to her that were on her team. She was very focused on bringing in talent with diverse perspectives and backgrounds. She really cultivated those individuals,” one former aide said.

“She approaches things like a lawyer. She wants to know both sides of an argument,” the person said. “She can come to a decision quickly.”