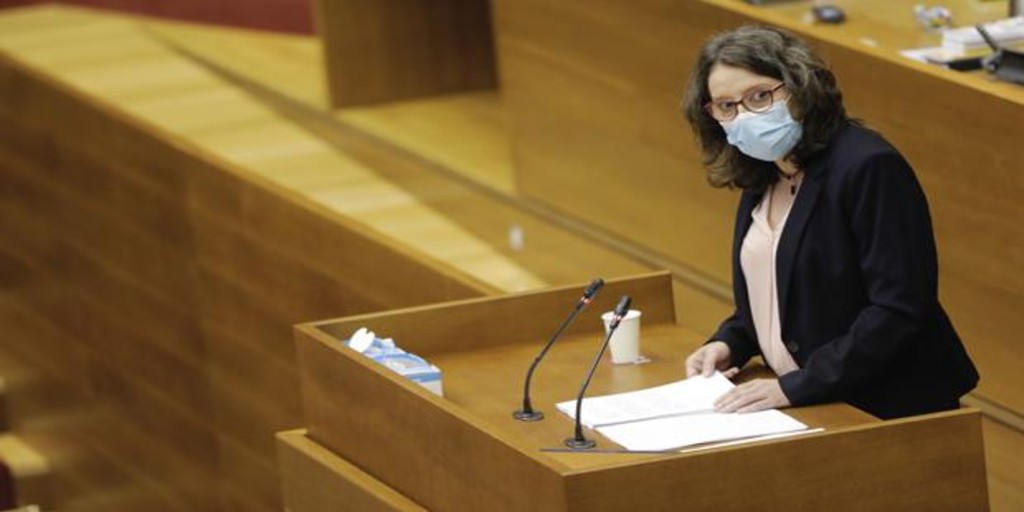 The Valencian Courts have lived this Wednesday a high-voltage plenary session for the appearance of the vice president of the Generalitat, Monica Oltra, to explain the management of the Department of Equality and Inclusive Policies that it directs in the case of sexual abuse of a young woman in custody in a juvenile center in Valencia. The accused educator, Oltra’s ex-husband, has been sentenced to five years in prison.

Faced with the mere presence of the Compromís councilors – the regional Executive is completed by PSOE and United We Can – and the harsh criticism of the opposition parties, the also spokesperson for the Valencian Government has reiterated that that marital relationship has not affected their actions nor to those of other areas. “Questioning that is questioning my honor, my moral and ethical integrity, and my institutional work,” he added.

The sentence, which recriminates that the Generalitat tried to hinder the investigation, considers it proven that Luís Ramírez went to the individual room in which the girl, who was then 15 years old, slept when she was punished for bad behavior, took her hand and masturbated with it.

In her speech at her own request in the hemicycle, Oltra has stressed that the facts proven in this ruling “do not make any reference” to the autonomous government, her department or herself, because they are not judged. “There is no one to whom they provoke more disgust than me”, has assured.

Nor do they refer to the public administration as a “cover for abusers”, or to alleged “favorable treatment” or “slogans”, or to the “helplessness of the victim.” “No one regrets more than I what has happened to Mayte, because it is the sad climax to a life of a girl who everything failed from the beginning,” he said, while defending the independence of officials in the exercise of their functions.

The rest of the sentence are, according to the leader of Compromís, “Interpretations, insinuations, value judgments or appreciations” on the performance of the Vice-presidency of the Consell, a story that the Generalitat has not been able to confront due to not being part of the process.

In fact, the document refers to “the hostility and absolute lack of empathy towards the victim that is evident in the reports provided and that are prepared by those who, paradoxically, were called to protect her.”

Something that, according to Oltra, the sentence “Value but do not test”It bases this accusation on the fact that all the psychologists -except the one from the Institute of Legal Medicine- did not believe the girl’s story and considered that the young woman had a “problematic and violent behavior”, as if the shared diagnosis was ” product of a slogan on the part of the Conselleria ».

“Anyone can be a victim of sexual abuse” and “there is nothing that can justify it,” he said, while defending that the ultimate goal of the Generalitat Valenciana was “to help”.

The “only” mistake: “inertia”

The Niño Jesús reception center, private but with arranged places, learned of the events from the minor’s mouth in February 2017. After the examination of the victim, neither the territorial management nor the residence director gave credence to his words , so that, as the protocol marked at that time, the Office of the Juvenile Prosecutor was not informed.

It is the “only error” that Oltra has recognized in this entire process, caused by the “inertia” of a protocol that It has been modified up to two occasions to act on any suspicion and the facts are communicated as soon as possible. The protection system works, the minister stressed, and “learns from the mistakes of the past.”

Four months later, in June of that same year, the young woman reported what happened to two National Police officers who came to the center for another incident and who referred the matter to the Public Ministry.

He immediately gave instructions to gather information on the case, since “no one” in his department had a record of it. In the following days, a file was opened and the young woman was referred to the Espill Institute, the entity in which the victims receive psychological support and are subjected to an examination.

The exculpatory conclusions for the defendant in that report were sent to the Prosecutor’s Office in November 2017. However, they were not brought to the trial – the defense did not have access to the file either – therefore, when their existence was known as a result of Oltra’s public statements on how Equality acted, the Valencian Supreme Court ordered a partial repeat of the hearing.

“They accuse me of giving instructions to prepare reports that benefit the defense strategy of the educator at the same time that they also accuse me of hiding those same reports from the court. They were? If you had wanted to protect someone, obviously, hiding information that may be favorable to you is not the best way, Don’t you think? », Has questioned.

The councilor has also denied that the surnames were hidden, as the sentence says – they appear only three times in the entire report, seven in the case of the victim – in the file of her department. Something that “is not an exceptional event” and that depends on the “professional criteria” of the person who performs it.

In addition, Oltra has pointed out the “Errors and disclosures” of the Prosecutor’s Office and the court throughout this process. The court refers to a “parallel instruction” in its ruling that the vice president has denied, explaining that, had it not requested the corresponding reports to clarify the facts as required by law, “we would have breached our obligation.”

Nor was, according to the leader, a favorable treatment given to Luís Ramirez, a worker at the residence hall since 2010, five years before the Compromís leader came to power. Oltra has pointed out that the Ministry, as it is a private center managed by a religious congregation, can neither hire nor fire workers. Of course, the educator was removed – to administrative tasks – while the investigation was being carried out and he was fired after the publication of the second sentence.

For its part, the minor was transferred to another center by order of the Prosecutor’s Office, something in which Oltra has affirmed not to agree because it implies a revictimization of the young woman.

The vice president ended her speech with an unanswered question, ensuring that the National Police knew of the existence of this case in February 2017. «Did you communicate it to the Prosecutor’s Office? Was some kind of investigation started? The sentence does not answer these questions and I, logically, cannot answer them either ».

The opposition demands the resignation of Oltra

During the hour and a half in which the debate has lasted, the opposition parties have been very critical of the vice president’s intervention and, leaving aside her personal involvement, have asked for the resignation of Mónica Oltra for the management of your Department.

“Sister, I do believe you, except if it splashes on them,” exclaimed the trustee of Vox, Ana Vega, who has regretted that Oltra has neither assumed responsibilities nor apologized in an intervention “aimed at discrediting a sentence that says the same thing twice.” “Now it turns out that it comes to judge the National Police, the Prosecutor’s Office and the judges themselves” and “to question judicial impartiality,” he assured.

“Anyone would say that the victim was you,” he added. Vega has influenced that the position of Oltra influenced the “reluctance” of the victim at the time of reporting, as also assumes the sentence. Where was she when that girl should be helped? She wondered.

Same position as the deputy of Citizens, Cristina Gabarda, who has also emphasized the “fear” of the minor to denounce because it is the husband of the vice president of the Generalitat. “The most responsible and sensible thing would have been to resign” when the facts were known, because “His situation was not the most suitable to defend the minor” since it “involved him personally.” “A sum of errors that have left a minor unprotected”, something that “neither you nor anyone else can deny,” Gabarda pointed out.

The deputy of the PPElena Bastidas has stressed that Oltra has to resign because, in her opinion, the Ministry sided with the abuser and the left refused to carry out an investigation commission on an “embarrassing” matter.

Batidas has pointed out that the vice president, who “failed”, continues to “hide behind an unbearable victimhood and absolutely unworthy of the position you hold.” «It says a lot about you that the fault lies with the judge for the wording of the sentenceand the press for the insidious information. “How much indignity,” he added. “He has been restrained by justice” for his “despicable management” and for being “a fraud as a feminist and as a politician,” Bastidas has asserted.

Regarding the groups that make up the Botanic Government, the deputy of United we can, Irene Gómez, has condemned the “scourge” of child abuse and has defended that “the aggressor is the only culprit.” “Let the Justice act without interference of any kind, without making parallel trials encouraged by the political interest to harm an adversary at any cost.” “Not everything goes,” he reiterated.

In the same line, the deputy of Commitment, Carles Esteve, has lamented that the speeches of the right “have been written for months” because “they do not care about the truth.” Finally, the deputy of the PSPV-PSOERosa Peris, has apologized to the victim because “we failed as a system” and “we have failed in many more cases.”