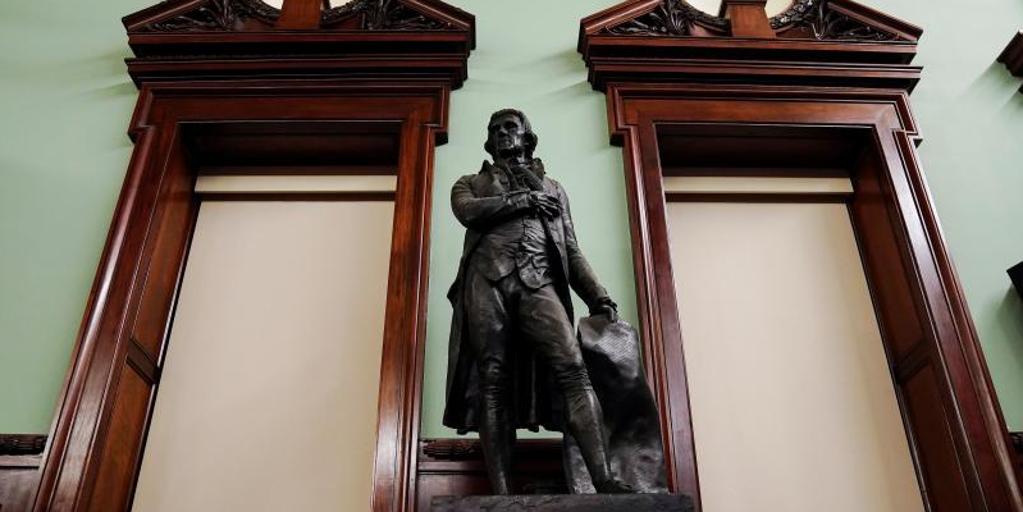 The statue of Thomas Jefferson, one of the fathers of the United States and the first author of the Declaration of Independence, will cease to preside over the boardroom of the City Council of New York for his slave past.

The decision is part of the intense debate that arose after the death of George Floyd, a black man who died asphyxiated under the knee of a white policeman and who led the movement Black Lives Matter (Black life matters).

The racial inequalities that the coronavirus pandemic left in evidence and the debate over whether the monuments of the confederates, who defended the slavery In the civil war, they should be withdrawn. They are part of that movement that has been growing strongly in the last year.

Latino and black councilors of the New York City Council had for years demanded the removal of the Jefferson statue, just over six feet tall, which for more than a century has presided over meetings in the City Hall boardroom.

Hundreds of slaves and six children with one of them

Principal author of the 1776 Declaration of Independence and third president of the United States (1801-1809), Jefferson possessed more than 600 slaves and had more than six children with one of them, Sally Hemings.

“Jefferson represents some of the most shameful parts of the long and nuanced history of our country,” said African-American councilor Adrienne Adams, quoted by ‘The New York Times’.

After heated discussions about the future location of the statue, the commission also decided that it will be transferred to the New York Historical Society, which has accepted the loan in order to ‘protect the artwork and provide opportunities to display it in an educational context. and historical ”.

“I understand why people want to withdraw it, although I do not agree. It would be good if it were accompanied by an explanation, “he said on Twitter. It would be good for everyone. You could think of all kinds of information that could go along with it. It would serve the purpose of the story, “he added.

The plaster statue, modeled after the bronze Jefferson on display in the Capitol Rotunda in Washington, was commissioned in 1833 by Uriah P. Levy, the first Jewish Commodore in the US Navy, to commemorate the support of one of the Fathers of the Nation to religious freedom in the armed forces.

Made by the celebrated French artist Pierre-Jean David d’Angers, the Washington statue was dedicated to the American people and the plaster copy reached the City of New York around 1834.

Review of US history

In 2019, the city of Jefferson, Charlottesville in Virginia, decided to stop celebrating the holiday that commemorated the anniversary of this revolutionary leader who together with George Washington, John Adams, Benjamin Franklin, Alexander Hamilton, John Jay and James Madison unified the Thirteen Colonies and led the war of independence of the United Kingdom that gave rise to the birth of the new USA in the last decades of the 18th century.

Like many regions of the world, as seen recently with Christopher Columbuswhose role has been questioned by indigenous peoples in Latin America, New York City has begun to reflect on many historical figures.

Mayor Bill de Blasio announced that it would review the city’s “symbols of hatred” following the 2017 white supremacist riots in Charlottesville, Virginia, which began as a simple protest against the removal of the Robert E. Lee statue.

Thus, the statue of the father of modern gynecology, Marion Sims, who perfected his techniques using slaves, has been removed, and it was approved at the beginning of the year to remove that of Theodoro Roosevelt, which is at the entrance to the Museum of Natural History, which is not yet it has come to fruition.